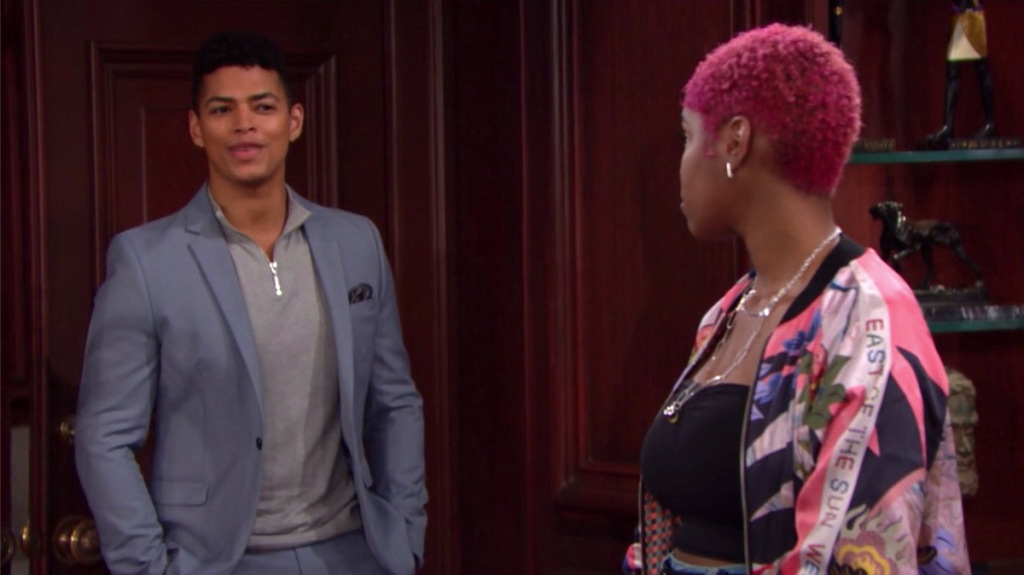 The Bold And The Beautiful Two Weekly Spoilers (January 10-21, 2022) are out, and this week will be all about shocks and confrontations. First off, in the week of January 10-14, 2022, Paris will have a visitor, and this will take Paris by shock. Then, Hope will continue feeling guilty about Brooke’s downfall. She believes that she played a role in this and would be distraught. Then, Steffy will push Taylor to pursue Ridge. Would Taylor do so?

Next, in the week of January 17-21, 2022, Taylor will start getting suspicious of Sheila and what she could be up to. Deacon will also return to L.A., and he will drop a major truth bomb. The Bold And The Beautiful spoilers also suggest that Paris will make some progress with someone. But who could this be? Here is everything about it.

The Bold And The Beautiful Spoilers For The Week of January 10-14, 2022: Zende Takes Paris By Surprise

Starting the week of January 10-14, 2022, will be Zende who will surprise Paris with something she hadn’t expected. Zende has orchestrated Dr. Grace Buckingham’s return to L.A., and this will be something that will catch Paris off-guard. While Paris will be happy for the opportunity to catch up with her mother, she will be skeptical about Zende’s motive to bring her mother to the town. She will feel that Zende is doing all of this to talk her into getting married.

While Paris reels about this, Zende will open up to Carter and tell him about his fears regarding Paris. He will tell him that he is afraid that he might be losing Paris to some other man. B&B viewers know that Carter and Paris kissed this New Year’s Eve. So, he will be feeling guilty about this.

More related spoilers suggest that Grace will meet and settle in with everyone in Los Angeles and get to know more about Paris’s life in L.A. Although, as per Tv Season & Spoilers, Paris’s mom might start feeling a little troubled with the way Paris is living and push her. So, that might create some troubles there.

On the other end of the town, Hope will blame herself for Brooke falling down the wagon. She will feel that she pushed Brooke too far and caused her downfall. However, Liam will be by her side and assure her that it isn’t the case. He will give her the extra support she needs.

Blaming herself isn’t all that Hope will do. The Bold and the Beautiful spoilers confirm that she will confront Steffy and Taylor and ask them to stay away from her mother’s marriage. Hope might feel that these women contributed to Brooke’s drinking because they are interfering in her marriage. So, this will be interesting.

Speaking of Brooke, she will continue lying at her A.A. meeting and try to establish that she was indeed alone when all of this happened. While she will be feeling guilty for lying, she will get some great advice, and that will lead to her making a big decision.

The Bold and the Beautiful spoilers suggest that Hope’s ultimatum will work in a way she hadn’t expected and push Steffy to try and bring Ridge and Taylor together. Until now, she was just hoping for a reunion, but now, she will start working for it.

In the week of January 10-14, 2022, Steffy will pressure Taylor to fight for Ridge. She will want Taylor to pursue what she really wants. But Taylor will turn Steffy down. Taylor will admit that she still loves Ridge but will also make it clear that she has no intentions of breaking up with him and Brooke.

After trying to push her mom, Steffy will move to Ridge. She, along with Thomas, will come up with a theory that Deacon could be involved in this whole Brooke breaking her sobriety situation. Ridge was already suspicious of it. So, when Steffy and Thomas push on that, Ridge reels about it. A part of him will want to believe Brooke, but it will be difficult.

Back with Brooke, she will have an emotional conversation with Hope in the upcoming days. It looks like Hope will try to get her mother talking about why she pushed Deacon away. Tv Season & Spoilers suggest that she will want to know what happened on New Year’s Eve and why Deacon has disappeared? Hope knows that something has gone down there, but she will want exact details. Will Brooke tell her the truth? We will have to wait to know.

The Bold And The Beautiful Spoilers For The Week of January 10-14, 2022: Sheila’s Plan For Destruction

Rounding off the week of January 10-14, 2022, will be Sheila, who will continue working on her scheme to take Brooke down. When she comes to know that the first part of her plan worked so well, she will think about her next move. Knowing how Sheila is, she will indeed come up with a diabolical plan. But we will have to tune in to know what she really does.

Sheila’s actions will start making many B&B characters suspicious, and on the top of the list will be Taylor. Taylor will start getting concerned over what Sheila could be planning. It looks like she will get some hints or clues that will make her believe that Sheila has some hidden agendas and they are far from pure. Taylor will particularly think about Brooke and how Sheila is related to her downfall. So, it will be interesting to see if she connects the dots.

On the other end of the town, Deacon will resurface, and he will pay Brooke a visit. Not just that, but he will deliver her some shocking news upon his return. So, could Deacon have figured out how Sheila’s plan? Would he tell Brooke that Sheila switched the champagne? Alternatively, it is also possible that Deacon might tell Sheila the truth about what he feels.

Rounding off the week of January 17-21, 2022, will be Paris and Carter, who will continue growing closer. In fact, they will take another step in the romantic territory, and it will become increasingly difficult for Zende to accept.

How will he react that the other man in Paris’ life is none other than Carter? We will have to wait to know. We know it will be all exclusive when the news comes out. So, make sure you tune in and enjoy. The Bold and the Beautiful airs on CBS all weekdays.