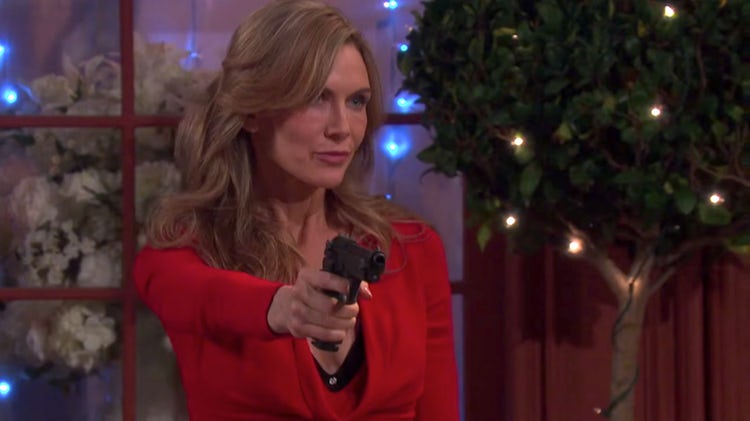 The latest Days of Our Lives reports reveal that there is a very shocking exit coming up at the soap opera. It is none other than Kristen DiMera. She will soon leave the town. Right now, the character is involved in the Victor stabbing. Here is everything about the exit and current storyline

Actress Stacy Haiduk Took On Her Social Media To Talk About Her Exit From Days of Our Lives!

Actress Stacy Haiduk took onto her Instagram to talk about her abrupt exit from Days of Our Lives. She wrote that Fans now know that Kristen is leaving, but let’s not write off Kristen right now. Stacy suggested that nobody really goes away from Salem, and she is a Phoenix. She continued that Kristen, Brady, and Rachel’s journey has been amazing. The two characters have worked really hard for the past year. She thanked her fans for their support. She continued to say that she Loves their support and enthusiasm.

Kristen Really Has Had Quite A Journey!

Haiduk joined the soap to step into Emmy winner Eileen Davidson’s shoes. She dove into the character and really captured the essence of the character: Kristen’s fiery rage and vulnerability. Haiduk really has made Kristen a powerful character that can command the room.

Last year, Kirsten and Nicole came face to face. Not just Nicole, but Kristen has made many Salem residents apologize for their actions. Over the span of time, viewers have seen different moments with the characters ranging from tender, heartbreaking moments to mourning to joy and everything in between.

Days of Our Lives: How Will Her Exit Storyline Playout?

The latest Days of Our Lives spoilers reveal that Kristen will finally locate Sarah Horton and her baby daughter Rachel in Paris. She will go and enjoy this reunion with her baby. However, she will then realize that it won’t last long. Kristen recently stabbed Victor and hence is wanted back in Salem. To discuss her next moves, Kristen will contact Brady, and he will make a tough call. He will tell the woman that she should go on the run with Sarah and Rachel. She will be arrested on site if she comes back.

Not just Days of Our Lives, Stacy Haiduk, has been a part of many soaps. She was a part of All My Children as Hannah Nicoles, then she played the dual role in Young and The Restless, later on, she came in Days of Our Loves in 2017 and has been here since then. Now, she is leaving. Once the production is back on track, it will be no shock that the actress becomes a part of some other show. Stay tuned with TV Season Spoilers to get Days of Our Lives Spoilers and updates for upcoming