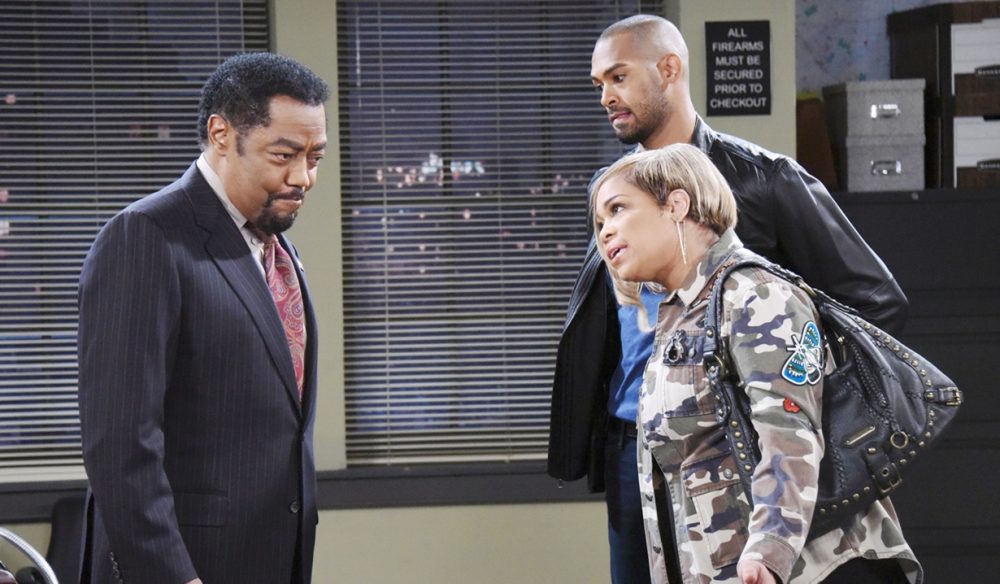 Days of Our Lives Spoilers: Arguments in Salem, Abe To Fire Sheila?

As the week comes to a halt Days of Our Lives Spoilers tease there is going to be no shortage of arguments all over Salem. The fans of the show are going to witness Lani Price (Sal Stowers) and Eli Grant (Lamon Archey) making an attempt to build a case against another star, Xander Kiriakis (Paul Telfer).
Xander has been accused of creating immense chaos in Salem over the past few years. He has left no stones unturned in disrupting others’ lives by escaping with convicts from the prison, and so on. All in all, he has been a great trouble to most of the town inhabitants.

Days of Our Lives Spoilers: The Captors In The Warehouse

Recently he was holding Holly Jonas and her mother Nicole Walker (Arianne Zucker) prisoners in Nashville. Kristen DiMera was also working with him. She supported him in holding the citizens presumed dead as prisoners. The resurrection serum by Dr. Rolf was used to bring the warehouse captures back to life.
Jack Deveraux, EJ DiMera, Vivian Alamain, and Andre DiMera were also behind the closed doors of the warehouse. However, there is a possibility that Lani and Eli are going to face difficulties in proving Xander’s crimes and putting him behind bars.

What’s Going To Happen With Sheila and Abe?

In the meantime, Sheila is going to get a piece of Abe’s mind. As soon as he realizes that Sheila has done a mistake that is going to cost him, fans will see a furious side of his personality. In the constant battle of jobs at the Mayor’s office, Abe and Sheila have made it clear that they are not at all getting along. It seems like Abe has been look ing for a reason to fire Sheila from her job. It seems like her current mistake can be the required push.
Days of Our Lives Spoilers also reveal Stefan DiMera and Gabi Hernandez are going to argue about the future of Gabi Chic. Gabi stayed on to be the face of the brand even after selling the company to DiMera Enterprises.

Is Stefan In a Legal Trouble?

It seems like Gabi might fight to take back her company from Stefan. This is evident from the fact that Stefan might be in legal trouble.

In the latest #DAYS, things get heated between Chad and Gabi, Eli arrests Xander, and Hope struggles with some news. https://t.co/ZsCmioRrzb pic.twitter.com/p66BwdvkvZ

Another storyline includes Hope getting involved with Ted Laurent. This can lead to a spat between Rafe Hernandez and Hope. Lately, the couple has been involved in a lot of disagreements. This has left fans wondering whether another split is on its way.

DOOL Spoilers – Summing It Up

All in all, it is safe to assume that there is a lot of drama coming in the way for fans. The disagreements in Salem are sure to add fuel to the fire. What do you think the future holds for Xander? Will Abe fire Sheila, taking advantage of her mistake? What do you think is going to happen with Hope and Ted? Will they make it? Let us know in the comments below. Stay tuned with TV Season Spoilers to get Days of Our Lives