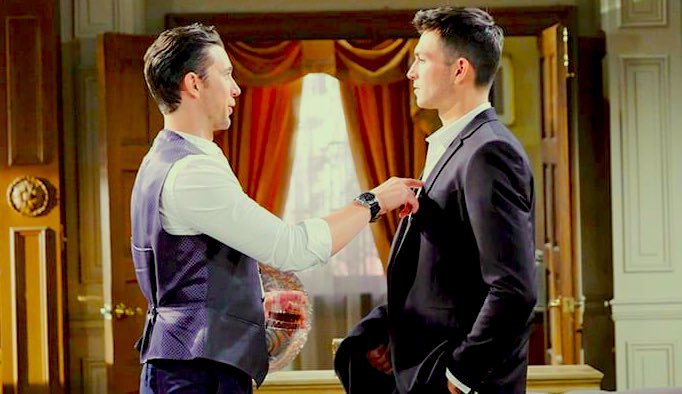 'Days Of Our Lives' Spoilers: Ben To Get Earful For Kidnapping Gabi, Chad Asks Ben To Leave Ciara

Days of Our Lives Spoilers for Tuesday, January 8 hint towards a day of hard-hitting for Ben Weston (Robert Scott Wilson). Ciara Brady (Victoria Konefal), Chad DiMera (Billy Flynn) and Gabi Hernandez’s (Camila Banus) take on him will shake him up completely and it is to see how will Ben react to this? Abigail will reveal everything about Ben to Ciara.

Ciara Will Learn The Truth About Kidnapping

Ciara believing that Ben is a changed man now and has fallen for her. But, Ben’s involvement in Gabi Hernandez’s kidnapping and his work for Stefan DiMera (Tyer Christopher) at DiMera Enterprises disappointed her. She will get to know that for Stefan’s dirty work, Ben has gone beyond the limit and broke their understanding that he would not do any questionable thing.
However, Ben’s concept of questionable doing is different from Ciara. He still believes that he hasn’t done anything wrong and hasn’t crossed his limits. Whatever he did was for his boss.

Ciara Is Unhappy About Kidnapping

Hope Brady (Kristian Alfonso) used the word kidnapping to keep Ben away from Ciara and put fear into Ciara’s head. He knew that Ciara would be unhappy to learn about the kidnapping. Later, Ben will be asked to rethink about his work for Stefan DiMera. But, quitting Stefan’s job will once again leave Ben jobless and homeless.

After a heated argument with Ciara, Ben runs into Gabi Hernandez who he had kidnapped earlier and he moved to make his day worse. Since the kidnapping, this is the first time when Gabi is meeting her kidnapper Ben. Days of Our Lives

Spoilers says that Ben will get an earful.
Gabi will leave nothing to tell him about his wrongdoing of kidnapping her. Now, it is to see to what extent Gabi’s words and Ciara’s argument with Ben will affect him! Only the upcoming sudser will tell whether Ben will reconsider his job with Stefan or not!

https://twitter.com/Maddie48330160/status/1082309565255950342
Bad time continues for Ben. After Ciara and Gabi, now Chad is to make his day bad. Firstly, Ciara and Gabi asked him to rethink about working with Stefan and then Chad reveals that Stefan is removed from the post of CEO of DiMera Enterprises and more shocking he is the new CEO of DiMera Enterprises.
Ben thinks this would not affect his work commitment for DiMera Enterprises as he worked for Chad recently in kidnapping Abigail Deveraux (Kate Mansi), so Chad will let him continue work. But, his assumption is wrong. Chad let Ben know that he doesn’t want Ben to continue working for DiMeras. Ben will get an earful from Chad and he has also issued a warning. Chad asks Ben to leave Ciara but Ben would not do that at any cost. He loves Ciara and is not ready to give up on her.

DOOL Spoilers – Romance Is In The Air For Chad

Chad is leaving no stone unturned to make it bad for Ben. On the other hand, he is to involve in a more romantic time. He wants to spend quality time with Abigail Deveraux and in this, Julie (Susan Seaforth Hayes) will help him. Stay tuned with TV Season Spoilers to get Days of Our Lives

"I want to keep my job, Ciara. But I do not want to lose you over this. You mean way too much to me. You are the most important thing in my life."