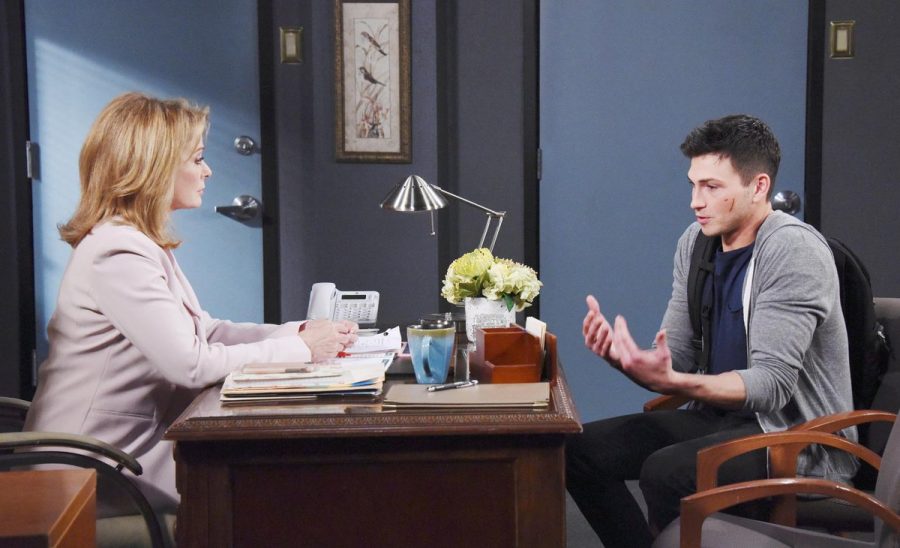 'Days Of Our Lives' Spoilers: Claire's Secret Is Out! Marlena's News, Will's Fate

Days Of Our Lives Spoilers for the upcoming episodes have a lot for fans to have to pause to sink in. With so many surprises coming up and all the drama unfolding with different characters, intense scenes are a sure thing. Claire is going to be in great trouble. And Ben won’t keep quiet this time. Marlena’s news is going to shock the viewers. Moreover, if Rolf’s diary doesn’t reach on time, Will’s fate might get a little unpredictable. Let’s take a look as to what the show has to offer in the upcoming episodes.

Even though Will’s tumor is not cancerous, it is rapidly growing and is likely to kill him in a matter of days if they don’t find Dr. Rolf’s diary. Eve last had it. Only now, Xander is in possession of the miraculous cure that can bring Will out of his agony. Eve is compassionate for Will’s situation. She might use her powers as the police commissioner to snatch the diary out of his hand. However, if Will hands over that diary to Sarah in lieu of impressing her, things might get better for Will.

In the latest #DAYS, John makes an emotional appeal for Eve’s help on behalf of Will.https://t.co/ZsCmioRrzb pic.twitter.com/kW5S7E2ptT

Days Of Our Lives Spoilers: Will’s Luck Likely To Turn Around

Even though Will is going to start to accept the imminent fate, Days Of Our Lives Spoilers indicate that his luck might give a whirl. This means that John’s ef forts to bring the diary in time might actually bear fruit in the near future. Will said to Marlena that his condition is getting serious and he might really die soon. Of course, she doesn’t want her grandson to give up. Speaking of Marlena, Claire will turn to her for guidance. Her guilt will start to get the fire confession out of her only to get interrupted by Tripp’s call.

Even though Claire doesn’t confess about the fact that she was the one starting the fire, her ringtone might not let her keep that kind of a big secret for long. Tripp calls her up to mention that he is going to meet up JJ and Steve. In reality, he is just lying and going to see Hayley. But Claire will be grateful that Tripp at least reached out.

Claire will overhear Ben speaking to Ciara and panic. She leaves Eve a voicemail and asks her to call her back. However, her call comes in way too soon. Soon enough for Ben to hear Claire’s ringtone. During the hypnosis session, Ben wasn’t able to see anything. But the sound of the ringtone was clear. According to the latest Days Of Our Lives Spoilers, Ben will realize that Claire is the real culprit. He will come to the conclusion that she set the fire. Will he be able to figure something out in time? Let us know what you think in the comments below. Stay tuned with TV Season Spoilers to get Days of Our Lives