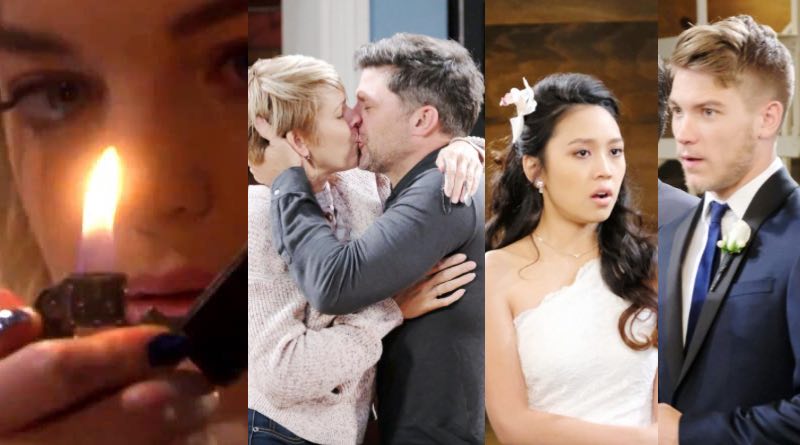 When we think of a roller coaster ride in the soap opera universe, it’s impossible to imagine it without Days Of Our Lives crossing our mind. It’s always fun to watch the dramatic soap opera filled with crazy plot twists. But do you know what’s even more fun? Speculating the turns the storyline could take in the upcoming episodes. On that note, let us take a look at the plot predictions for May 2019 for Days Of Our Lives.

Days Of Our Lives Spoilers: Claire’s Unstable State Of Mind Can Get Her In Trouble

Claire is behaving in an irrational way and speculations suggest that she is likely to be placed in the same facility as Jordan. At some point, the actress can also be recast since the one playing Claire is about to make her exit from the show sometime in summer. Ciara and Ben can investigate the fire again which can lead to big changes in Clair’s life.

The fact that Holly has being kidnapped won’t go well with Maggie. Losing a grandchild will cause her to spiral back to her drinking addiction. She has been through a hell lot in her life. When she lashes out, it might also affect her marriage with Victor. With an addiction problem in hand, Maggie can create some big pitfalls in her personal life.
Speaking of Holly, there are chances that she might not survive the kidnapping. The actress playing Chloe will leave the show. Chloe might leave Salem after Holly passes away. Nicole will already be furious at her for making poor parenting decisions.

DOOL: Eric, Nicole And The Search For Holly

In the latest #DAYS, Eric is reunited with Nicole!https://t.co/ZsCmioRrzb pic.twitter.com/nSo713vcUU

Eric, Nicole, and Hope are likely to land something horrific when they finally reach Holly’s kidnapping destination. This could mean some real tragic bad news for the little girl’s family. According to speculation, she couldn’t make it. This plot twist has the potential to modify the entire storyline. Even though Eric and Nicole are soulmates, they won’t be able to stay close for long due to the tragedy. nicole is likely to lash out at Eric in this case. After all, it was Eric who was supposed to take care of the little girl. She handed it over to Chloe which hasn’t gone well with Nicole. However, if Holly survives, they can get a lot closer as a family.

What Is Going On With Rafe, JJ, Jack, and Abe?

Rafe’s job is already in danger with Holly’s kidnapping. When he finds out that Ted has something to do with the kidnapping, it can further push him apart from Hope and bring him closer to Lani and baby David. JJ is likely to announce something that is going to make Jack look bad. The fact that Jack raped Kyla might come up. Jack is likely to highlight Abe and Sheila’s budding romance with Valerie back in town. Stay tuned with TV Season Spoilers to get Days of Our Lives