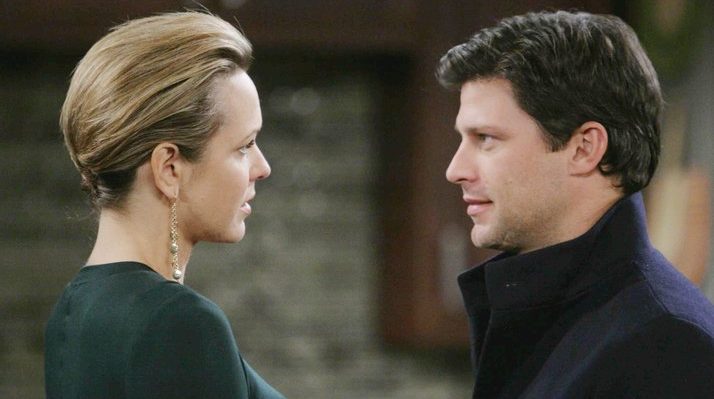 Days of Our Lives Spoilers: New Cast Member and Nicole Back In Salem

According to Days of Our Lives Spoilers, there will be a new face to see on the screen along with an old character making an entry. The show will have two characters coming up who will change the storyline. One of them could be Robin Strasser who will be a new addition, and the other will be Nicole Walker. Meanwhile, everyone will point fingers at Kristen for Marlena.

Days of Our Lives Spoilers: Who is Robin Strasser?

DOOL spoilers hint that Robin Strasser will be seen in Salem. At the moment, the team is keeping the plotline regarding her a big secret. The show is yet to figure out who will play the character. Maybe she will be around for quite a while, or perhaps she will just be a small entry to stir trouble for the people of Salem. However, the team knows more about the second character. Arianne Zucker is officially making her way to Salem as Nicole Walker. With her comeback, one thing is sure, and there will be a lot of controversies to cover.

Nicole is Back To Stir The Plot

Can Eric rescue Nicole from certain death? Watch Days of our Lives, weekdays on NBC. pic.twitter.com/C3NQ7FnNPe

DOOL featured her last when Nicole was in Memphis, trapped in a burning warehouse. Although Eric Brady and Brady Black did all they could to save her, they could only keep her daughter, Holly Jonas. Since then, everyone thought that she died. Eric was heartbroken after he realized that his love interest is no more. So, he turned his attention to Holly. He fought Chloe to keep her custody, but he eventually lost. Meanwhile, Eric tried to move on, and Sarah Horton helped him through this. He developed feelings for her, but he doesn’t know what to do with them since she is with his brother, Rex Brady.
There will be drama as Nicole comes back to the scene. This could mean that he will have to choose between Nicole and Sarah.

DOOL Spoilers: John Finds Out that Marlena is Unconscious

John figures out that Marlena is unconscious, spilling out the Diana drama. She knows what she did, and John thinks that she is the culprit. But there is a sudden twist when everyone blames Kristen. This was obvious because she did have problems with Marlena. Diana takes this as a hint to be near John and why wouldn’t she? He is the father of her son in the end. But her secret comes out when John spills the “truth” to Leo. The news will spread in no time, Brady will be furious. Meanwhile, Leo will seek Stefan’s help to get some protection.

To come between John and Marlena, Diana carries out a deadly plan. Watch Days of our Lives, weekdays on NBC. #DAYS pic.twitter.com/mmKFF7dEH7

Days of Our Lives Spoilers will also hint that Claire will be out to get Haley as is Jack. Moreover, the risk of getting caught by the police is increasing day by day. Something big has to be done to keep her in the states. It turns out, JJ will have a plan but before they could execute it. They will try to figure out who ratted her out in the first place. Ciara could be a good guess as she is the commissioner’s daughter, after all.
Meanwhile, as the spoilers say, Griffin Kunitz might come back. He will play the role of Jonny DiMera who is the son of Sami Brady and EJ DiMera. The young boy has been away since the time Sami took him along with his siblings out of the city following EJ’s death. But it turns out that EJ is still alive and Sami took him away to get him treated overseas.
What will happen when Nicole makes an entry? Who will play Robin? Will JJ’s plan work? Stay tuned with TV Season Spoilers to get Days of Our Lives