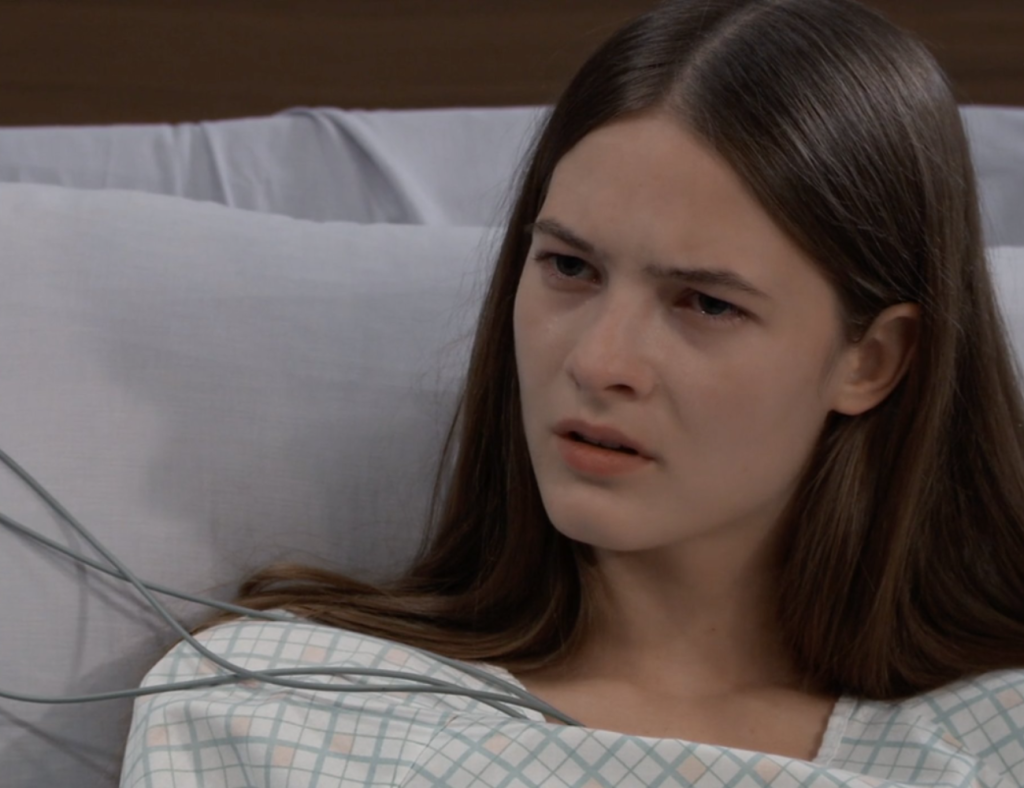 Ever since Esme returned to Port Charles and revealed her pregnancy to Nik at General Hospital, she has been in imminent trouble. Nikolas kept her hostage in the north tower of his castle for months. Eventually, tired and scared for her life, Esme jumped off the parapet in hopes of escaping. Thankfully, she survived the fall and landed in the hospital. But, Esme’s troubles are far from over as Liesl has revenge on her mind, and she believes Esme to be responsible for Britt’s death.

Esme Price And The Hook Killer

Recently, on General Hospital we saw The Hook Killer attack Joss at the pier. However, luck was in Joss’s favor, and Dr. Britt intervened and rescued her. However, she sustained a cut from the killer’s poisoned hook. Moments later, the injury tragically claimed Britt’s life on The Haunted Star. Later, the injured Hook Killer took off her mask. We were shocked to see that the face hiding behind the sinister mask was Heather Webber. However, this is a revelation that unfolded only for the audience’s eyes. The citizens of Port Charles are still unaware of Heather being the psycho killer.

Moreover, now that Esme being alive has come to light on General Hospital, the earlier doubts about her being the Hook Killer will be confirmed for PC residents. From the time that the Port Charles Police Department connected the dots to conclude that the Hook Killer is a woman, all fingers had been pointing at Esme. However, Esme, for once in her life, is innocent. But will that matter? Will she be able to defend herself, especially now that she has lost her memory?

Esme’s latest fall from the Cassadine parapet has landed her in the hospital bed. Moreover, it has placed her in the direct line of fire of Dr. Liesl on General Hospital. The Latest spoilers for the ABC soap hint that Liesl has revenge on her mind after tragically losing her daughter, Britt, at the hands of the Hook Killer. Amnesia struck Esme is the perfect sitting duck at the moment. Dr. Liesl enters Esme’s hospital room dressed in Dr. Britts coat and ID to check up on the patient. Esme asks her if she can get something stronger to help her sleep. Dr. Liesl says, “that can be arranged”. Was there a hint of menace in her voice? Is Liesl planning on attacking Esme in the hospital?

Surely the mother is falling apart internally after her daughter breathed her last in her arms at General Hospital. Seeing a hapless Esme in front of her, whom the whole town suspects of being the Hook Killer, will certainly tempt her to seek revenge. But will Liesl do it? Will she back off once she realizes that Esme is pregnant? Or will dhe resolve for revenge get stronger seeing that she can hurt Esme’s baby in turn for Esme killing her daughter? Please share your views in the comments below. Meanwhile, stay tuned to ABC to find out what happens between Esme and Liesl at General Hospital.