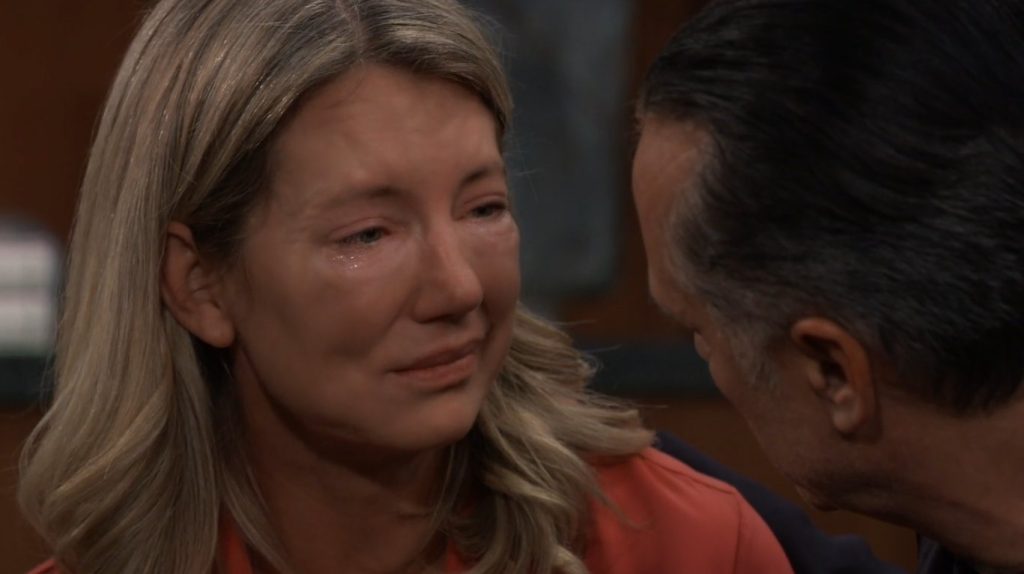 General Hospital spoilers for January 19, 2023, reveal that Nina will panic over her test results in the forthcoming episodes. Although she is waiting for the results, she won’t be able to stay calm. Her priority is to save her daughter, and she will want to rush the whole procedure. In the meantime, Liesl will also get updates about Willow’s critical condition. Elsewhere, Sonny will grill Carly and will push her to answer what he wants to listen to. Keep reading to know what is going to happen in today’s GH episode.

First, Sonny will push Carly to come clean, at least to him. Sonny feels like Carly is telling everyone only the half-truth and hiding some important facts. General Hospital spoilers claim he will accuse Carly of deliberately keeping the secret and letting Nina suffer. It was all Carly’s plan from the start to hide such massive information and seek revenge on Nina.

However, Sonny won’t get what he is pushing for. Carly will continue to deny that she ever intended to hurt anyone but rather just wanted Willow to stay away from Nina. No matter how often Carly tries to put forth her thoughts, Sonny will remain in denial and accuse her of seeking revenge. Michael will also struggle with forgiving his mother, but Willow might convince him to do so down the road.

Over with Liesl and Austin, they will get a shocking update soon. The General Hospital spoilers say this will be about Willow’s health and how Nina is the birth mother. While Nina is an emotional wreck, Liesl will be there to support her. The bone marrow results are not out yet, so Nina will panic over everything that might happen in the future. Liesl also lost Britt, so she will know exactly how Nina is feeling.

General Hospital Spoilers: Josslyn-Spencer Get In An Argument

Later, Spencer will lash out at Josslyn for breaking up with his best friend for Dex. General Hospital spoilers say Josslyn will also lash out at Cameron for picking sides. Although Josslyn cheated on Cam before break up, she will still feels like Spencer is wrong. Cameron will be fed up with Spencer’s outburst and will ask him not to fight for him to this extent.

Speaking of Dex, he will meet with Michael and will insist that they need to put an end to their partnership. Now that he is falling deeper in love with Joss, he won’t want to continue his shady business. However, he will still reassure Michael that he is still up for the takedown plan and is trying his best o get important leads. Will Michael put a pause to their planning and plotting while he is already dealing with such a huge problem regarding Willow? Stay tuned and watch General Hospital, it airs every weekday on ABC. For more updates and spoilers, visit our website, TV Season & Spoilers.