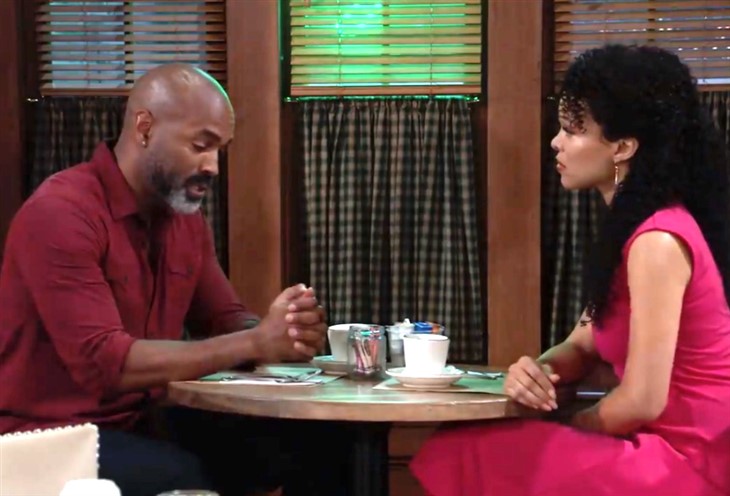 The latest General Hospital spoilers for the upcoming Tuesday, March 23, reveal that the episode will kick off with Curtis and Portia getting closer. Curtis is now preparing for the big shift in his career. So, he will express his gratitude to Portia. It looks like he will give Portia some credit for helping him in finding his new path as a nightclub owner. She will be thrilled to start this next adventure of life.

More Curtis-related news suggests that Trina Robinson will apologize to Curtis in the upcoming days. Trina will let Curtis know how sorry she is about how she treated him when she thought Marcus Taggert was dead. Spoilers say Curtis will not hold that against Trina since she was dealing with such a hard time. He will just hope that Trina and Taggert would be able to get their relationship back on track.

General Hospital Spoilers reveal that Cameron Webber will be really determined, and he will catch Laura Collins off guard. In the preview video, Cameron said that he needs to make sure that Jason pays for doing what he did to Franco. It looks like Cameron will push Jordan into doing whatever she needs to to make sure that the charges against Jason stick. Laura will be really shocked. She will warn him that everyone is aware of their jobs at the PCPD, so he does not remind them that. Laura will be concerned that Cameron is taking matters into his own hands.

Other spoilers reveal that Hamilton Finn will visit Elizabeth Baldwin to show her his support. Finn will offer his condolences and see how Elizabeth is holding up. However, Liz will want to talk to Finn about the problems he is facing. Now that Invader has published an article titled “Who’s the daddy” about Jackie Templeton, Finn will admit that his private life is now becoming public. And Liz will offer her sympathy. Finn will open up about the struggles he is facing with Harrison Chase as well as Anna.

In the upcoming episode, Brook Lynn Quartermaine will elaborate on her plan on how she would use the baby to get back the control for ELQ. In the Tuesday episode, viewers can see Brook saying if her plan isn’t a win-win situation, she does not know what to do. Brook will try to convince Ned and Michael Corinthos that she has everything under control. However, the two of them will think that she is playing with fire by doing what she is planning to.

General Hospital: What Would Valentin Do?

Viewers know that Valentin is a dangerous man and he does not backs off from a fight. So, there is a huge chance that Brook Lynn’s plan could backfire very easily. Valentin will tell Martin Grey that the last thing he wants is a way out from the whole situation. Martin might assume that Valentin might want to wiggle out of the responsibility and pay his baby problem to go away. However, Valentin will assure Martin that he wants to be a part of this child’s life and do everything he has to in order to make sure that he has a role there.

Jax Tries To Figure Out Where Nina Is

Spoilers say that Jasper “Jax” Jacks will work and try to figure out where Nina Reeves has gone. Carly has encouraged Jax to track Nina down, but he has no idea where he should go looking. More spoilers say that Jax and Carly will bump into Ava Jerome Cassadine, and Jax will wonder how much Nina had told her. However, Nina did not reveal those details even to Ava. In fact, Nina did not know where Nina was going until she saw the exit sign for Nixon Falls and decided that she should go and visit Phyllis Caulfield.

While Nina was at Tan-O and was heading out the door, she realized that she had forgotten her passport so, she went back to retrieve it. Spoilers suggest that when she goes back, she will be visibly taken aback because she will see Sonny. In the Tuesday preview video, viewers can see Sonny saying in the video that he knows her. It looks like Sonny will have a moment of realization.

Viewers know that Sonny has been dreaming of a blonde lady from his past lately who really is Carly. But when he sees Nina, he will assume that she is the lady he is dreaming about all because of the similar resemblance. Would “Mike” start pushing Nina for answers? This is a great setup to confuse the man between Nina and Carly.

General Hospital spoilers say that Nina will make some very tough calls when she comes to know that Sonny is, in fact, alive. What will she do? We will have to wait and watch. Tvseasonspoilers.com will keep bringing you all the updates about soap operas. So, you stay tuned. In the meantime, check out the sneak peek video here.