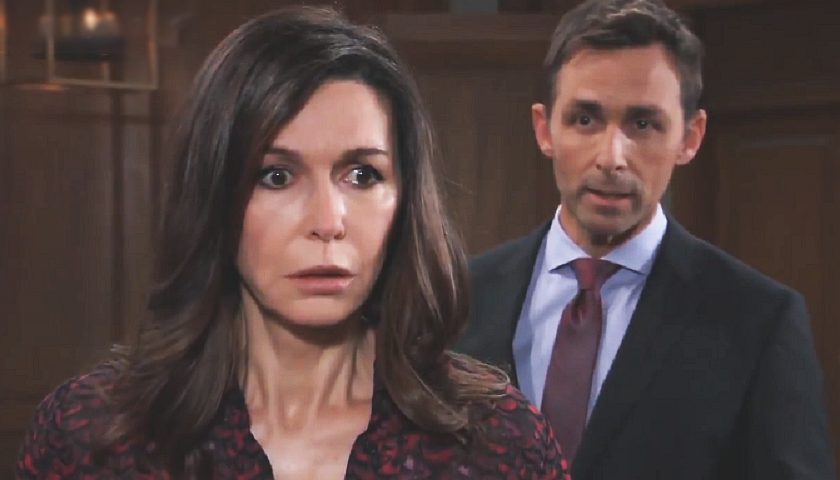 General Hospital Two Weekly Spoilers: Anna and Valentin Kiss, Maxie and Brook Get Into An Argument

General Hospital two weekly Spoilers, 5-16 July 2021, suggest that sparks will fly between Valentin and Anna. Spencer Cassadine will be back in Port Charles, “Mike” might also plan to come to PC. Carly will get suspicious about something. Brook Lynn will have another argument with Maxie, and that might lead to some troubles. Will Brook and Maxie’s truth come out? Keep reading to find out-

Spoilers For The Week of July 5-9: Anna and Valentin’s Kiss

As we move into the week of July 5-9, Anna will get an Independence Day surprise when Valentin kisses her. Spoilers suggest that Anna will burn her finger on a sparkler. So, Valentin will kiss it to soothe it a little. Right after that, he will plant a kiss on Anna’s lips. When this happens, Anna will suddenly pull away and act like this should happen. However, Valentin will make a point where he will say that the two have been actually building for this. He will push Anna into accepting that the connection between the two of them is deepening, and he wouldn’t see why they should run away from it. How will Anna react to this? Will she let go? We will know soon.

While Anna and Valentin decide what they want to do next, Britt will meet with Jasper “Jax” Jacks, and they will talk about their romantic experiences. Then, they will toast on a single life. While the two of them discuss this, they will make a plan to see the Fourth of July fireworks together. Spoilers say that the two of them will have a pleasant night.

Elsewhere, General Hospital spoilers suggest that Maxie will do something that might cause Brook and the plan more problems. Spoilers indicate that Brook will be really concerned, and she will corner Maxie. She will want to know why Maxie is doing all of this. More related spoilers suggest that Monica Quartermaine will give Brook a warning. She will remind Brook that Maxie is going through a challenging phase. So, she should be considerate.

At the graduation party, Trina Robinson will struggle to follow everything that has happened at the gallery. Ava will be distraught for Trina. She will think that Trina might get a trauma after everything that happened. Over at the Nixon Falls, Phyllis will poke Sonny yet again. She will tell him that it is time he goes to Port Charles and sees Nina. Will Sonny do so? We will know soon.

General Hospital Spoilers For July 12-16: Suspicions In The Air

General Hospital spoilers suggest that Austin will have a conversation with Carly about the Michael Corinthos wing at the GH. After this conversation, Carly will start getting suspicious of who Austin is and what his motives are. Speaking of suspicions, spoilers suggest that Nikolas Cassadine will be reunited with his son, and he will be surprised. Spencer won’t be able to keep hiding for very long. So, he might reveal that he is back. Nikolas will be more than happy to have his son back. General Hospital spoilers suggest that Spencer will act like he has accepted Nikolas and Ava’s marriage to avoid suspicion. He will act like he is very sorry about the split, but he will continue causing Ava and Nikolas trouble.

Spoilers also suggest that Curtis will scold Stella Henry for meddling in his life. After that, he will clear things out with Portia. He will not like for Portia to run away from him. More General Hospital spoilers suggest that Scott Baldwin will make a huge announcement. Speaking of making things better, General Hospital spoilers suggest that Brando will sit down with Sasha and break the walls she has built around her. He will find out what is really bothering Sasha.

General Hospital spoilers also suggest that Maxie will reach out to Nina for some advice. Brook will be more concerned than ever after this. Nina will catch Brook off guard. Will Nina come to know the truth about Bailey being Louise? Will she promise to keep the truth hidden? It looks like so. Speaking of Nina, General Hospital spoilers suggest that Sonny will make up his mind to visit her. He will wait for Lenny to come back home, and after hearing everything about his health, he might head to Port Charles after that. Phyllis might offer “Mike” some words of warning that he might want to keep in mind. It looks like Phyllis will tell him to be careful with Nina’s heart. What will happen when Sonny comes to Port Charles? A lot of exciting drama will roll. General Hospital is bringing some fascinating storylines. Don’t forget to tune in and enjoy. General Hospital airs on ABC all weekdays.