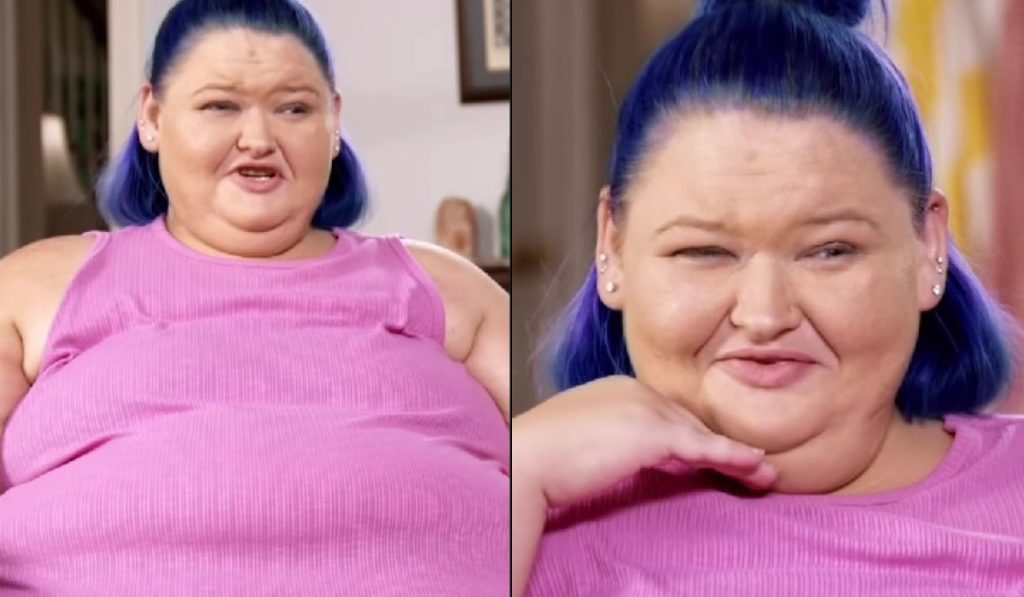 The fans of 1000 Lb Sisters were eagerly waiting for its new season. Well, it’s finally here, and fans are enjoying watching the Slaton sisters on screen. While Tammy is working hard to meet her weight loss goal, Amy is busy working on her new look. The TLC viewers are in for a real treat with Amy Slaton Halterman’s new mommy makeover. However, fans are happy to see Amy doing good after giving birth to her second child in real life. On the other hand, the reality TV personality is currently experimenting with her style to enhance her looks on the show. During the premiere of the shoe, fans witnessed how Amy colored her hair which completely shocked her family. While fans love her new makeover, her family members are mocking her. However, fans rushed to take her side. Let’s see what they have to say.

1000 Lb Sisters: Fans Were Impressed By Her New Look

The 1000 Lb Sisters star Amy Slaton doesn’t wait for things to change her life. Instead, she grabbed every opportunity that came along her way. In the recent episode, Amy told how she decided to color her hair blue. While seating at the salon, Amy instructed the hair designer to dye her hair according to what her baby Gage agreed. And that’s how she got her hair colored blue. Amy unveiled her hair makeover on the debut of her show. Fans adore her look, but her family members were not impressed by her decision. The TLC celebrity often wears brunette hair, but the Slaton sister has decided to change her appearance drastically. However, her change of blue hair from her regular brown hair appears to be the top of the talk among her fans.

TLC recently shared a video clip from one of the recent episodes of 1000 Lb Sisters. In the video, Amy proudly approached her family while walking along a dirt road, flaunting her new appearance. She wore a yellow floral dress while walking towards her family members with her husband and son. However, her family turned around and looked in surprise. They started laughing at Amy and called her a “bruised banana”

. Fans immediately took to the comment section to defend her decision and slammed her family for mocking her. Fans said they like her new hair color, and it suits her. On the other hand, fans felt heartbroken watching the sense. People who make fun of others about their appearance need a serious personality makeover. One fan even said that the comments coming from her family “were mean”.

1000 Lb Sister: Amy’s New Look Was In Honor Of Her Second Child?

The 1000 Lb Sisters viewers were not surprised to discover Amy’s new hair makeover. Rather the fans were happy to see Amy adopting recent changes in her life after giving birth to her son. Followers of the show were pleased with the new transformation and said the star looked great in its unique color. However, the blue color immediately made viewers question if her second baby was the reason for the color. While holding her kid in one of her posts, Amy smiled and appeared happy. On July 5, 2022, Amy gave birth to her second baby Glenn through C-section. Glenn was born healthy, weighing 5 pounds, 11 ounces, like his big brother Gage.

Although, TLC has not yet featured the episode about Amy’s second child. But fans have already watched his growth due to her active social media pressure. However, according to the 1000 Lb Sisters star, Glenn loves sleeping, eating, and playing with his elder brother, Gage. Also, Amy recently celebrated Glenn’s six months birthday. While she also shared an interesting fact about her pregnancy. The TLC star admitted that she revealed that her second pregnancy was discovered after three-week-long constipation. Glenn would really get a shocking reality check when he grows up. Stay tuned to TV Season & Spoilers for further updates.