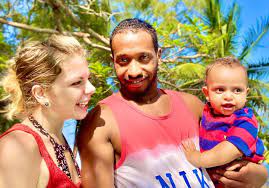 Until last season, Ariela Danielle , and her 90 Day Fiance Biniyam Shibre were one of fans’ most favorite cast members of The Other Way spin-off series. However, it seems like this fan-favorite couple is standing on the verge of separation. Another season of the popular spin-off has been renewed, and TLC has also released a trailer already. The video hints that serious troubles will soon come knocking at this pair’s door. Here’s all you need to know.

90 Day Fiance: Ariela’s Ex-Husband Comes To Live With Her In Biniyam’s House

Ariela has been one of the most-loved cast members of the TLC show. She won many hearts after she sacrificed her comfortable life in the US, to live with the love of her life in Ethiopia. After a lot of complications, the couples seemed to be living happily together. However, a problem has been stepping into their lives, which might change their love story forever. For those who don’t know, both Ariela and Biniyam were married before they got together.

Biniyam was married to another American woman, Bria, for four years. ScreenRant points that they also shared a baby, who she took with her when they separated. On the other hand, Ariela had an Argentinian husband, Leandro, but they got divorced eventually. However, years later, her ex-husband is ready to land in Addis Ababa, to stay with her at Biniyam’s house. Not a lot is known about what happens next, but Biniyam surely had a hard time meeting his fiance’s ex.

The latest trailer of the new The Other Way season features Biniyam and Leandro boxing together. The Ethiopian TV star finally beats him in the match, but it seems like things turned sour after that. Shibre even said that he wouldn’t let this man take the love of his life back to America.

90 Day Fiance: Ariela Leaves For The US With Baby Aviel!

While fans were expecting that things would get better between the couple, TLC revealed in the new trailer that might not happen. A clip shows Ariela walking into an airport with Baby Aviel as her 90 Day Fiance watches her from behind. Biniyam looked pretty upset and later called out his partner for leaving him on a video call. However, Ariela replies, “I will never go back to Ethiopia after what you’ve done to me and Avi.”

This suggests that it was Biniyam that made a mistake huge enough for his partner to leave him. ScreenRant also noted that Biniyam is facing the same thing as his previous relationship as his American ex-wife also left for the US with their baby and never returned. While the couple looks pretty happy on social media, the new episodes suggest that they could be reaching a breaking point soon. What do you think about the same? Tell us in the comments below, and stay tuned to TV Season Spoilers for more updates.