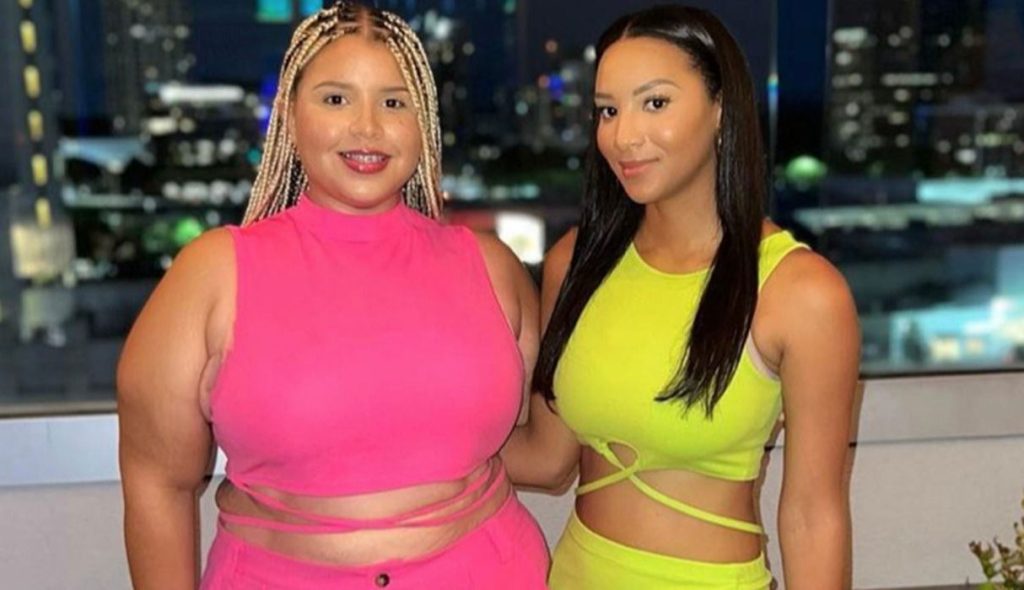 The 90 Day Fiance sister duo, Chantel and Winter Everett, are most recognized for their debut on The Family Chantel. It is a TLC spin-off show where they displayed their close family ties. Both sisters have recently moved on and divorced their respective long-term boyfriends. The stunning sisters are currently relishing their independence and spending time with one another. Winter and Chantel Everett recently dressed up for an occasion and posted their pictures on social media.

Chantel and Winter recently recounted their most recent journey while attending a press event in their finest attire. The 90 Day Fiance sisters revealed their glam makeovers in their most recent Instagram stories. They share a few behind-the-scenes videos from their big night. Chantel had straight hair and a black dress with cutouts that she accessorized with gold jewelry. Winter displayed her curves in a contrasting white off-shoulder dress with a red floral motif. Together with their brother River Knight Everett, both girls looked red carpet primed and ready in their gowns.

According to their Instagram stories, the sisters attended the press conference for the new drama science fiction series Wicked City. The show debuted on December 1, 2022, on the ALLBLK channel of AMC Networks, as per ScreenRant. Chantel shared many videos on the red carpet and displayed her press passes in her postings. She was captured on tape at the occasion posing at the front of the banner for the TV program in one video. In a different video, Winter displayed her toned body while posing for pictures on the red carpet.

Winter and Chantel seem to had a good time at the AMC show’s press conference. But they kept their visit’s purpose a secret. Moreover, the red carpet stroll demonstrates that someone must have extended an invitation to them to the evening event due to their notoriety. The stars of 90 Day Fiance are incredibly well-known among lovers of reality television and have a large online following. Chantel and Winter’s attendance at the press conference would attract potential viewers to the show.

90 Day Fiance: Chantel Everett Opens Up About Her Nose Job

After years of rumors, Chantel Everett has officially admitted whether or not she had a nose operation. Chantel and her partner Pedro Jimeno made their debut appearance in Season 4 of 90 Day Fiance. They showed potential as a happily married couple who had been together for six long years. However, the breakdown of their marriage was first depicted in the latest season of The Family Chantel. Since then, Chantel has concentrated on her new position and unveiled a new appearance. Leaving fans to speculate as to whether she will next appear in The Single Life spinoff. Not only is Chantel getting support from her cast and family, but also from those who formerly made fun of her after Pedro announced their divorce.

While Chantel was still Mrs. Jimeno, rumors about her plastic surgery transformation were constantly circulating. Fans have asserted that Chantel’s nose has gotten smaller and leaner over the years, despite her continued denials that she had cosmetic surgery performed on her body and her face. Chantel used to constantly say “makeup” when asked if she had Botox on her lips or a rhinoplasty done in the past. Not much has changed in 2022, but Chantel has disclosed the cosmetics that quickly make her nose smaller. Chantel accepted in a video of a cosmetic professional shaping her face and claimed that this was the nose job she had been doing over the years.

Chantel dispelled rumors that she might be undergoing breast implants in November 2020. She said in the caption of an old photo from her teens that she had always had a larger chest before growing up. Chantel, whose appearance on 90 Day Fiance fueled speculation about breast surgery, was forced to post a photo of herself from 2009 next to a shot from 2019. The 90 Day Fiance star said that while she enjoys working out and applying cosmetics, she hasn’t had any jobs done. Nevertheless, she believes one should be confident to do what makes one feel attractive. Stay tuned to TV Season & Spoilers for more updates.