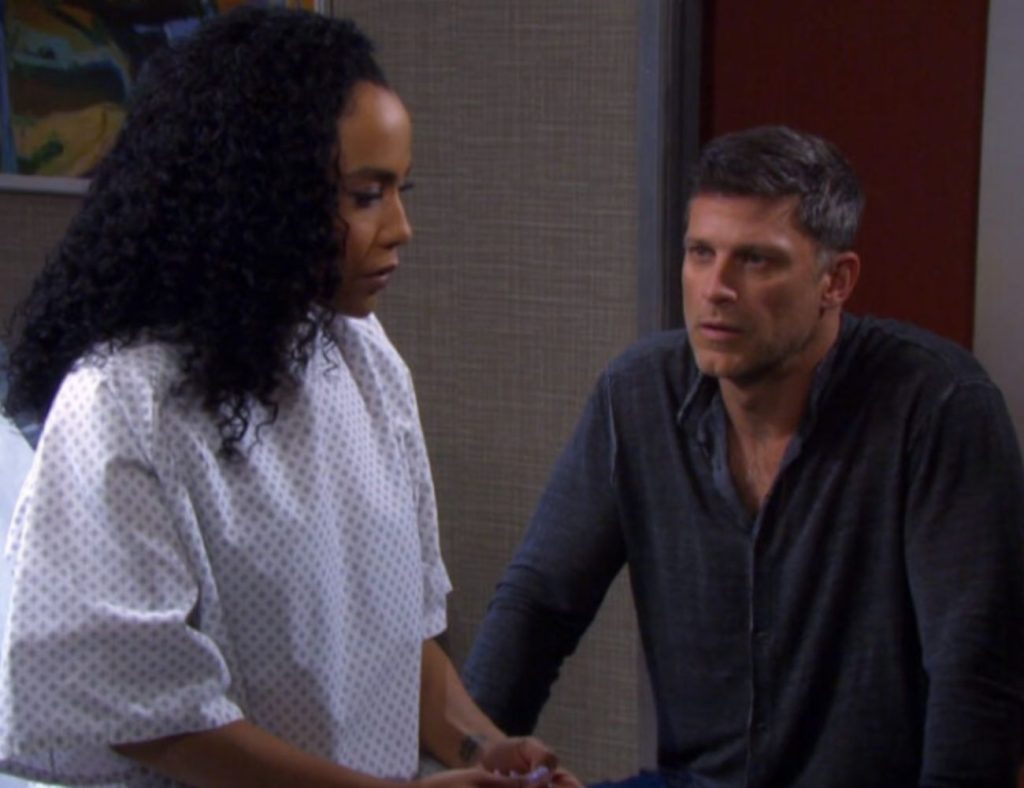 Days of Our Lives: Jada’s False Pregnancy Test! NO BABY For Eric

The soap universe is drowning in baby drama tracks these days. And Days of Our Lives isn’t one to be left behind! Viewers recently saw Jada being rushed to the hospital, and speculations soon started to take shape that she is soon going to find out she was pregnant. It is starting to look like the speculations will hit the bull’s eye, will it last? Is Jada really pregnant? And, if she is, then will she successfully carry the baby to term? Let’s find out what can go down in Salem next!

Recently, on Days of Our Lives, Jada was rushed to the hospital after she felt ill. Upon check-up, it was found that she is indeed pregnant. However, the positive pregnancy report shocked Jada. She has a hard time comprehending and accepting the fact that she really could be pregnant. Understandably so, as she had been diligently taking precautions to avoid pregnancy while getting pregnant with her partner, Eric.

When she confided in Sarah about this, she offered to run the tests again. While Jada did bring up the fact that tests could be showing a false positive, she declined the offer of a retest. Is Jada happy about the pregnancy in the hearts of her heart? And perhaps, just struggling to accept it? Well, at least we know Eric would be very happy being a dad! He still fawns so much over Nicole’s daughter on Days of Our Lives. Of course, he would love to have a baby of his own. And Jada might just be beginning to warm up to the idea deep inside. But will this happiness last? Will there really be a baby for Jada and Eric?

The accuracy of tests and lab results is arguably low on Days of Our Lives! We have seen too many mess-ups to know that much. Are we about to witness yet another one? There have been too many hints and speculations regarding the pregnancy not coming through. So there is a major possibility that the test was a false positive. And once Jada and Eric warm up to the idea of being parents together, a scheduled ultrasound would reveal that there never was a baby, to begin with. That would surely sting the couple a great deal.

In a more morbid possibility on the Days of Our Lives, Jada might really be pregnant. However, only to lose it later. We have seen this happen way too many times with too many characters to reject it from happening again. If the story chooses to go this way, it will be all the more traumatizing for Eric and Jada. Although, it would open paths for a few other possibilities. The tragedy might bring the two of them closer than ever, and their relationship might take a more permanent turn.

Or on the flip side, the trauma might cause too much pain between them and lead one of them astray and into another person’s arms. We did just see sparks reigniting between Eric and Nicole! However, there aren’t any solid leads pointing to which way the story is headed from here. We will get back to you with further updates as soon as there are any! Meanwhile, stay tuned to the upcoming episodes of Days of Our Lives to find out more! Now streaming exclusively on Peacock.