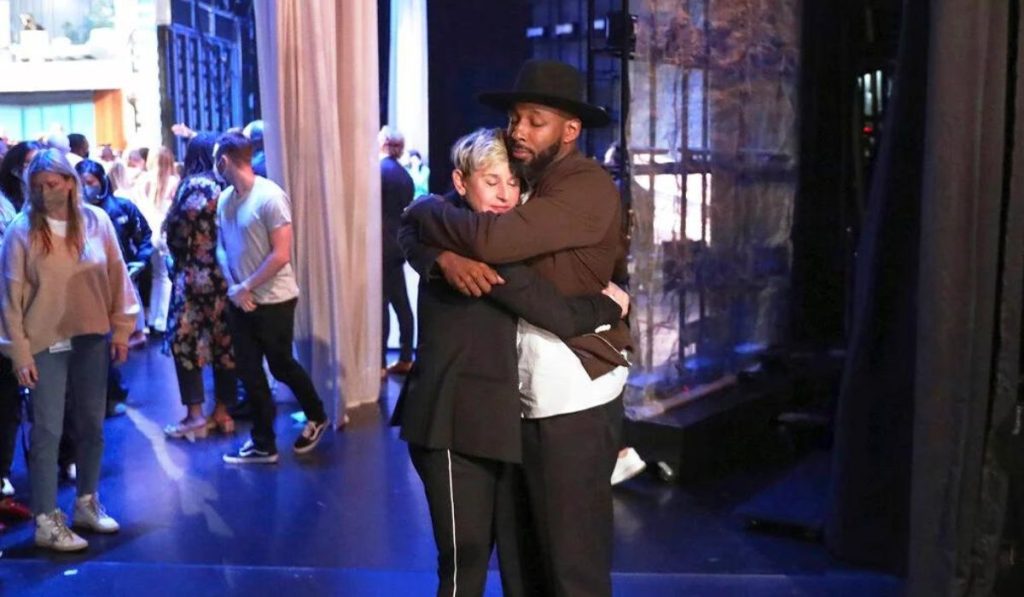 DWTS: Ellen DeGeneres Cries Her Heart Out Over The Death Of Stephen “Twitch” Boss!

One day everyone has to go leaving their loved ones behind. Sadly, the “So You Think You Can Dance” star, Stephen “tWitch” Boss, left this world way too soon. On December 13, Stephen took his life, leaving fans and family in shock. Everyone loved him and also enjoyed the romantic chemistry that DWTS star Allison and Boss shared. Since his death, a lot of his close ones and people from the industry have been posting memories of him. However, fans were shocked when Stephen’s friend and the Ellen DeGeneres Show host recently posted a tribute to her late friend. In the post, Ellen cried her heart out, remembering him.

Stephen “tWitch” Boss, was known for being a part of So You Think You Can Dance. However, he also left an impression on a lot of us while appearing as a DJ for “The Ellen DeGeneres Show”. Tragically, DWTS star Allison Holker’s husband, Boss, committed suicide on December 13. Since then, DeGeneres has posted daily memorials in honor of her deceased buddy on Instagram. However, she released a new video clip for her friends and admirers on December 23, discussing how difficult life had been without Boss. In an emotional video, the talk show presenter admits that she isn’t doing well and that this is all extremely difficult. Still, she urged everyone who knew tWitch or was simply a fan of his to do something to commemorate his memory.

Ellen urged her followers to continue laughing and having a good time with one another in memory of the late dancer since it is what he liked to do. Millions of tWitch users must have related to this clip since Ellen closes by urging everyone to “spread love to one another”. Ellen has been posting photos of Stephen since the day he passed. DeGeneres’ well-known friends and admirers are supporting her and posting memories of tWitch. Comedian Loni Love said Ellen has helped Boss to circulate his message of joy and happiness among his fans and followers.

DWTS: Allison Holkar Speaks Up About Her Husband’s Death

In a statement made exclusively to People, Stephen “tWitch” Boss’ wife, Allison Holker Boss, addressed the news of his passing. She mentioned that he was the backbone of her family, the finest husband and father. The TV star added that tWitch was also an inspiration to his admirers. On Instagram, the DWTS star posted a photo of herself and Stephen. Boss was her “one and only,” she said. Additionally, Holker said, “We really miss you”. The couple’s ninth wedding anniversary was on December 10. In fact, Boss posted an Instagram photo of them dancing with the comment, “Happy anniversary, my love”. A video montage of images from the wedding was posted on Instagram by DWTS personality Holker with the caption “Verified,” in contrast.

The DWTS contestant Holker and the Ellen DeGeneres personality, Stephan Boss, wed on December 10, 2013. In episode seven of “So You Think You Can Dance,” they first met. They have three children: Weslie, who Boss adopted from Holker’s previous relationship, Maddox, and Zaia. Sadly, it was reported and confirmed by three days following Boss’s passing that the artist had left a statement at the site. According to information provided to news organizations by law enforcement officials, the suicide letter made reference to his earlier difficulty with refraining from going into specifics. The only other occasion Holker addressed Boss’ death was in an Instagram post she made on December 21. She had only ever spoken to people before then. For all the latest updates, keep coming back to TV Season & Spoilers