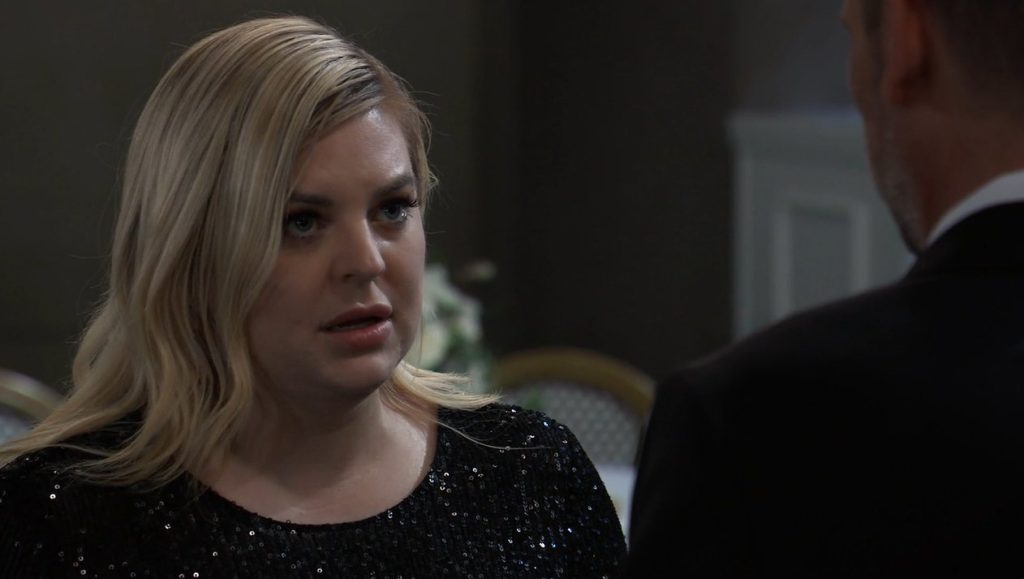 General Hospital spoilers reveal that new dangers are coming up for Maxie in the upcoming days. With the Louise kidnap struggle taking new turns, viewers will be on the edge of their seats. They know that Peter has kidnapped Louise. And now, he is planning to vanish into thin air with the baby. The speculation is that Maxie might give in to some demand of Peter’s and herself go with Peter. What would happen next? Keep reading to find out.

General Hospital: Peter Has Figured Out The Truth

For starters, GH viewers know that Peter escaped police custody. While on his way from the hospital to Pentonville, Peter escaped with Victor’s help. While everyone had hoped he’d actually end up in jail, we knew that isn’t how things work on the soap. Things were bound to go down the spiral and they did.

Now that Peter has escaped and he knows that Louise is his daughter. He is extremely mad at Maxie for taking away the baby. So, he kidnaps Louise. Peter won’t let anyone take her daughter, and he wants to start a new life with Louise.

Maxie Gets The Update

Further spoilers suggest that since Peter has kidnapped Maxie’s baby, she is devastated. General Hospital spoilers for February 7, 2022, reveal that Chase and Brook figure that the time when Peter escaped and baby Bailey aka Louise, went missing was the same. So, it definitely means that Peter kidnapped the baby.

Obviously, long-time viewers know that if Maxie loves some humans more than anything, they are her children. Now that her daughter has been kidnapped by a psychopath, she will be scared and devastated. So, she might have to come up with a plan to save the baby.

General Hospital: Maxie Wants To Save The Baby

Viewers who have been keeping up with the show know that Maxie would do anything to protect her daughter from Peter. Maxie might get into a very difficult position as Peter has Louise. General Hospital spoilers for February 8, 2022, reveal that Peter is all set to take Louise away forever. And he will do whatever it takes to be with his daughter. So, Maxie will find herself at odds and might make the best she can under the given situation.

General Hospital spoilers suggest that Maxie will soon find herself at the crossroads. Either she will have to let Louise go with Peter, or she might have to convince Peter somehow. It is likely that before Peter goes, Maxie might ask him to meet her once. Maxie knows all of Peter’s soft spots. And hence, she might use them to get into his head.

She might then try and convince Peter that they can finally have the family they first dreamt of. It might be hard for Peter to believe her as she has once before tried to take Louise away from him. But, Peter has a soft spot for Maxie, so he might also give in.

Letting Louise go with Peter isn’t something that Maxie will want to do. So, she might find soon find herself in a situation where she will have to make a huge sacrifice. It is likely that if Maxie succeeds in making Peter that she wants a family with him, Peter might suggest that she goes with him and Louise.

Since Maxie knows that Peter is a huge threat and leaving the baby alone with him is not something that she can afford, she might decide that she too needs to go with Peter. General Hospital spoilers for the week of February 14, 2022, reveal that Maxie will have to make a tough choice. So, that could mean she doing something like sacrificing herself.

Further General Hospital spoilers for the week of February 14-18, 2022, indicate that Austin and Liesl will work on a plan to reunite Louise with her mother. But the spoilers do not mention anything about Maxie’s involvement. So, that makes us think about where Maxie could be. Is it possible that Peter might be holding Maxie hostage and nobody knows just yet? That is a huge possibility.

We can imagine how tough it would be for Maxie. What will be Maxie’s next plan? We’ll have to wait and watch. General Hospital airs on ABC all weekdays. So, make sure you tune in and enjoy. TV Season & Spoilers will keep you updated with all the news about the soap. Keep an eye on this space.