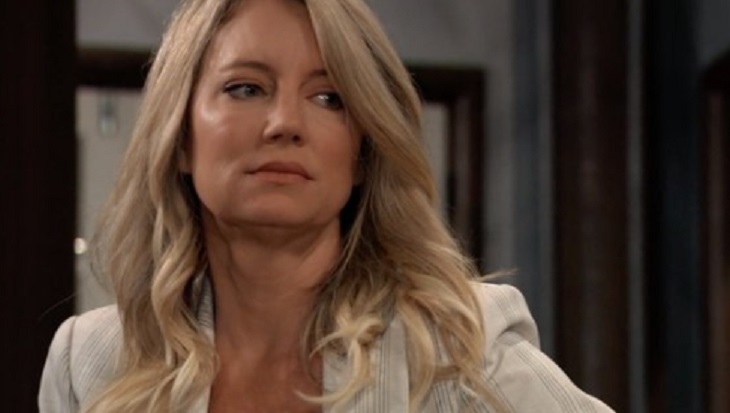 The latest General Hospital spoilers reveal that Maxie has told Nina the truth, and now Nina will have to decide whether she will hide the truth from Valentin or tell him the truth. Nina knows that Valentin has started loving “Bailey,” thinking that she is his daughter. However, that isn’t true. So, would Nina tell Valentin the truth to save him the heartbreak? Here is everything to know about it-

General Hospital viewers know that Maxie is having a hard time dealing with the fact that she had to give her daughter to Brook Lynn. While Maxie did it to save Louise, she is finding it very hard to stay away from her. Recently, Maxie and Brook met where Maxie told Brook all of this. So Brook gave Maxie a solution. She suggested that Maxie could just come clean and take her baby home. However, Maxie chose not to do that. She wants to keep the baby safe from her psycho-ex Peter. What Maxie does not know is, Peter is dead.

So, Maxie came up with another solution. General Hospital spoilers suggest that Maxie will decide to leave the town in order to cut out the temptation. However, she will need some advice. So, she will reach out to Nina, who recently relocated. Nina moved to Nixon Falls, where she found happiness. So, Maxie might want to move too.

General Hospital spoilers say that Maxie will want to leave the town. So, she will speak to Nina. When she talks to her, Maxie might let the truth about “Bailey” being baby Louise out. While Nina will understand why Maxie did what she did, she will have to promise Maxie that she wouldn’t tell this to a soul. The question is, will Nina be able to keep this truth from Valentin?

Will Nina Tell Valentin The Truth?

While Nina might have promised Maxie to keep the truth hidden, she will wonder how hiding it will affect Valentin. He believes that Bailey is his daughter and has started loving her with everything he has. So, Nina might feel that she might just be setting Valentin up for a major heartbreak if she hides the truth. After all Nina and Valentin have come on good terms after almost two years.

Viewers would recall that back in the time, Valentin had hired an impersonator- Sasha Gilmore to act like she was Nina’s daughter. Valentin had promised Nina that he would find her daughter, but he decided to do this when he failed to find Nina’s daughter. But when the truth came out, Nina was furious. She couldn’t believe that Valentin could do something like this. While it has taken some time for her to ease the anger, they have finally reached a safe place.

So, Nina might feel that the roles are reversed now, and she wouldn’t want to hurt Valentin. Will she tell Valentin the truth? It is possible. She would think that this might be a good way to deal with the whole thing. She might even tell him the truth and make him promise that he wouldn’t tell anyone else the truth.