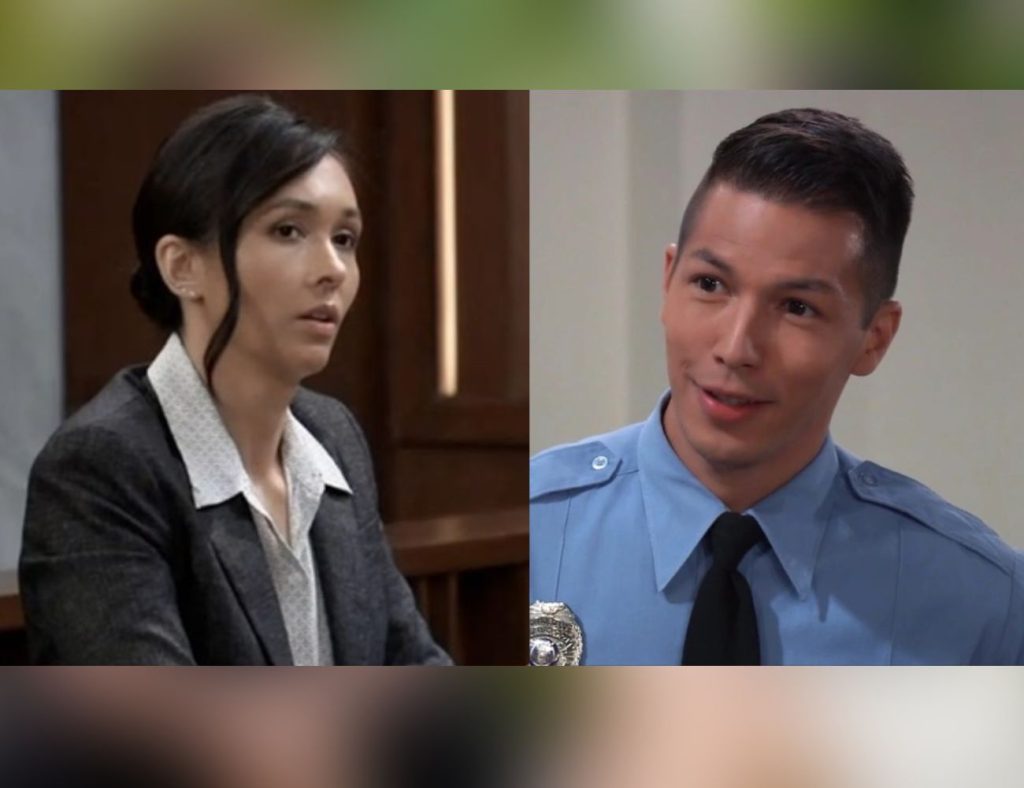 Taking a stroll down memory lane today on General Hospital, we recalled something that sits in perfectly with a potential twist in Rory and Trina’s story. Fans would remember from the beginning of Trina’s trial, ADA Arden had a bone to pick with her. The Assistant District Attorney was hell-bent on punishing Trina so as to set an example. The latest spoilers and rumors suggest that rookie cop Rory Cabrera could be in cahoots with ADA Arden! So, was the whole love-boy act just a ploy to trap Trina? Let’s find out!

Ever since Rory Cabrera entered General Hospital as a rookie cop, he had his eyes on Trina. While it made sense that so many people were on her side, trying to prove her innocence. They all have known her for years. Rory, however, barely knew Trina yet seemed to be convinced of her innocence. In fact, he was willing to do whatever it took to help her and protect her. It was all just too unicorn and rainbows for a soap like General Hospital.

Obviously, from the word go, fans were having trouble accepting that Rory was such a goody two shoes. Many speculations were made about the cutie cop. Some even thought that he could even be the Hook Killer and Trina, his next target. However, it later started to seem too outlandish for Rory to be it. The latest spoilers suggest that Rory, after all, could have a much darker side than he shows. Rumor has it that he was planted in Trina’s life by Assistant District Attorney Jennifer Arden. Rory was supposed to get closer to Trina to find loopholes in her story and fish for evidence to incriminate her in the case. However, the ploy failed and Trina was evicted. So what next?

Spencer Returns For A Hero Moment

While Rory may have failed in implicating Trina in the case of General Hospital, it has not stopped him from pursuing her. That really makes us wonder why he is still latching on to Trina if his mission failed. Trina is acquitted, the case is closed, game over! Shouldn’t he leave? Maybe, just maybe, Rory may have developed a fondness for Trina over time and wants to stick around to see where it goes, after all. However, it is evident that Trina still has complicated feelings for Spencer. She isn’t really over him.

We know it’s time for Spencer to return home from Pentonville to General Hospital. He wouldn’t be happy about seeing Rory and Trina together. Just like Trina, he, too, has lingering feelings for her. Call it jealousy or lover’s instinct, Spencer will have a feeling that Rory isn’t all that he seems. He will go on a truth hunt to figure out Rory’s back story or any hidden agendas he might have. After all, This is General Hospital we are talking about! There has to be some dirt on everyone, right? So, eventually, Spencer will unearth the connection

between Rory and ADA Arden and his original agenda.

Spencer will expose Rory in front of Trina. However, Rory might try to justify that while his initial motives were different, it’s not the case anymore, and his feeling are genuine. But that may go nowhere as this revelation would be enough excuse for Trina to run back into Spencer’s waiting arms. Thus, Spencer will have his hero moment and will win his girl right back. So, stay tuned to ABC over weekdays to see how it all plays out on General Hospital.