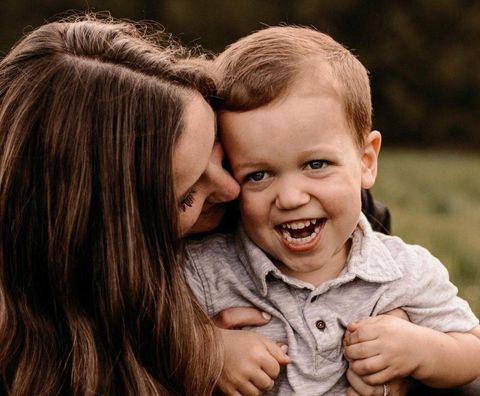 Little People Big World: Jackson Roloff Is Out of Control In His New Washington Home! Tori Gets Frustrated

Only a while ago, Zach and Tori Roloff from Little People Big World had announced a massive piece of news. The family officially moved out from Oregon to Washington state. However, it looks like their little son Jackson is having a great time in their new residence. His mom has been using her Instagram handle to share all the shenanigans the little munchkin has been up to ever since they moved. Keep reading to find out more!

The new Roloff house is much more spacious than their residence in Oregon. Mom Tori Roloff has been sharing a lot of glimpses of it through her social media. She captured her young son running around the house in a new Instagram story, full of excitement. He was having a bit of fun before watching a football game. Besides, a lot of packing boxes were visible in the story as the family had just moved. After seeing the exterior of the new Washington house, fans are eager to get a glimpse of the interiors. Moreover, they are hopeful that the young mom won’t hesitate to give them a virtual tour when the time comes.

The Roloffs also celebrated Halloween in their new home. Jackson, as well as his little sister Lilah, looked highly adorable in their costumes. The former donned Spiderman clothes while the latter dressed up as Minnie Mouse. Their mom didn’t hesitate to share wholesome pictures of them through her Instagram. She is known to be a photographer and carried out a great photo shoot of the two. They were posing outside the new house amidst lush greenery. Needless to say, followers send lots of blessings and showered love on the post. It has over 100k likes so far.

The beloved reality TV family moved in the middle of October. They posted about this significant change in their lives through their Instagram. Tori shared many pictures of herself, her husband Zach, and two kids, Lilah and Jackson, posing in front of their new Washington house. In her post, she talked about how the shifting process took her an entire month! Also, the star hilariously wished never to move again. Things also took an emotional turn when she mentioned their old Oregon home and her family’s memories in it. Although her family will deeply cherish those moments, a new adventure was long overdue. Hence, they are looking forward to their time in the new house.

Because of this announcement, there was a lot of speculation about the four Roloffs quitting the show. Before this, other Roloff siblings like Jeremy, Molly, and Jacob left the show in the mid-2010s. However, the mother-of-two made it clear through her Instagram comments that the family will continue to feature in Little People Big World. In fact, the filming for the latest season, i.e., Season 23, has already begun.