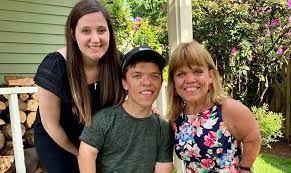 A lot has been going in the lives of our favorite TLC cast members, and Little People Big World Season 22 is here to share them with us. The new season released recently and featured the Roloff family looking forward to Amy’s second marriage. It’s been a while since the LPBW matriarch has confirmed that she’s marrying her new love interest, Chris Marek. Well, the couple has been hanging out with Amy’s ex-husband and Roloff dad Matt, and his girlfriend. In fact, Matt and Chris seem to be building some sort of a friendship these days.

As expected, Amy isn’t quite comfortable with her new husband and her ex-husband becoming friends. She’s been very cranky in things related to Matt in the new season, even though she’s pretty happy with Chris. Hence, when Matt offered the soon-to-be-married couple to hold their wedding at the farm, Amy wasn’t very comfortable with it. Fans have been calling her out for being way too negative and rude towards her ex these days. However, apparently, she isn’t the only one that disapproved of this idea. Here’s everything you need to know about it.

Even though Matt and Amy are hanging out with each other after their divorce, things have been pretty awkward. On social media and on the latest season, the former Roloff couple has been spending time with each other again. However, this time, it is alongside their new love interests. While Amy is getting married to real estate agent Chris Marek, Matt has been dating ex-manager of his farm, Caryn Chandler. They recently gathered up together the day before Amy and Chris’s housewarming party. This was when the Little World Big World patriarch offered the couple to marry at the farm.

While it was clear that Amy was uncomfortable to even imagine that, her fiance didn’t seem to be that bothered by it. In fact, he almost agreed to it. However, later on, when Amy discusses the topic with her son and daughter-in-law, she didn’t seem to be the only one who doesn’t want that to happen. TVshowsace points out that there was an awkward silence when their mom revealed Matt’s offer to Zach and Tori Roloff. Moreover, Zach and Tori were waiting to see how Amy feels about the offer. Once that happens, they would put forward their own decision.

Little People Big World: Are Chris & Amy Not Getting Married On The Farm?

Well, it clear Amy wouldn’t agree to start her new life with her new love interest on the farm where she spent years with her ex-husband. In fact, it looks like she wouldn’t ever agree if not pushed to do it. On the other hand, Chris is super interested in the offer. In fact, he even tries to convince his bride-to-be. He points out that there are many advantages of getting married on the farm. This is mainly because it’s hard to look for venues during the pandemic as everything is closed. Besides, they won’t be able to decide on a date until they get a venue. Hence, they won’t have to worry about a date if they do it at the farm.

These episodes were probably filmed a few months ago. Moreover, Amy recently confirmed on social media that her wedding is in August 2021. This means that big day was more than half a year away from the time Matt offered the farm for the event. Besides, the virus outbreak situation has been improved where the Roloffs live. They were also seen going on vacations, which means a lot of places are now open. Hence, Amy and Chris do not have to worry about not getting a different venue anymore. Therefore, there is a chance that they might not get married at the Roloff farms anymore. Well, we will only get to know if that actually happens in the next episodes of Little People Big World.

What do you think? Should Amy actually get married at the farm? Tell us in the comments below and for further updates, keep in contact with TV Season Spoilers.