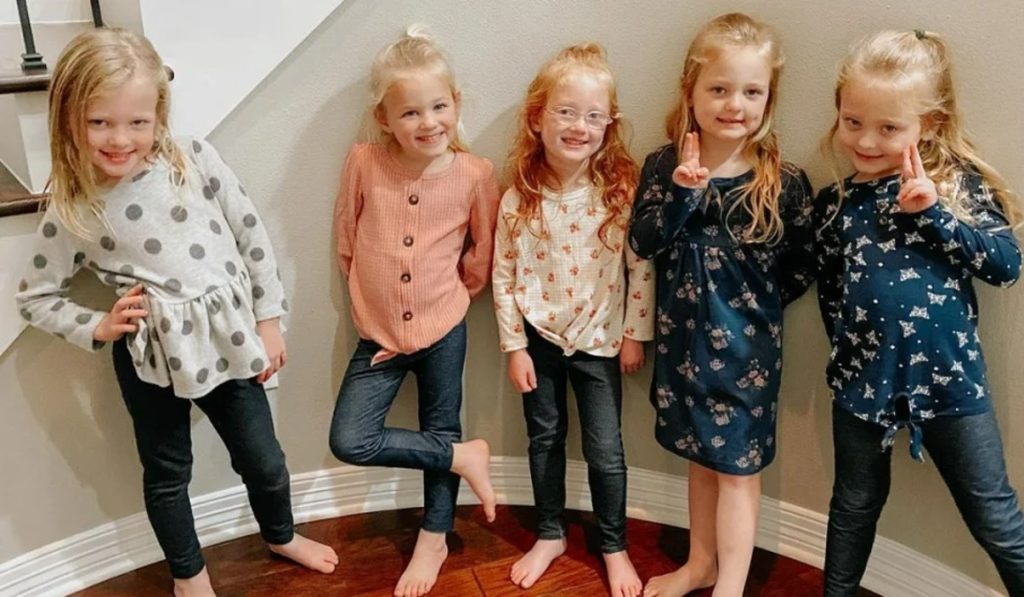 OutDaughtered: Busby Quints Are Getting Mischievous! Sneak In A “Freeloader”

The iconic Busby quintuplets are the kids of TLC stars Adam and Danielle Busby. When mother Danielle Busby gave birth to the first set of all-female quintuplets in the United States several years ago, her family received widespread media attention. Since then, she and her husband, Adam, have earned recognition, as have their eldest daughter and a set of quints. The eight-member family is the subject of the well-liked TLC series OutDaughtered, which provides an intimate peek at their busy life. However, currently, the Busby family is on break and has stopped filming. But they update their fans through Instagram. Although, recently, the quints were caught smuggling some freeloaders. It seems something is serious. Let’s find out.

A “freeloader” was discovered smuggled inside by the Busby quints of TLC’s OutDaughtered. Their father, Adam Busby, used social media to update followers on the issue and explain what happened. You may know the quints’ constant mischief from the series or through their parents’ Instagram accounts. The Busby home is the scene of plenty of mischiefs because the five little daughters are all the same age. Thanks to social media, followers can see what they are planning and enjoy their outlandish ideas. As per tvshowsace, Adam recently discovered the quints attempting to sneak in a “freeloader”. What exactly were the girls doing?

This week, Adam posted a new video to his Instagram Stories as he headed outside to pick up the daughters for school. They underwent their final half-day of school on Friday before the holiday break. Moreover, Gus, their family dog, was sitting in his usual location as Adam opened the door to climb into the driver’s seat. For those who don’t know, Gus is a Bichon Frise/Shih Tzu mix. On the other hand, the French bulldog, Beaux, is their second pet. You can hear the girls laughing in the background of the clip once Adam realizes Gus is in the front seat. As the OutDaughtered dad started speaking, the cute white puppy began to wag his tail.

“We got a freeloader,” remarked the father of six children in his latest Instagram story. He believed that the Busby mom would be driving. It appears that Adam does not enjoy traveling with Gus as much as Danielle does. She spoke in a baby voice, complimenting Gus on his cleanliness and cuteness. Moreover, the young mom looked out the passenger-side window to bid Adam goodbye as the dog hopped across to the seat in front of her. Gus was able to accompany them. Therefore, it appears that the OutDaughtered quints’ strategy was successful. After Adam dropped the quints off at school, the dog sitting in the passenger seat can be seen.

However, Adam also added the video clip of their bedroom getting painted. Lately, Danielle shared a video about Adam and her sleeping on separate beds. It is due to the renovations being made to their bedroom. They held a Christmas party the day before yesterday. Their bedroom did, however, get a touch soiled during the celebration. And so dad, Adam Busby, made the decision to paint it. As a result, the pair is using separate beds. Danielle updated her fans on the situation by posting images and videos. She first posted a picture of her room being painted. “Bedroom transformation started today,” the caption reads. She then uploaded a video where she explains why they were using separate beds in the next story. For all the latest OutDaughtered updates, keep coming back to the TV Season & Spoilers