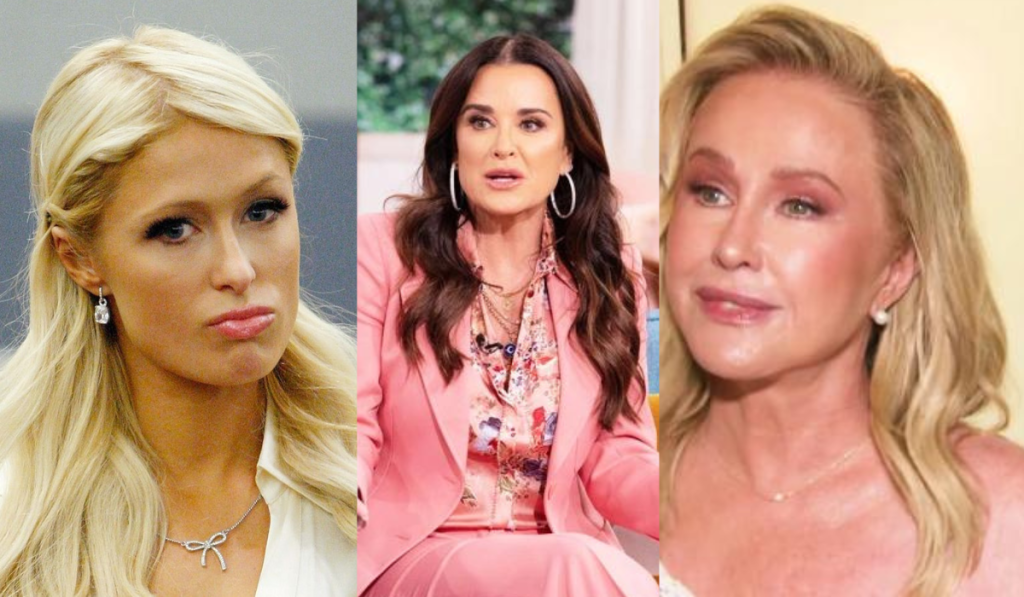 Kathy Hilton and Kyle Richards have always been at the cold war. The sisters rarely get along, and during the RHOBH, they have butted heads before. Besides, Kathy and her daughter Paris have made appearances on the reality show and been at the fame. A recent interaction between Kathy and the Real Housewives cast members didn’t go as planned. Though the scene was comical, the Bravo fans thought the co-stars were trying to get to Hilton. Besides, Paris Hilton seemed to agree with the fan’s tweets. Tune in to find out more.

Kathy Hilton joined the reality drama series in Season 11 as a “friend of” the housewives. The reality star became popular and quite likely found herself in the drama. Hilton’s appearances are often relieving and comical. However, the eleventh season saw the raw fight between Kathy and Kyle. Likewise, Hilton made fun of Dorit Kemsley’s charity’s name, “Homeless Not Toothless.” Then, the reality star clashed with her sister Kyle on the Aspen trip. During a recent episode, Kathy wanted the cast members to show her new tequila line. However, her co-stars shut her down, and the fans saw it as “unkind.” Meanwhile, the RHOBH audience has been watching Kyle Richard’s erratic drama in the current season.

Moreover, in this particular episode, the Real Housewives Of Beverly Hills did the same. Kathy was excited to show her tequila family line that her family invested in. But, the Bravo stars didn’t take part in it. The scene seemed comical at first. Hilton wanted an overview of the ladies and a little bottoms-up. Strangely, Kyle Richards scoffed loudly, and the group laughed erratically. Erika Jayne said she cussed Garcelle’s son

the last time she did tequila. Hence, Jayne refused to try the drink. On the contrary, the scene was supposed to be taken as light humor. But, the fans aren’t happy with the ladies overshadowing co-stars on the show. A fan noted that the RHOBH cast is evil and ugly. Paris Hilton agreed with the audience as she liked multiple tweets of people slamming Richards and the others.

Paris Hilton has shown her emotions as she liked tweets that spoke about the spectacle of the cast members. The celebrity agreed with a tweet saying everyone is always promoting their business and investments on the show. Hence, the RHOBH cast members should be supportive, and Kathy Hilton deserves respect. Hilton’s daughter liked another post about firing Kyle Richards, Erika Jayne, and Lisa Rinna out of the show. Likewise, Paris Hilton replied to a tweet and said, “so unkind.” Interestingly, Denise Richards replied to Paris, saying, “I felt bad for her. You could see her feelings were genuinely hurt.”

Denise Richards also slammed Lisa Rinna as she said, “the preview with Rinna going out of her way to take a dig.” Meanwhile, the tequila-tasting drama isn’t over yet. The preview clip shows that Kyle and Kathy will get in a big fight, and Lisa Rinna orders a glass of Kendal Jenner’s 818 Tequila instead of Casa Del Sol, the UsWeekly reports. Stay tuned to TV Season & Spoilers for the latest updates on RHOBH.