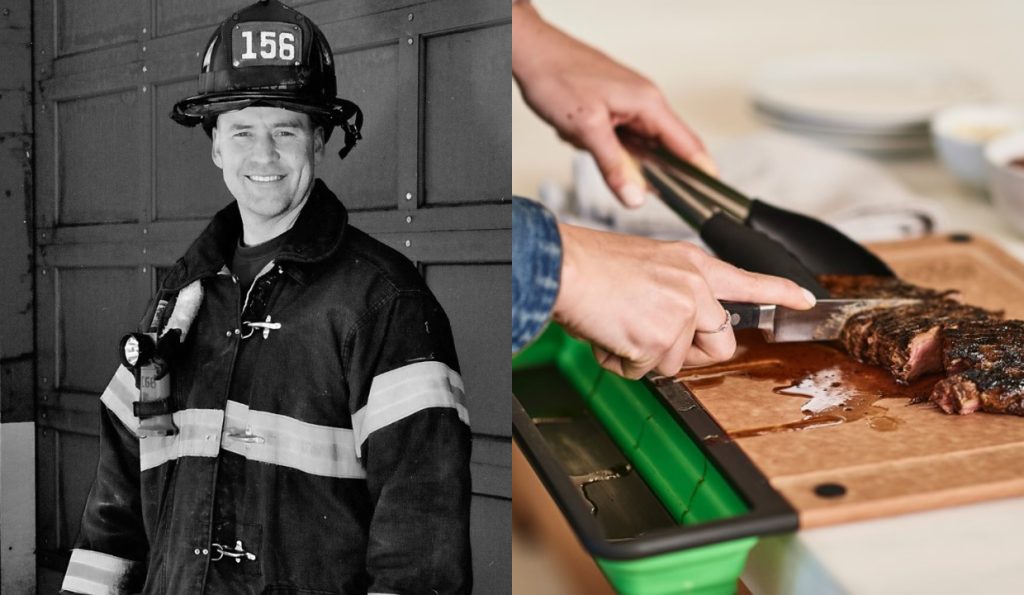 KEITH YOUNG WITH HIS INVENTION CUP BOARD PRO
News

Shark Tank: Cup Board Pro Owner Finally Got Success After His Death

Cup Board Pro was not just an ordinary invention, and the creator of it came on Shark Tank with an emotional back story. Keith Young, a former New York City firefighter, was the inventor of this masterpiece. Alas, he is no more in this world, but he is surely among the people who brought his helpful product into the limelight. The celeb made something that made his life easy, so he wanted others to get benefit from it as well. In fact, Keith’s kids led their father’s legacy to make the world aware of this wooden board and its uses. The product even reached the popular reality show how and made all the sharks emotional with the cause of its invention. Keep reading to know more about this.

Shark Tank: Widower Dad Succeeds After His Death Through The Show

Keith Young was a former firefighter and a single dad of three kids. Moreover, his struggles have made him successful today. He used to cook for his family, which led him to make a product for his convenience. Later on, before pitching his idea on Shark Tank, he passed. Keith was in the cleaning dept after the 9/11 attack. He had to fight cancer after such exposure. Unfortunately, he passed away before launching his product. His inspiring story made all the sharks emotional, and they decided to contribute. Even Young’s wife died of breast cancer. Therefore, he was left in charge of all household duties and his job. Young invented a cutting board to ease him in all the kitchen chores. It has a mechanism that slides unwanted liquids onto a detachable plastic, so there is no mess on his kitchen desk. Thus, it made his life easier.

The board also allows some room for waste food, so there is enough space on the kitchen counter. Keith had thought of pitching his idea to the Sharks, but fate had something else in mind. Three months before his pitch, the inventor passed away due to cancer, related to his 9/11 involvement. Therefore, his three kids, Kiera, Christian, and Kaley, pitched their father’s idea in the show Shark Tank. For the first time in a long time, all five Sharks decided not to profit from their contributions to the product. They were so impressed by their strength and believed in their father’s invention. Therefore, they did not hesitate to make their father’s dream come true. In exchange for a 20% ownership of the company, the proud children received a $100,000 investment split evenly among all five Sharks.

Shark Tank: What Happened After The Success Of Cup Board Pro?

Keith Young developed several prototypes before getting his first shipment of finished cutting boards in 2015. However, he was soon diagnosed with cancer due to his work at Ground Zero on 9/11. His children, Kaley, Christian, and Keira, brought the invention to Shark Tank Season 10 to accomplish their father’s dream. The Cup Board Pro inventor, Keith Young’s children, struck a deal with each of them. According to the Youngs, the sale of the board in their inventory took a leap within an hour of the show airing, and they nearly received more than 10,000 emails for the product.

The Shark Tank fans loved the product, but one issue came into the limelight after its success. The Youngs siblings got so many emails regarding the safety of the firefighters after finding out about Keith’s passing. So, the youngsters formed a trust GoFundMe and raised $41,119 for its awareness. It was way more than expected. There was a small ceremony for the new york fire department, and then the daughter of the inventor of Cup Board Pro said father would be so proud at this moment. This is what he wanted for all the firefighter’s kids and them. Keep coming back to TV Season & Spoilers for all the latest reality TV updates.