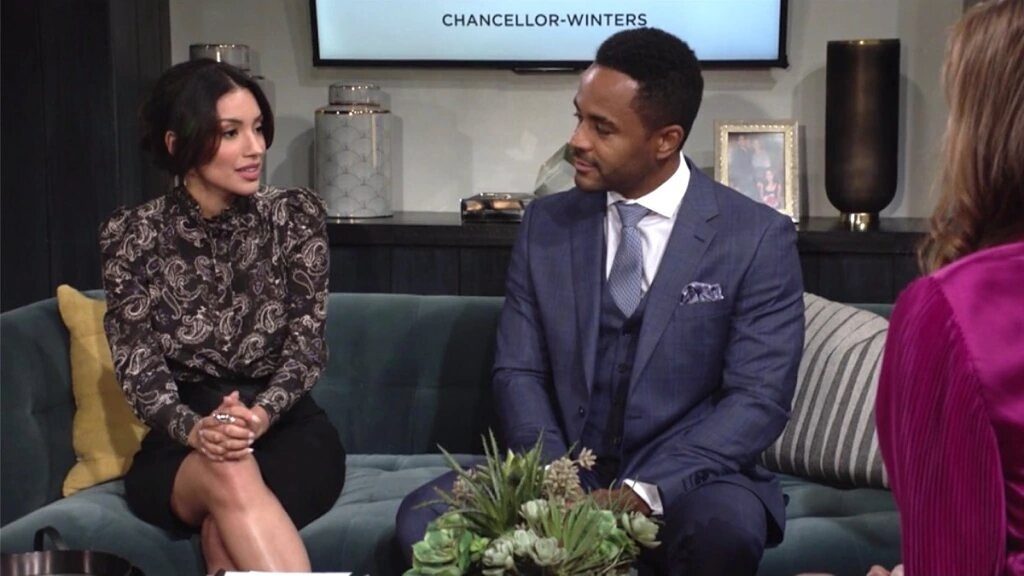 The Young And The Restless: Passion ERUPTS Between Nate And Audra

The Young And The Restless spoilers tease that Nate and Audra can come dangerously close to each other in the coming episodes. Audra might try to impress Nate by making him feel way better than Devon. Nate will also be flirty with Audra. Will this escalate to something more? Will Nate cheat on Elena with Audra? Let’s read further and discuss how Audra is going to move the coin and come a step further toward her goal of being the next CEO of Newman Media.

Audra Flirts With Nate, What Are Her Intentions?

People know how Elena was suspicious of Audra’s intention when she saw her in Newman Media. The Young And The Restless showed how Audra flirted with Nate not just in once but many times. Given how she was exposed in Chancellor-Winters, it is pretty sure that she hasn’t joined Newman Media with good intentions. Back with Elena, she feels like Audra wants some business profits and is using Nate for that. Fans know that Elena is indeed right this time!

Audra certainly is eyeing the CEO position and is using Nate in the whole process since he is the current CEO. The recent spoilers point that Audra will do some brainstorming with Nate and will make him feel like he is way better than Devon. Audra won’t stop there and will make another initiative to impress Nate. Looks like she will organize a meeting with one of her contacts who apparently will be there in Milwaukee for only one night.

In the meantime, Elena will also celebrate her life-saving hospital accomplishment. While she’ll be waiting for Nate to join her, he will prefer to join Audra for the important meeting. If Audra gets to know that he bailed on his girlfriend, she will definitely take it as a hint to make a move on him. She is already a bit flirty with Nate, what will she plan to do now? Let’s discuss what happens next.

The Young And The Restless Spoilers: Audra’s Desperation For CEO Post, Ends Up Hitting Sheets With Nate

Nate and Audra are already a bit flirty with each other. It won’t be a surprise if Audra uses this opportunity to move the coin and come a bit closer to her goal. Now that Audra and Nate might be staying in Milwaukee, this may give Audra the hope that she can make a move at the right time. Fans know that it is not new for her to hit on guys who are already committed. Noah is a good example of that!

Now that both are in Milwaukee, this could actually give them the opportunity to mix business with pleasure. Since both flirt with each other on some occasions, this flirty vibe might actually escalate in the upcoming weeks. Both might surrender to the sparks and hit the sheets. If this happens, it will become good blackmailing material for Audra who might use it later on him. Whatever the case, Nate is doomed if he crosses the line without even thinking of the consequences. Stay tuned and watch The Young And The Restless, it airs every weekdays on CBS. For more updates and spoilers, visit our website, TV Season & Spoilers.