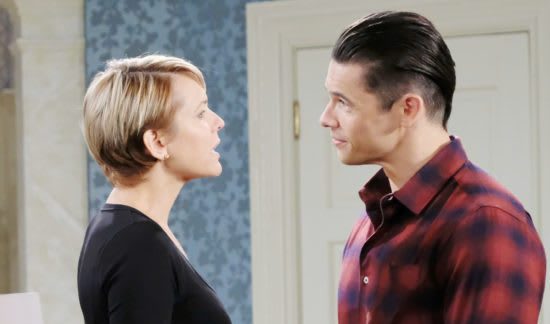 Days Of Our Lives Spoilers For the upcoming week suggest that the storyline will revolve around Eve, Claire, and Nicole. Things are going to get intense with most of the characters. Let’s take a look at how the storyline will unfold when the characters are not themselves. Speaking of which, Nicole is suffering a significant loss. Eve’s focus is going to be on Ben, and he is going to need to watch out. Tripp will do something to piss off Claire, and she will blame Eve for that.

Days Of Our Lives Spoilers: Nicole Will Lash Out

Rumer has been out that Nicole is not herself. There is going to be a funeral for Holly and Nicole’s behavior is going to be appalling. It is understandable that she is grieving with the loss of her child. But the way she is lashing out makes us wonder whether the person is really Nicole or an imposter. The latest information reveals that Nicole or whoever that person is is well aware that Holly is not dead. In fact, it is Xander who stole the little child.

In the latest #DAYS, Sarah tries to speak with Nicole on Eric's behalf.https://t.co/ZsCmioRrzb pic.twitter.com/0bwUe9U71M

Eric, Sarah, Maggie, and everyone close to Holly was present. After the funeral, Nicole lashed out to all those who loved Holly. She blamed them for her death and made sure that they feel terrible. Some other imposter red flags include Nicole firing at Maggie who is already devastated over her grad daughter’s death. She also made sure to let Sarah and Eric have it. She figured out that Sarah has a thing for Eric and used it against her.

However, Nicole is going to go a step further. The big twist is going to make fans almost sure that Nicole is not really herself. She locked lips with Brady after he held her and comforted her. Eric was already upset over her lashing out. This was the final blow for him.

According to DOOL spoilers, Stacy Haiduk is going to return for playing the role of Kristen DiMera. Kissing Brady is definitely something that she could do. Moreover, she has better reasons to hurt Eric, Sarah, and those close to Nicole.

Eve’s mind is captured with revenge, and now she has her eyes on Ben. However, he is busy figuring out Claire and her lies. She thinks that Ben hasn’t suffered enough for her daughter’s murder. She is going to plot revenge on him. In the meantime, Tripp will dump Claire, and she will blame Eve for the same. She might put Donovan in his place and even Eve might need to watch out.

What’s going on with Jack And Maggie?

According to Days Of Our Lives Spoilers, Maggie will be devastated and turn to the bottle again. Her addiction will gain and lead to Brady finding Maggie passed out. Jack will win Salem’s mayoral and will make some powerful moves. Stay tuned with TV Season Spoilers to get Days of Our Lives Spoilers and updates for upcoming episodes.