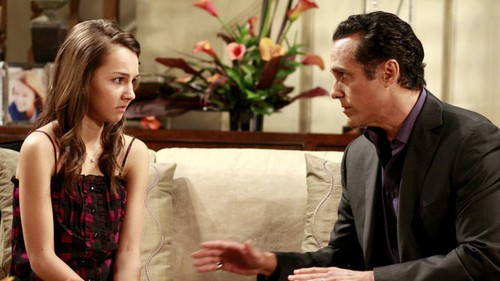 Here are the ABC’s General Hospital Spoilers for the week of August 20-24. This week will be full of exciting episodes as the action will heat up in Port Charles. A few things will be going to take place in the soap to thrill its fans. Brad(Parry Shan) will freak out on the demand of Alexis (Nancy Lee Grahn) who wants her baby back. However, the real Wiley is dead making the situation tight for Brad.

Brad is relying only on Julian’s advice to come out from this mess. Brad was holding the secrets to himself and if Kim (Tamara Braun) will come to know that, she wouldn’t approve. Julian would also not be able to bear the idea of devastating Lucas instead his full focus will be on finding the birth mom. It is to see whether they will sort this out for Brucas or not!

During the baby crisis that Lucas is bearing, Sam (Kelly Monaco) will be side by him. In the meantime, Carly (Laura Wright) will find support in Sonny (Maurice Benard) as the failed adoption will prove toughest for Carly. Her thought that Lucas’ fatherhood dreams will go up in smoke, frustrates her more.

Things will definitely be going to sort out soon especially the adoption matter and all the credit will fall in Julian. On the other hand, Valentin (James Patrick Stuart) will raise the curtains from a buried family secret which could involve Nina’s (Michelle Stafford) past as the secret will come out from Madeline Reeves (Donna Mills).

Elsewhere, Lulu will be seen rejecting the reunion plan while Valentin gains approval. The upcoming General Hospital spoiler will reveal the reason behind the rejection by Lulu. Will Peter’s involvement would make sense as Lulu will tell Maxie (Kirsten Storms) what’s up later?

Also, General Hospital spoilers say Alexis (Nancy Lee Grahn) and Kristina (Lexi Ainsworth) will be seen strengthening their bond. Kristina can place an offer for a reason for keeping Alexis at a distance. However, she is a bit embarrassed seeing her relationship’s status with Parker (Ashley Jones) as she thinks she has a very separate life from her. Not only that, Kristina will even suspect her for cheating too.

Veethee - Saturday, 28 March 2020, 11:59 AM
0
Counting On star Derick seems to have taken a pledge to expose the gray areas of the family. Earlier, he talked about Jim Bob...

Days Of Our Lives Spoilers: Gabi To See Stefan, Is He...