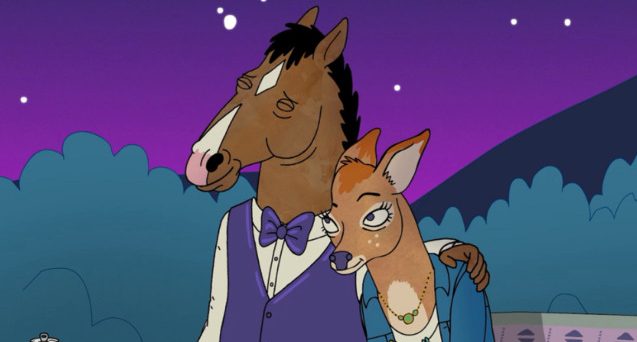 As Netflix took its step into the adult animated genre, BoJack Horseman came to life, and we’re glad he did. As of now, he’s returning with BoJack Horseman Season 6, and fans want him back as soon as possible. The human-like horse is one of the craziest characters ever. Here’s literally everything we know of his return yet. Why’s the streamer taking so long?
BoJack Horseman, an anti-hero protagonist, is a successful failure. A washed-up 1990s star attempts to return to the limelight. He takes on a very ambitious project and struggles to be back at it again. It’s weird yet amazing that an animated character seems so much realistic. Despite not being a human, he precise represents how messed-up humans are.
On the other hand, the series is exceptionally relatable and bravely highlights depression and trauma. It also touches on issues like addiction, self-destructive behavior, racism, and sexism. Initially doubting the first-half of Season 1, critics went on to adore and acclaim everything after it. Whereas, the audience just fell in love with the way Horseman’s story was presented.

Fans never doubted the future of the series as they’re pretty sure that it deserves to have a hundred seasons ahead. Netflix has been confident about the anthropomorphic horse too. The streamer had been renewing the show since its debut back in 2014. BoJack Horseman Season 6 already claimed its green flag back in October 2019. In a bizarre manner, BoJack gave us the news through a social media post.

woooowwwwwwwwwwwwwww lets all forget about the fact that theres going to b a season 6 and focus on this inedible arrangement @netflix sent me just woww pic.twitter.com/7XJyE6Egsu

BoJack is going to rehab. Yes, as of Season 5 finale, we saw Diane dropping BoJack off at a rehab clinic. After the mess, he created at the set, the human-like horse is now inching towards redemption. Season 6 may focus a lot upon his struggles to deal with his addiction.


On the other hand, BoJack Horseman Season 6 will also highlight Princess Carolyn adjusting to motherhood. She happily adopted a child at the end of the previous season. Whereas, we also saw Mr. Peanutbutter proposing to his much younger girlfriend. Hence, in the latest season, he will be seen preparing for his fourth wedding. Moreover, we may also get to see a lot more things.

Horseman really wanted to get an Emmy Award this time. As fans, we agree he should get one, but the time is yet to come. The cool human-like horse went as far as writing tweets to Emmy Awards Association to give him an award this year. BoJack even made a poster for their convenience. We love his sarcasm and hope that he wins one next year.

did i win an emmy yet

We’ve all been expecting a release date from Netflix for a while now. The streamer is yet to make any official announcement. However, BoJack Horseman Season 6 may hopefully hit the screens sometime towards the end of 2019 for sure. Fans are super-excited for his return this time. Moreover, we hope that we get a trailer soon as well.