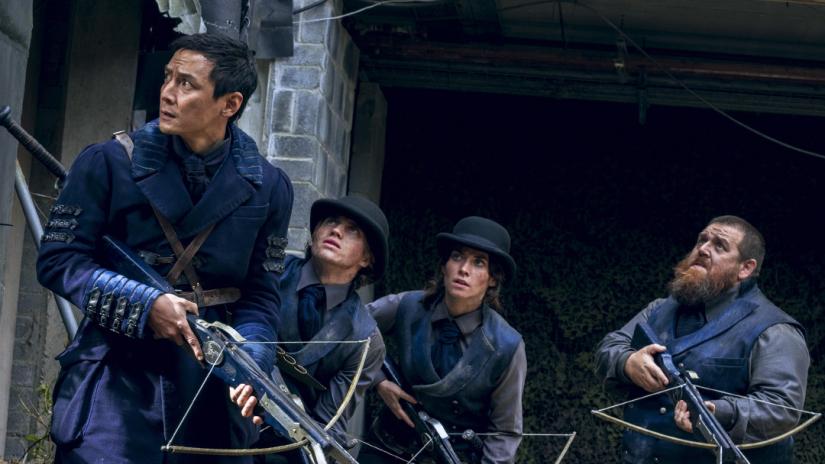 Into The Badlands Season 4: Will Netflix Pick Up The Series? Spinoff & Cancelation Details

Season three of Daniel Wu’s series concluded in May. Since then fans are hoping for the renewal of the series for Into the Badlands Season 4. So, is the martial arts series returning? Is Netflix picking up the series? Many kinds of rumors are floating around the internet. Here’s everything that we know about the AMC series so far.
Into the Badlands is an American TV series that debuted on November 15, 2015, on AMC. On February 9, 2019, AMC officially canceled the series after three seasons. The series finale premiered on May 6, 2019, and since then fans are downhearted praying for a miracle.
The AMC series follows a warrior and a young boy’s journey through to a dangerous gothic land as they seek enlightenment together. The series centers a post-apocalyptic world roughly 500 years after a war that almost destroyed civilization. Several elements of technology, like ground vehicles and electricity, survived the apocalypse. However, society now avoids guns and relay on crossbows and melee weapons.

Into The Badlands Season 4: Netflix To Pick Up The Show?

Ever since the heart-breaking news about the cancellation of the show, fans are expecting Netflix to pick up the show. However, this is a long shot; it is possible.

Netflix is known for picking up canceled shows with a cult following. As followers of the show are demanding for its continuation, the streaming giants might make moves soon.
Reportedly, couldn’t achieve its target rating for season 3. It is possibly the only reason why behind the cancellation of Into the Badlands Season 4.
However, Netflix remains mum about saving Into the Badlands Season 4. With its unusual premise, we can expect the streamers to continue the show. Although the series featured unexpected twists and ended up unlikely, the acting and action are good enough for the renewal.

Into The Badlands Spinoff

After AMC’s final decision of canceling Into the Badlands, showrunners and the network were discussing spinoff plans.
In a recent interview with Indie Wire, showrunners revealed some information about the spinoff project.

Into The Badlands Season 4: Cancellation Details

Reportedly, there were early indications that AMC might cancel Into the Badlands sooner or later. The network took a while to finalize the show’s return after its midseason break.
AMC lost interest in the series by not giving the show a good schedule and same attention in the promotions. The network was more focused on its other shows like ‘The Walking Dead’ franchise.
Moreover, the drastic drop in the ratings was one of the reasons as well why AMC canceled the series.
As of now, Into the Badlands Season 4 is not going to another network or platform. The spinoff is also just an idea for now. However, fans are still hoping that Netflix can save the series like it always does.