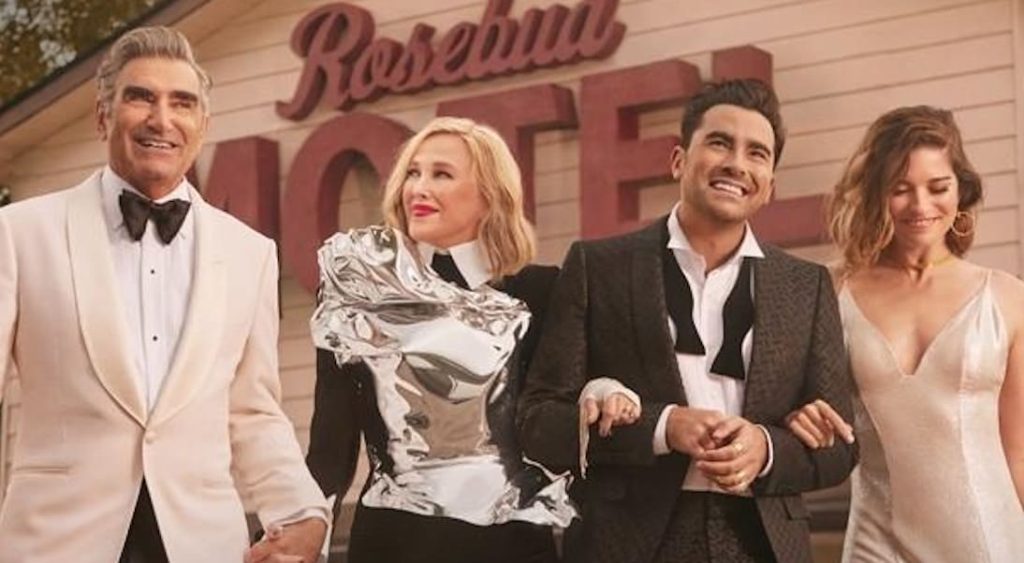 The Schitt’s Creek’s Roses are back, and the fans are feeling a series of emotions all at once. It feels like it’s been ages since the last season dropped, and now, finally, Pop TV has released a teaser trailer for Schitt’s Creek season 6.
Schitt’s Creek is a story of the wealthy Rose family who has a humongous video store business. The family loses all their fortune after their business manager frauds them. Following this, the family has to rebuild their lives all over again. However, they have one asset left- A small village- Schitt’s Creek that they had gifted to their son on his birthday as a joke back in 1991.
The Roses shift to the Schitt’s Creek in a run-down motel. As the family is trying to adjust to their new lifestyle, their old habits become the cause of various issues between them and the residents of Schitt’s Creek.
POP TV has finally released a 30 seconds teaser trailer. You can see it here-
https://twitter.com/SchittsCreekPop/status/1196458044290297857?ref_src=twsrc%5Etfw%7Ctwcamp%5Etweetembed%7Ctwterm%5E1196458044290297857&ref_url=https%3A%2F%2Fwww.pride.com%2Ftv%2F2019%2F11%2F18%2Fschitts-creek-final-season-trailer-here-and-were-sobbing
The trailer portrays Roses strolling hand in hand, happy and smiling past the Rosebud Motel. They’re all wearing fancy, formal attires that although is nothing extravagant for them.

There’s a lot that could be happening in the upcoming episodes’ plot. This is all that could happen-

There Will Be A Wedding

In the forthcoming season, the storyline will mainly focus on Patrick Brewer and David Rose’s wedding. It will be a happy ending. Although there might be a few hurdles before they get there.


Fans might get to see Rachel, Patrick’s ex-fiancée. She never got closure after learning that Patrick was gay back in season 4. It’s not just Patrick; it is possible that one of David’s exes could turn up at the wedding and cause some fight? Basically, anything could happen.

Will Moira Get Her Ticket Out?

Everyone seems to have grown attached to the town and finally found their happiness there, but there is someone who is in the same place where she was in the first season- Moira. Moira, by the end of the fifth season, had again started feeling trapped in the town. She had thought that the B-list horror movie The Crows Have Eyes III: The Crowering will be her ticket out, but she finds out it has been closed indefinitely.
What’s to see is, will she get a way out of the town, or will she get content with staying close to her family and enjoying the simple pleasures of life.

Will Stevie Have A Partner?

A storyline that remains unattended is Stevie Budd’s. Stevie is the sarcastic, reluctant owner of the ever famous Rosebud Motel.


Throughout the series, she has talked about her lonely life and how she wants to escape it.
Will she find her escape in the upcoming season? We will have to see.

Schitt’s Creek season 6 will be the final season of the series. The show will premiere on 7th January 2020 on pop TV in the US.
Even if this is the final good-byes, what we know is, the fans will laugh, cry, and feel a rollercoaster of emotions as the show hits the screens for the last time!