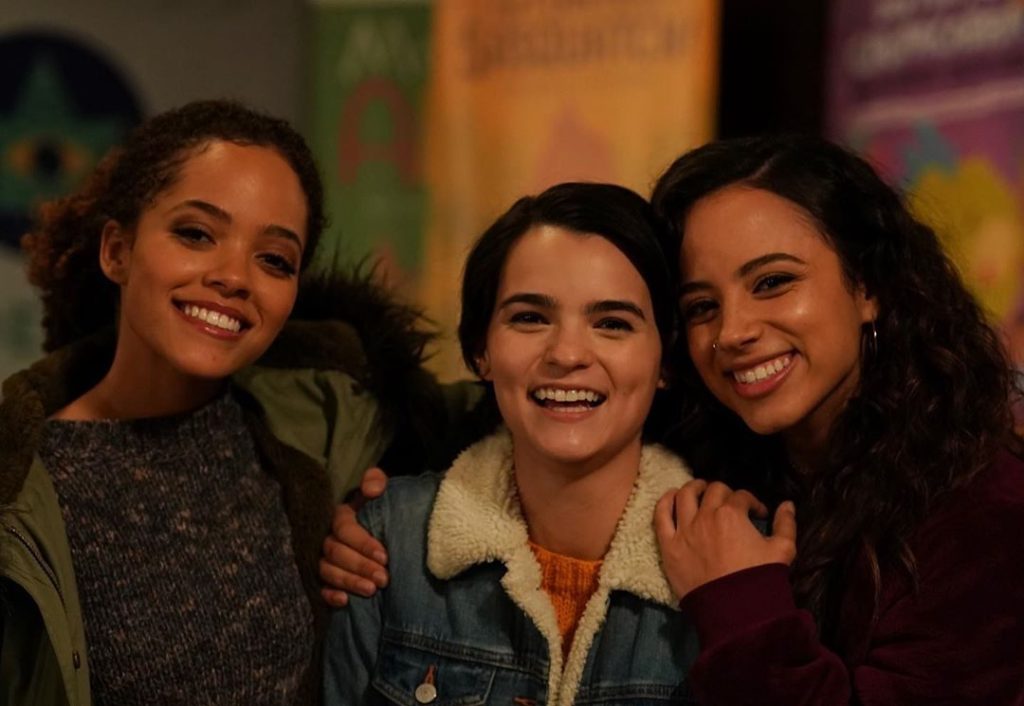 Netflix has finally heard our prayers. Trinkets Season 2 is greenlit and set to return soon. Unfortunately, this will be the last time we see our trinkets back on screen again. The streamer has announced the official renewal of the second and final installment of the show. But how long do we have to wait for it? Here’s everything to know.
One of the coolest women-led shows of Summer 2019 introduced us to three complicated ladies, Elodie, Moe, and Tabitha. Trinkets is based on the famous novel by Kirsten “Kiwi” Smith. Netflix’s new series is a triumph for all the female-creators. Starring Brianna Hildebrand, Kiana Madeira, and Quintessa Swindell, the story follows the leads on a unique journey.


Netflix’s popular series is about three girls that end up becoming friends after they meet at the Shoplifter’s Anonymous meeting. They instantly bond and begin their journey together towards their complicated life decisions. Elodie, Moe, and Tabitha have totally different personalities, yet find strength in each other. The must-watch series has ten half an hour episodes to binge.

The series debuted back on June 14, 2019. It was well-received by the audience and critics alike. Soon after the premiere, fans began demanding for a second installment. Netflix decided to answer the burning question and declared the return of Trinkets Seas on 2. The news was announced via its official social media platforms.

Though, the streamer declared Season 2 to be the final installment of the teen drama. Hundreds of fans online expressed their disappointment. Viewers expected the series to last longer. Besides, the reason for the discontinuation is yet unknown.

What The Future Holds For The Girls?

The debut installment ended on a complicated note. Fans need to know what happens next. The cast of Trinkets gave us a heart to heart insight into their character’s future. Hildebrand plays Elodie on the show and hopes that her character starts to own a little bit of who she is. Elodie was introduced as a socially awkward teenager since the beginning of the series. Like Brianna, we hope she finally accepts herself the way she is, with pride and not anxiety.
On the other hand, Kiana Madeira hopes a whole new angle in her character’s story. She hopes that Moe’s future involves romance and emotional honesty. Moreover, the actress wishes that Moe develops a close relationship with her family in Trinkets Season 2.
Actress Quintessa Swindell thinks that Tabitha’s future holds a lot of new-found comfort with her mother. Moreover, she hopes her character to have the ability to convey different ideas to people around her. Well, like Swindell, we want Tabitha to excel in the world all-around too. Writers of Trinkets Season 2 need to take notes because fans agree with all three divas here.

When Will The Trinkets Return?

Trinkets Season 2 has no official premiere date yet. The installment is still to go into productions and may take a while to return. However, most of the teen dramas on Netflix have an annual release date. Season 1 of the show aired in June 2019. Hence, the upcoming season may return around the same time next year. We may expect to be back by June 2020.
Fans have had varied opinions about the show. Luckily, most of them are positive. Viewers have appreciated the style and characterization. On the other hand, many love the performances by all the cast members. We hope that Trinkets Season 2 continues to impress. Elodie, Moe, and Tabitha deserve the best farewell in the world.