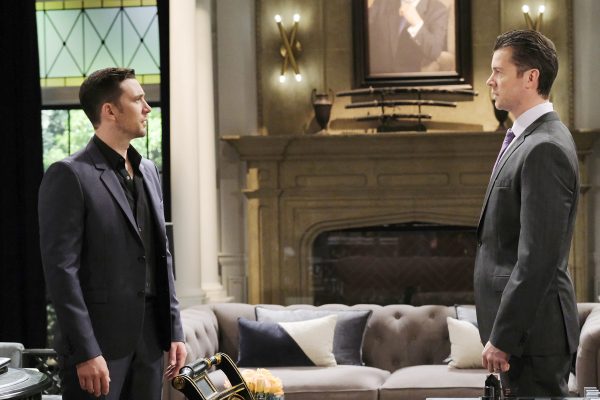 Days of Our Lives spoilers for the week of January 10, 2022, reveal that while Marlena might be out of Devils’ clutches now, Satan’s terror will not end here. Johnny is now possessed. So, he will make some moves in the upcoming days. Whatever he does, it will affect Chanel big time. So, she will be heartbroken.

Then, Ciara and Ben will also mull on thought and come to a conclusion. Days of Our Lives viewers will also get to see Steve and Kayla as they go on an adventure. More spoilers for the week of January 10, 2022, suggest that Abigail will get a clue, and Lucas will return too. What more will happen? Here is everything to know about it.

Starting the week of January 10, 2022, Devil will continue causing chaos through Johnny DiMera. Now that Johnny is possessed, he will do whatever the Devil asks him to. As per the Days of Our Lives spoilers, Johnny will make an announcement at the party Paulina is throwing for them, and that will leave Chanel heartbroken.

While we don’t know what Johnny will say, we can make some guesses. It is likely, DiMera might announce a permanent separation, annulment, or maybe his exit from the town. Whatever he might announce, it is likely that it will break Chanel’s heart.

After getting heartbroken, Chanel will be feeling lost. But that isn’t all that will happen with her. As per Tv Season & Spoilers, things will get rather intense between Allie and Chanel in the upcoming days. This spoiler could mean anything. It is possible that Chanel and Allie’s chemistry might heat up, or it is possible that things might become tense there. If Chanel leaves Johnny, there is a possibility that Allie might remind Chanel that she had already warned her about this, but Chanel did not listen.

Ciara And Ben Make A Decision

While Chanel deals with whatever Devil Johnny is doing, Ciara and Ben will also have an important decision to make. The two of them will most likely be concerned about their baby that’s on the way. Could the Devil have left some hints about its presence? It looks like both Ben and Ciara will believe that it would be in their best interest that they leave Salem for some time.

Days Of Our Lives: Rafe Gets Some News

In the week of January 10, 2022, we will also see Rafe as he gets some shocking news. As per the spoilers, Ava will plot her revenge plan against Rafe and Nicole in the upcoming days. This will put Nicole in a terrifying situation. She will then call Rafe and ask him to help her out. After that, both Nicole and Rafe will take the time to solve this mystery.

On the other end of the town, Steve and Kayla

will be out on an adventure of their own. They will head to Italy looking for Kristen DiMera. Brady will ask Steve to find Kristen, but Kayla will not want him to go alone. So, these two will hop on the board and start this adventure.

Days Of Our Lives: Sarah’s Investigation

Days of Our Lives spoilers further reveal that the upcoming week won’t be all gloomy. In fact, there will be some good news too. As per the latest spoilers, Abigail will find a clue that would help them solve Sarah’s disappearance case. So, she will reach out to Xander and tell him about that. DOOL viewers know that both of them have joined hands to figure out the truth. So, will this clue help them? How will Gwen react to all of this? Only time will tell.

Not like Lucas has been gone for long, but Days of Our Lives spoilers suggest that Lucas Horton will make his way back to Salem in the upcoming week. DOOL viewers who have been keeping up with the soap know Sami and Lucas left Salem to build a life in Europe. But, it looks like something will happen in Salem that will bring Lucas back. Could it be EJ’s hearing? It is possible. There is no mention of whether or not Sami will return. So, we will have to wait to know more about it.

Speaking of EJ and Chad, Days of Our Lives viewers know that the only reason Lucas was able to put Chad behind bars was that Chad helped him. But, the upcoming week of January 10, 2022, suggests that Chad will start feeling a little guilty. Chad is a good person at heart, and he might not like what he did to EJ. So, when it comes to EJ’s hearing, will Chad stand up, to tell the truth? We will have to wait to know.

Chloe Gets An Unexpected Visitor

Rounding off the week of January 10, 2022, will be Chloe, who will get an unexpected visitor in the upcoming days. As per Soap Opera Digest, Chloe’s mom is returning soon. So, this unexpected visitor could very easily be Chloe’s mom. It is possible that Nancy will swing by Salem to visit her daughter in the upcoming days. What would Nancy’s storyline be? Only time will tell. Tv Season & Spoilers will keep passing on all the updates about the soap as it surfaces. So, stay tuned. Days of Our Lives airs on NBC all weekdays. Don’t miss the action.