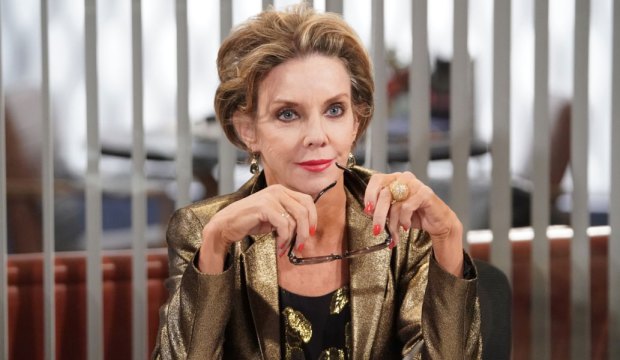 The Young And The Restless Spoilers For The Week Of November 22, 2021: Nick And Sharon Come Closer, Gloria Returns

The Young and the Restless spoilers for the week of November 22, 2021, are out, and it reveals that Abby will continue to be MIA this week. Devon will grow closer to Dominic, and he will get a lot of appreciation for that. Next, viewers will get to see Lily and Billy as they work to save their company from Ashland. Thanksgiving festivities will also roll out in the upcoming week. So, there will be some drama there. What will happen? Here is everything to know.

The Young And The Restless: Abby Is Still Away

Starting off the week of November 22, 2021, The Young and the Restless spoilers confirm that Abby will still be gone from Genoa City as she tries to find Chance. Since Abby is away, Devon will be there to take care of Dominic. But will anyone be able to locate Abby? She is MIA. So, Victor and Ashley might start getting worried.

Speaking of Devon, The Young and the Restless spoilers suggest that Elena will visit him at the penthouse. She will appreciate the good work he is doing with the baby and also praise him for being a good friend to Abby. More related spoilers suggest that Devon’s girlfriend Amanda will continue to support everything that Devon is doing.

In fact, the two of them will share some tender moments in the upcoming days. So, they might grow closer with Dominic around. Elsewhere, spoilers suggest that Amanda will meet with Imani at the Society. What could that be about? We’ll have to wait to know.

The Young and the Restless spoilers suggest that Mariah will continue to struggle. Y&R viewers know that Mariah doesn’t like the fact that Abby chose Devon to take care of the baby and not her. So, she will continue having issues with this. She will find it difficult to see Devon and Dominic bonding. So, she might be closer to a breakdown.

The Young And The Restless: Billy And Lily Visit Ashland And Victoria

On the other end of the town, Y&R viewers will get to see Billy and Lily as they visit Ashland and Victoria. It looks like this will have something to do with the lawsuit Ashland has launched against ChancComm. Billy and Lily might try to convince him to back down. But, will they be able to do so? They might try to convince Ashland that this is the wrong move. More related spoilers suggest that Lily will call Jill Abbott, and she will come to Genoa City.

The Young and the Restless spoilers also confirm that the upcoming week of November 22 will witness the Thanksgiving festivities. So, Y&R viewers will get to see a number of family gatherings in Genoa City. Gloria is coming back. So, she will reunite with her family, and it will be fun to see what she brings in. Quartermaine family will also enjoy the festivities with some wine and pizza. So, this will be all heartwarming to see.

The Young And The Restless: Sharon And Nick Come Closer

Speaking of Thanksgiving, The Young and the Restless spoilers suggest that Sharon will host her annual Thanksgiving dinner for the homeless, and Nick might show up to help. Y&R viewers know that Nick is pretty shaken since he and Phyllis have broken up. So, he might volunteer to help Sharon, hoping it would distract him. But would they come closer? Is it a sign that they might reunite once again? We will have to wait to know.

Fame10 reports that there is a rather cryptic teaser regarding Phyllis in the week of November 22. Spoilers suggest that Phyllis will wake up from bed in astonishment. While we don’t know what that is, it will either be she waking up from a dream or maybe, she might wind up spending the night with someone after she has had too many drinks. So, so might have to deal with whatever is coming her way.

The Young And The Restless: Pre-emption Coming Up

Before we wrap up, The Young and the Restless viewers must know that the soap opera will be pre-empted on November 25 and November 26, 2021. This is because of the American Thanksgiving. On November 25, Y&R viewers will get to see the Victoria-Ashland wedding episode. But there will be no episode on Friday. So, keep that in mind.

However, the show will resume normal airing on Monday, November 29, 2021. Before that happens, the three days that The Young and the Restless will air will be full of action. Don’t miss out.