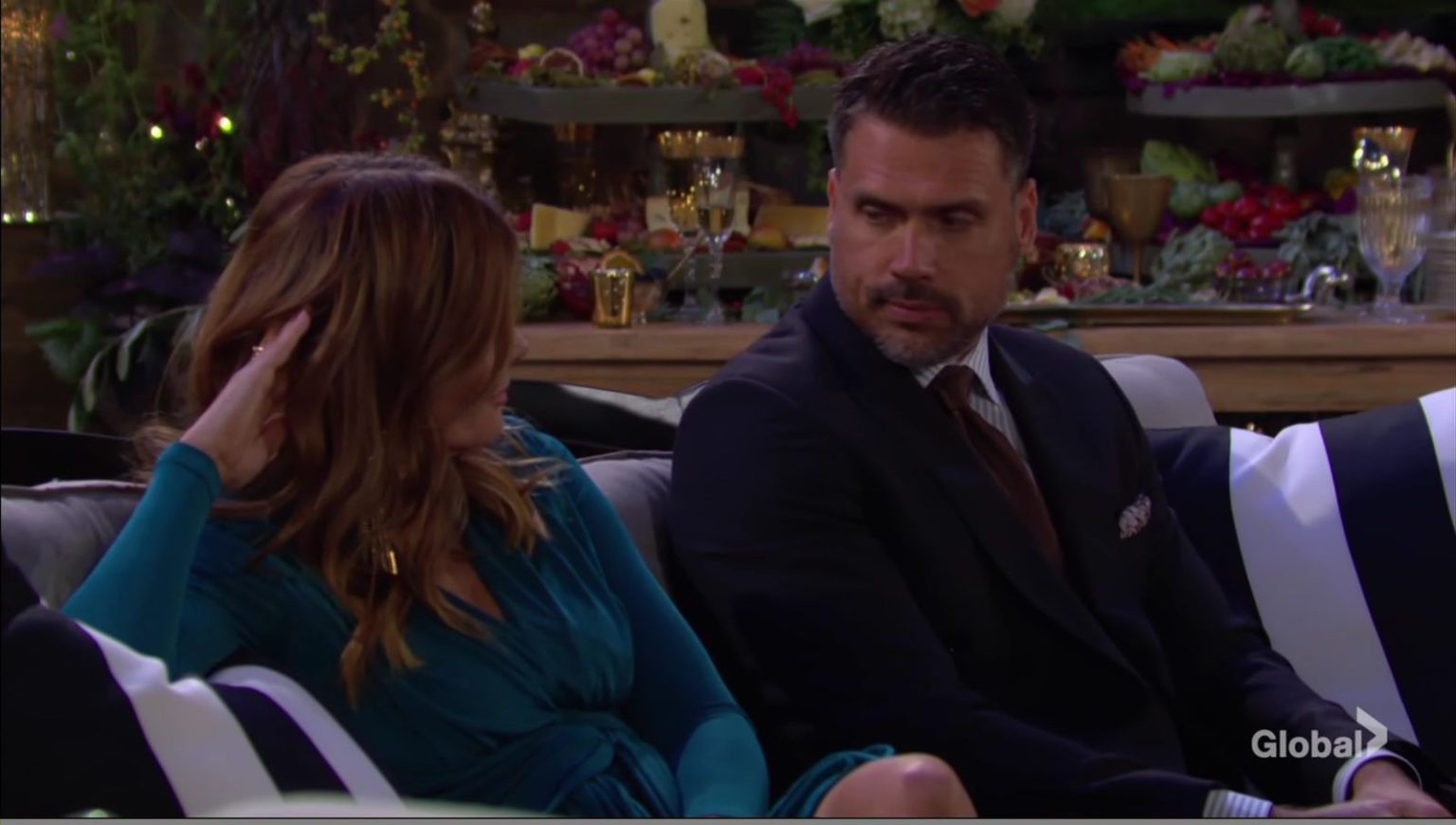 The Young And The Restless Spoilers For Wednesday (November 17, 2021): Mariah Is Furious With Abby, Phyllis Meets With Nick

The Young and the Restless spoilers for Wednesday, November 17, 2021, are out, and it reveals that Mariah will be furious with Abby for abandoning Dominic. In contrast, Devon will be happy spending time with Dominic. In addition, Phyllis will have breakfast with Nick, whereas Jack will later confess his feelings for her. More spoilers suggest that Tessa will randomly meet Noah in a coffeehouse and have a discussion with him. What will they talk about? Here’s everything to know.

The Young And The Restless Spoilers: Mariah Arrives At Chancellor’s Mansion

The Young and the Restless spoilers for Wednesday, November 17, 2021, suggest that Mariah reaches Chancellor’s mansion and asks about Abby. But Ashley will tell her that she left early in the morning. Mariah will also come to know that Dominic is currently staying with Devon. Spoilers suggest that this news will break Mariah’s heart. But Ashley will try to console her and tell her that it was solely Abby’s decision.

More related spoilers suggest that Mariah will be upset that she wasn’t even in the line to look after Dominic. However, Ashley will recommend Mariah not to take this personally. After listening to Ashley, Mariah will try to understand. Finally, Mariah will tell her that she will check on Bowie at Devon’s place before going to work.

The Young and the Restless spoilers reveal that Devon will be delighted to spend time with Dominic. He will also think that Dominic is becoming comfortable with the penthouse’s surroundings. Moreover, Amanda will agree that Dominic needed this peaceful routine after all the Chancellor Mansion’s negativity. More Y&R spoilers suggest that Moses Winters will tell Devon that Dominic has the same eyes as Devon.

Meanwhile, Mariah will arrive at Devon’s penthouse. She will be happy to see Dominic in a positive environment finally. However, Mariah will also admit that she is upset with Abby as Abby didn’t ask her to look after Dominic. But, Devon will convince her that Dominic is with him temporary, and she can visit them whenever she wants.

Further related spoilers reveal that Mariah will tell Devon that Abby went MIA in the morning. Hence, Devon will remember that Abby mentioned leaving the town. Mariah will be concerned about Abby as no one knows her further travel plans. Later, Nick will also visit Devon for a meeting which Devon forgot about. And he will come to know about Abby’s disappearance. Eventually, They will both decide to join hands and find her.

The Young And The Restless: Ashley’s dilemma

The Young and the Restless spoilers suggest that Ashley will be worried for Abby. Abby went somewhere without telling anyone. So Ashley will leave a voicemail to Abby requesting her to call back and tell her whereabouts. But she won’t get any response from Abby.

More spoilers suggest that Ashley meets Devon and tells him that Abby packed her bags before leaving the mansion. Ashley will be worried as Abby’s name is not registered in any nearby hotel, and she has no clue where her daughter has gone. As soon as Ashley reaches Chancellor’s mansion, she will again call Abby but gets no response in return.

Phyllis And Nick Talk Over Breakfast

The Young and the Restless spoilers for Wednesday’s episode reveal that Phyllis randomly meets Nick at Society. Nick will feel like making things comfortable between them. Hence he will ask Phyllis to have breakfast with him. Of course, Phyllis will argue that things can’t work out, but Nick wants to stay friends with her.

More spoilers suggest that Nick will also force Phyllis to tell what’s going on in her mind. Hence, she will ask about his family, and Nick will inform her that he is away from Ashland’s matter. Of course, it will make Phyllis furious as she said the same thing before, but Nick never heard her. But she will also feel great that she doesn’t have to worry about getting dumped. Later, Phyllis will tell Nick that Summer was upset with their breakup. Nick hopes to meet Phyllis again as he gets up to go, but she won’t think alike.

The Young And The Restless: Jack Approaches Phyllis’ Table

The Y&R spoilers reveal that after Nick leaves, Jack will see that Phyllis is not looking fine. So, he will go to her table and ask her what has happened. Phyllis will start to tell him the truth but she will soon feel like she needs to be there for Jack as he is already tense about Abby. Later, Phyllis gets emotional and tells Jack that she will be there for him. Will Phyllis and Jack get together? It is likely. Spoilers suggest that after Phyll is leaves and returns to The Grand Phoenix, she thinks about Jack and realizes that she still loves him.

The Young and the Restless spoilers suggest that Lauren and Michael will just hate that Phick’s relationship is over. They will also discuss the things that went wrong with Phyllis and Nick. Later Lauren and Michael will meet Jack for breakfast. Spoilers suggest that Lauren might advise Jack to be Phyllis’s friend and not repeat past mistakes. But Jack will tell her that he is growing older and wiser.

More spoilers suggest that Michael will see Amanda there and take her aside to talk. He will ensure her that he is expecting positive results in the case from the jury. Michael will tell her that he feels like the jury doesn’t want Sutton Ames to walk free. Amanda will hope that whatever he is saying is true.

The Young And The Restless Spoilers: Tessa Runs Into Noah At The Coffeehouse

Tessa will see Noah at the coffeehouse, so she will go and talk to him. Noah will look a little upset over a text. The Young and the Restless spoilers suggest that Tessa tells Noah that she has re-signed with Devon’s label. Hence, her first full-length album is coming out, and she would like Noah to design the cover art for the album.

Spoilers suggest that Noah will be initially doubtful as he likes his creative freedom, but he never got it at Newman Media. But Tessa will tell him that Devon won’t behave like them and convince Noah to listen to her songs and then decide.

Mariah Is Furious With Abby

The Young and the Restless spoilers suggest that Mariah tells Tessa that Dominic is with Devon. She will be disappointed that Abby didn’t choose her to look after Dominic’s care. Mariah will also think that no one trusts her. However, Tessa will believe that Abby is struggling, and she must have gotten sensitive. Celebdirtylaundry.com reveals that Mariah will be furious that Abby left the town and abandoned Dominic. And she will eventually think that Abby is irresponsible towards Dominic.

More Y&R spoilers for Wednesday’s episode reveal that Ashland will sue ChancComm when Billy struggles to save it. What will be Victor’s next move? Let’s see. Spoilers suggest that Ashley will tell Jack about Chance’s presumed death.

Also, Celebratingthesoaps.com hints that Ashley will share some unexpected news. But, will it be about Chance? or will she get any updates about Abby? The Young And The Restless Wednesday episode is full of drama. So, be sure to tune in and enjoy. For all the updates and news about Y&R, Tvseasonspoilers.com is your one-time stop.