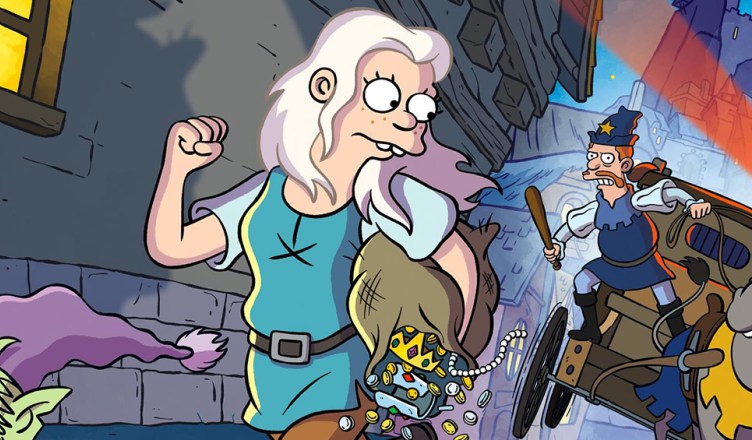 Disenchantment Season 2: Can the Series Make a Good Comeback?

There is a lot to talk about Disenchantment Season 2. The first season, when premiered in 2018, had reasonably good expectations because of the involvement of Matt Groening (creator behind The Simpsons). The show received a lukewarm response from the fans as well as Critics. Can Disenchantment Season 2 bring the audience back to the table? What will be the story in Season 2? Is Matt Groening losing his touch? Let’s find out.

When is Disenchantment Season 2 Coming Out?

Disenchantment was supposed to release with 20 episodes per season but Season 1 premiered with only ten episodes. Another ten episodes are coming out very soon as Disenchantment Part 2. The series follows the adventure of Princess who has only one simple rule – No-sober-always-drunk life with her companion Elfo. Netflix confirmed that the show is renewed for two seasons which will be released in splits with a single season coming out in two parts. The series will be streaming until 2021 if everything goes right.


Disenchantment is one of the few TV shows which are being made by Matt Groening apart from his mega success franchises like Simpsons and Futurama.
Matt Groening revealed in a segment: They are very excited to continue this great journey with Netflix. Stay tuned for more cranked-up suspense, thrilling plot twists and beloved characters getting knocked off. The official release date is yet to be confirmed. It will be sooner than expected release because 20 episodes were filmed together and might be ready to stream.

What Went Wrong With Disenchantment?


The major problem with the show was the high expectations which came riding with Matt Groening’s Name. The issue is that the audience was expecting it in the zone of Simpsons or Futurama with a similar form of satire and storytelling. It is more like severe storytelling with Feminism angle attached to it.
Although, judging the show for it’s the first installment which is yet unfinished as Season 2 will conclude the ongoing story is kind of unfair. Matt Groening’s avid fanbase is actually enjoying the Luke warm reception as they think the show is good and will get better in the future.

Who Will Return in Disenchantment Season 2?

It is difficult to assume that who will return for Disenchantment Season 2. The only people left after the finale are Luci, King Zog, Bean, and Queen Dagmar. It will be interesting to see the fate of Elfo as he was killed in episode 9 of the first part. There might be a possibility that he will be there in Part 2 as we saw in the first half finale that two mysterious characters have taken his body.
Dreamland was stoned in first part, and its future is yet in mystery. Elfo found out that he is actually a half-elf instead of a full-elf. There was also one major character who died while poisoning King Zog, Queen Dagmar. Being told about her mysterious magical powers which are now in a dark place that might be revealed in Disenchantment Season 2.