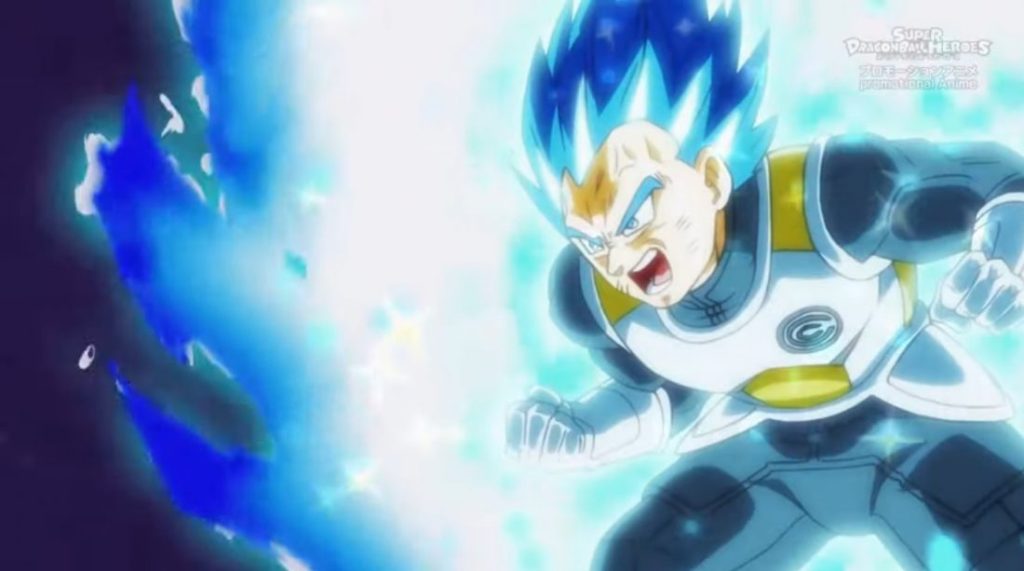 The title of Super Dragon Ball Heroes Episode 35 is “The Pride of the Warrior Race! Vegeta, Awakening!!” Its title itself is indicating that the Prince of Saiyans, Vegeta, will be taking center stage in the next episode. The promotional anime that premiered in order to promote the arcade card game in Japan still continues to amaze the fan of this long-running franchise.

Its “New Space-Time War” arc is one of the most interesting arcs of this non-canonical universe so far. Vegeta will have some sort of awakening in the new episode that will give a tremendous boost to his powers. It will likely give him the edge in his battle against the Evil Saiyan. So, when will the fans see the new episode of this promotional anime? Here are all the latest details.

The official synopsis of the upcoming episode has finally surfaced online. It seems like a lot of things will take place in the next episode, and fans will see not only one but two heated battles. Goku and Hearts will face the Red Masked Saiyan, who has the same hair as Goku. Hence, everyone is getting desperate to know the identity of this masked man. On the other hand, Vegeta will continue his battle with Turles and Cumber.

According to the translated synopsis of Super Dragon Ball Heroes Episode 35, Vegeta is on the edge of going berserk due to all the evil aura. However, since he is the Prince of all Saiyans, he will overcome it with his pride. As a result, Vegeta will get a new awakening, and fans will eventually see the birth of a new warrior.

The 34th episode of this promotional anime began with Frieza and Cooler attacking Goku and Hearts after getting a significant powerup. The Red Masked Saiyan implanted two dark dragon balls in them, which made them overpowered. Moreover, Hearts revealed the same to Goku as well. When Frieza and Cooler were about to launch an attack, Broly appeared out of nowhere. Goku was surprised that he located them in this universe. Broly didn’t waste any time and attacked Goku and Hearts. After that, he beat Cooler and Frieza as well. The mysterious Saiyan came back and collected his dark dragon balls from their body. The episode ended with Vegeta beginning his fight against Turles and Cumber.

Fans just can’t wait to see the Prince of Saiyans in action and that too against two of the strongest fighters. Fortunately, Super Dragon Ball Heroes is all set to release on Sunday, May 9, 2021. It will be a part of the celebration of the special Goku Day in Japan.