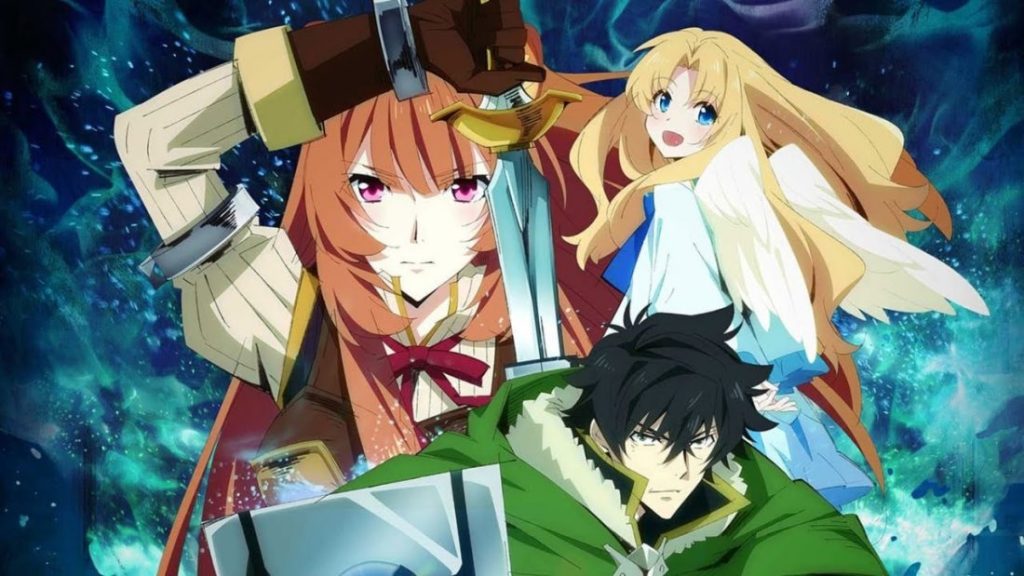 The Rising Of The Shield Hero Season 2: Release Date Out! Official Trailer & Everything To Know

Is The Rising Of The Shield Hero Season 2 finally arriving? Rising of the Shield Hero is a popular Japanese anime series that is a direct adaptation of a light novel series of the same name. The famous dark fantasy isekai LN series is written by Aneko Yusagi.

Coming to anime, the television serialization of the show began in January 2019. The initial episodes of the show gained a massive fan following in just a few weeks. The first season covers the initial five volumes of the light novels. The story of The Rising Of The Shield Hero follows a young boy called Naofumi Iwatani. He finds himself transported into a parallel universe with three other kids. They are called in the world to become the world’s Cardinal Heroes and to fight inter-dimensional monsters called Waves.

At the end of Season 1, it turned out that Naofumi’s decision to leave the country made his life worse than he thought. But thankfully, the Queen takes her place by overthrowing the Church. With this move, the country has got better after a long while. At a time like this, the heroes can finally come home and help others. The show explores their journeys as they turn from normal kids to superheroes. So, let’s explore the possibilities of The Rising Of The Shield Hero Season 2.

The Rising Of The Shield Hero Season 2: Renewal Plans

At the Crunchyroll Expo 2019, the makers of the popular anime confirmed that The Rising Of The Shield Hero would be returning not just for a sequel but also for the third season. The following year after this announcement came out plain. No trailers, teasers, or sneak peeks were released.

In 2020, when the virtual Crunchyroll Expo 2020 took place, the makers announced many updates regarding the show’s renewal. In this announcement, they not only showed the sequel’s trailer but also confirmed that it’s finally on its way. The showrunners confirmed that the sequel would be returning sometime in 2021.

What To Expect Next?

If we look into the production details of the second season, the staff has confirmed that most of the scripting has been done already. Although they did not reveal how much of the light novel would be used in the upcoming installments. The panel did tell about a giant turtle that was seen in the renewal poster. The team said that the turtle is a significant plot device in the upcoming storyline.

The panel also teased some of the events that would take place in the future. It was confirmed that fight scenes and battles would be much fiercer and something that the fans haven’t seen before. They also mentioned that many new characters would be introduced as the story will progress. Some of them will indeed join Naofumi’s team on their adventures. This time, fans can expect higher stakes and an even better plot for the next one.

As mentioned above, during the virtual edition of Crunchyroll Expo for 2020, the makers teased the arrival of Naofumi’s new party members. The revelation came with a special message from the director himself Masato Jinbo. The message was delivered in two exclusive parts.

The first part of the message read about Naomi and his friends. It is said that the protagonist and his friends grew in the plot of the first season. In the second one, they will face the challenges in which they will finally make use of the skills they learned earlier. The chances of seeing a giant enemy called the Spirit Turtle were also teased at the expo.

The second part of the message read about the journeys of Naofumi, Raphtalia, and Filo. How will the three manage to take on the challenges in front of them? New characters will also join the lot to help them in future battles.

The Rising Of The Shield Hero Season 2: Expect New Power-Ups

New places always mean more unknown enemies. Moreover, stronger enemies mean more opportunities for power-ups. This is precisely what would happen in the upcoming episodes of Shield Hero. Naofumi, Raphtalia, and Filo will set out to find troubles that they have never encountered before. We previously saw that Filo was assisted by Vitoria, Queen of the Filolials. Besides, Raphtalia had been training relentlessly to upgrade her techniques and gear.

She had one of the most intriguing character arcs among the three. We saw the fan-favorite character confronting her past, which motivated her to outdo herself in battles. Naofumi’s power up came through a combination of the Curse Series. The protagonist also puts a lot of effort into leveling up his powers. Hence, we will see all three of them trying to increase their powers and become legendary heroes.

So, a new trailer has already been released for The Rising Of The Shield Hero Season 2. Fans of the show went crazy after seeing glimpses of the new installment after such a long time. However, the trailer does not provide a lot of information about the upcoming episodes. Hence, let’s dissect all the clues that we got from this small clip.

The trailer starts with all the prime characters in a courtroom facing the king in the all-new world. Next, we see Raphtalia and Filo recalling all the past memories they went through before entering this new world. We also get to see Filo full of gratitude for being raised by Naofumi. At the same time, Naofumi is seen accepting his own past. All this character development is foreshadowed in the small trailer clip.

Is This The Last Season?

Rising of the Shield Hero is originally adapted from a light novel series of the same name. The series was published in Japan by Media Factory Publications, which were expanded by Seira Minami. Twenty-two volumes have been printed as of June 2019. Currently, the manga adapts up to 17 books of the light novel.

Well, anime adaptations are entirely dependent on their source material. Likewise, the question of the renewal of the Shield Hero anime stands solely upon the availability of enough LN volumes. Many anime go off the air because of the lack of source material. However, this is not the case with this one.

The first season of Shield Hero adapts only the first five volumes of the light novels. We can strongly predict that the next season will adapt a story from the subsequent five volumes. The show may include bits from other volumes as well. The Shield Hero light novel series serialized for a total of 22 volumes by June 2019. This means that there is more than enough source material not just to create a second season but also a third one. If each installment goes to use roughly five light novels, the show might get at least four original seasons. However, after that, the show might not be able to continue.

The Rising Of The Shield Hero Season 2: Will The Cast & Crew Return?

Most of the cast and crew of the show are returning for the sequel. Almost all the voice actors will be returning for their designated roles. This includes Kaito Ishikawa as Naofumi, Asami Seto as Raphtalia, and Rina Hidaka as Filo. Even the production house remains the same as Kinema Citrus. This time, they will be joined by DR Movie for animation work.

Another significant change from the last season is the director of the show. This time, Masato Jinbo will replace Takao Abo as the director in the sequel. The remaining crew is the same, though. Keigo Koyanagi will be handling series composition, Masahiro Suwa will be working on character designs, and Kevin Penkin will be behind the synthesizer composing the background music.

The Rising Of The Shield Hero Season 2: Release Date

As mentioned earlier, the panel members did confirm the return of the show, but they did not give us a definite release date. But, a piece of positive news did come out this month on Twitter. The official handle of The Rising of the Shield Hero announced that the sequel would be releasing sometime in October 2021. The announcement came by, along with the trailer of the second season. Check it out.

Are you excited to watch The Rising Of The Shield Hero Season 2? What are your thoughts about the new trailer? Let us know in the comment section. For more updates on anime, keep an eye on this corner.

The plot of The Rising of the Shield Hero follows the protagonist named Naofumi Iwatani. Naofumi is a perfectly normal Japanese boy whose life turns upside down when he travels to an entirely new world. He is summoned to a parallel universe along with three other humans. The reason the four of them are brought to the new world is to fight interdimensional monsters that go by the name of waves.

Here, they are expected to become the world’s legendary heroes. Each hero is given a legendary weapon of their own. Naofumi’s weapon is a legendary shield, which appears when the heroes need it the most. The other three receive a sword, a spear, and a bow.

Naofumi happens to be different from all the other heroes of that world. Other heroes are supported by their kings and kingdoms, while Naofumi is betrayed by his own companion. The princess left his side when he needed her the most. Later, he was robbed of all his belongings. Moreover, he was also accused of being a sexual offender. After finding himself in the middle of all these troubles alone, he is forced to train to become a hero all by himself.

We’ve come to a point where studios are releasing all kinds of Isekai anime and have degraded the genre’s quality. Finding that an anime is isekai, people always tend to judge it for having a generic story. The same was seen in the case with The Rising Of The Shield Hero. Initially, people thought that show would present the same old dystopian world with heroes training for battles. But the show has much more to offer than just a classic isekai themed story. The core of the show is more about friendship, perseverance, and the true meaning of being a hero.

The show is a mirror image of the natural world that we live in. The themes of the antagonist match our world sharply. We see glimpses of unfairness, corruption, and lies just like human worlds. The show has social commentary in all the fundamental ways. Even in a world of magic and power, the beings are unable to keep the peace.

The Rising Of The Shield Hero puts the heroes in real-life situations rather than unrealistic battles. This results in much better character development. A viewer can quickly point out how much the characters have learned from the first episode. Each arc is well-defined and sharply foreshadowed in previous episodes. This makes the show a worthy contender in some of the top anime in the world.