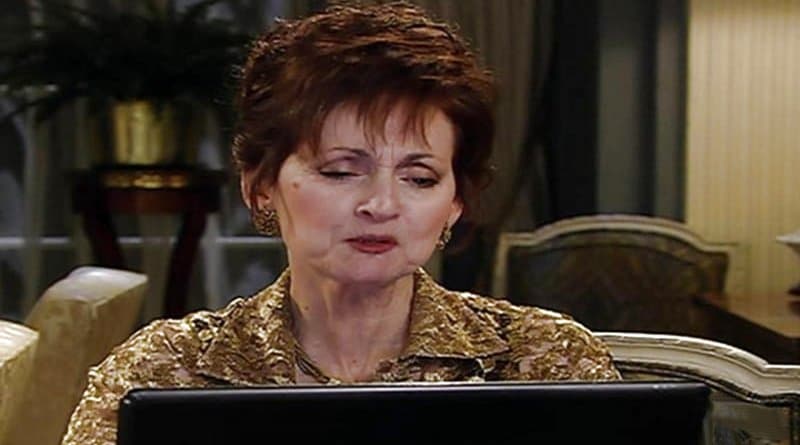 'Days Of Our Lives' Spoilers: Robin Strasser Teases When She Will Appear On DOOL

Days Of Our Lives Spoilers tease new characters coming into Salem gives rise to immense drama on the show. Building on that, the recent DOOL spoilers indicate that actress has opened up about her episode’s air date on Twitter. Fans got the first sneak peek on February 7th. Robin Strasser spoke of an opportunity she couldn’t manage to pass at that time. We got to see a picture of her in the Days Of Our Lives studio where she was getting her hair and makeup done. At that moment, we knew that the actress is going to air on DOOL within the next six months. Since then, fans have been speculating whether the actress is going to be playing the role of Vivian Alamain.

What Does The Latest ‘Days Of Our Lives’ Reveal State?

This time Robin Strasser herself took to Twitter to talk about when an episode starring her is scheduled for a release. Her guest stint on DOOL will take place at the beginning of September. She said that she is going to meet eve and will be in a role that’s anti her. Even though according to the speculations from fans, she is going to play Vivian. However, it’s not confirmed yet. There has been a lot of wait since the show teased the entry of Robin Strasser. Since then, fans have been wondering when they would see her star. But when there was a silence for a few months, it prompted a fan to ask for an update on the star’s starring status.

I've been given approval to reveal: BEGINNING OF SEPTEMBER-I will begin my guest stint on #DOOL Yes the character I play will meet brilliant @KassieDePaiva's EVE but the old gal is definitely not Eve's "Auntie"-more like her "ANTI"-haha-Any more coming from me would be DE TROP;-)

Days Of Our Lives: What Plot Changes Will Robin Strasser Bring?

Louise Sorel, who last played the role of Vivian has left DOOL. The reason for the actress’s departure is still unknown. However, from rumors, we can say that she wasn’t content with her decision to appear on Days of Our Lives. Since the person playing the role of Vivian might change, it will undoubtedly bring some significant plot twists w ith it. The last we saw Vivian was when she came back from the dead after Kate shot her. At the time, she was entirely in her senses. But she needed more attention to get back to normal as there were many patients whom Dr. Rolf has been treating.
If the actress is really playing Vivian, the mother-son reunion is going to be more intense than ever. Moreover, if she testifies in court that Kate shot her, Kate is going to be in some serious trouble. Do you think it’s finally time that Kate suffers the consequences of her bad deeds? After all, she is also making Stefan’s life miserable by pairing up with Gabi.
To see the guest stint unfold to the fullest, we are going to have to wait till September. Who do you think Robin Strasser will play in Days Of Our Lives? Will it be the most speculated character, that is, Vivian? Let us know in the comments below. Stay tuned with TV Season Spoilers to get Days of Our Lives