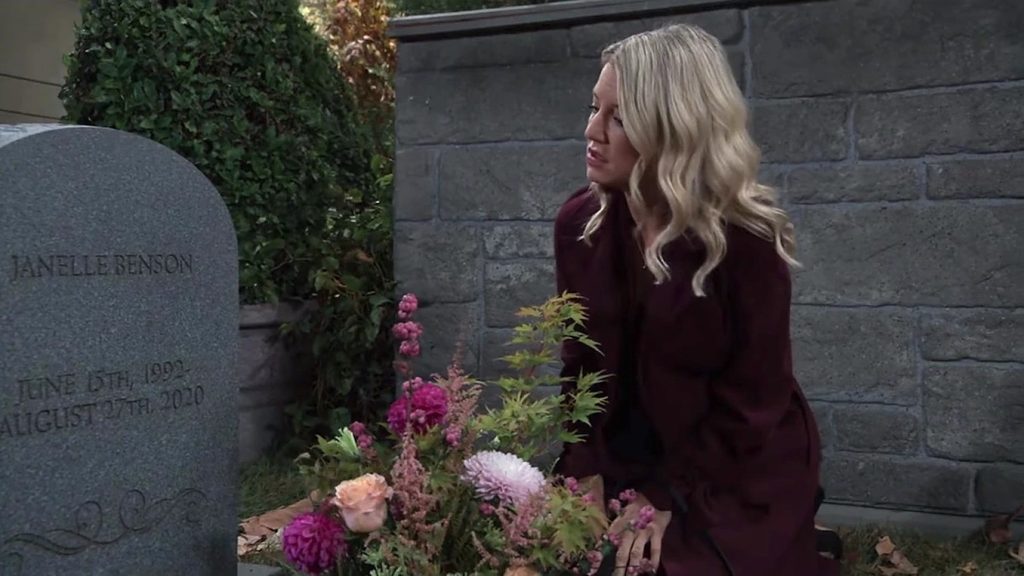 General Hospital spoilers for September 6, 2022, reveal that Trina will push Spencer to come clean. She will want to hear the entire truth. Next, Marcus will reject Sonny’s offer. More-related spoilers say that Selina will offer Sonny a deal. Over with Willow, she will bump into Nina at Nelle’s cemetery. Lastly, Carly will promise herself something. Let’s read further to know what all mysteries are to uncover in today’s episode.

At the party, General Hospital spoilers say that Sonny will face some troubles with Marshall. He will try to throw Sonny out of Trina’s party. This will lead to some conflicts between them. But Curtis will come at the right time to stop those two. Later, Sonny will have an offer for Marcus. However, Marcus will reject it. Further, Selina will approach Sonny with another offer. After she explains to him her plan, he will assure her to keep her offer in mind. Whatever it is, Sonny will know that he has to watch his steps as Selina’s reach is very powerful. In the meantime, he doesn’t want to get involved in any risky business of hers.

Elsewhere, TJ will suspect the whole incidents surrounding Stella. He will share the same with Jordan that something is off with Stella. He will also mention Stella’s mysterious ancestry in Port Charles. However, TJ doesn’t know that Trina is Stella’s real granddaughter. As for Jordan, she will join the dots and will learn that Curtis is Trina’s father.

Across the town, Stella will soon get a surprise. Curtis and Portia, as they decide to get married, Curtis will need a help from Stella. He will ask her to help in preparing for the marriage. Possibilities are there that she will be the wedding planner.

Further on General Hospital, Trina will push Spencer to come clean. Now that Trina has the letter, she will ask Spencer to spill the truth. However, Spencer will like to tell her about everything. But, when he starts to make a confession, someone will interrupt and block their conversation. Whatever it is, it looks like as much as Trina wants to let go of her feelings for Spencer, she just won’t be able to do it.

Over with Willow, General Hospital spoilers for September 6, 2022, say that she will bump into Nina at Nelle’s cemetery. She will sympathize with Nina on Nelle’s death anniversary. Not just that, she will also be thankful for her because, if it weren’t for Nelle, Wiley would not exist. However, Willow will continue to be unaware of the fact that Nina is her biological mother and Nelle is her fraternal twin sister.

Later in the episode, Carly will end up visiting the cemetery. Both Nina and Carly will have a showdown there. As far as Carly is concerned, she knows it too well that Nina is Willow’s biological mother. So, fans can expect Carly to assure Michael that she will protect Willow.

In the meantime, she will also promise herself that she will protect Willow by not telling her the truth about Nina being her bio mom. Looks like the storyline is getting more twisted day by day. Stay tuned and watch General Hospital, it airs every weekday on ABC. For more updates and spoilers, visit our website, TV Season & Spoilers.