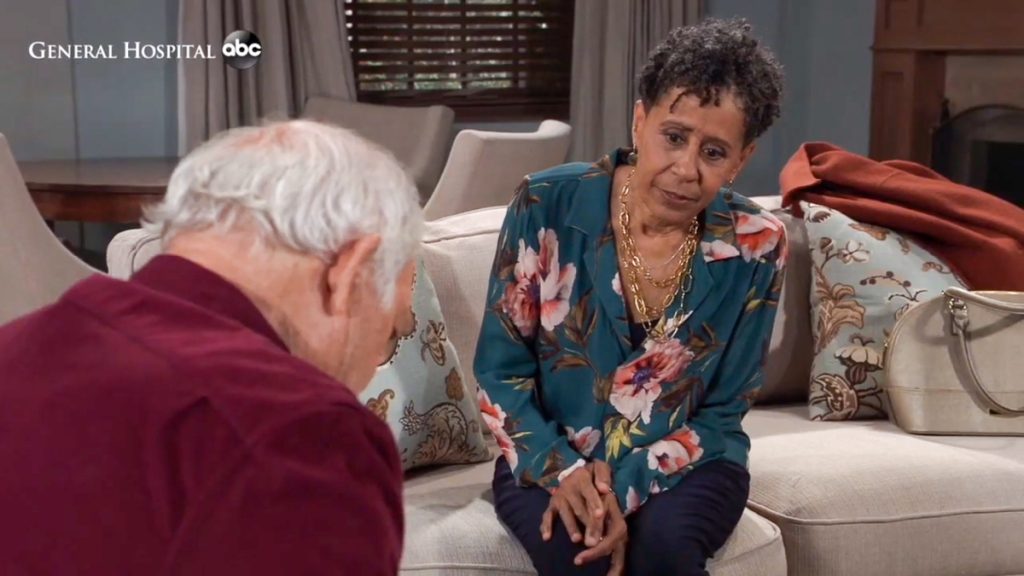 General Hospital weekly spoilers from September 5-9, 2022, reveal that Willow will get a nightmare while many other Port Charles residents become suspicious. Ava’s attacker is still on lose. So, there will be a state of fear in the town. GH spoilers say that Sonny will suspect Nikolas to be Ava’s attacker. Elsewhere, Curtis and Portia will celebrate Trina and also their engagement. Elsewhere, Victor will flirt with Lucy and Felicia will come up with the theory of Cody’s possible biological father. Let’s read the entire article and see what is brewing in Port Charles.

Next week, starting from September 5-9, 2022, Curtis and Portia will throw a party. The couple clearly has many things to celebrate. General Hospital spoilers say that they will celebrate Trina’s freedom and also their engagement. However, Curtis wants things to move things forward soon. Owing to this, he will contact Stella to move forward with the wedding arrangements.

Elsewhere, Brook Lynn will cross the line. Harrison will ask her to watch her steps. Whatever it is, the mission to take down Linc Brown might take some more time. The spoilers also tease that this new couple will face some tensions down the line. Speaking of couple troubles, Sasha and Brando will also face some difficult news. This might be due to some legal situations. In the meantime, Sasha’s career will also bring some bad updates. Ultimately, the couple will again get into a conflict.

On the other side, Dante and Sam will celebrate their officially moving in together. After so many problems and second thoughts, they will finally move in together. Celebrations are on the cards but so is suspicion. General Hospital spoilers confirm that Felicia will come up with a new theory. The spoilers hint that Felicia will suspect that Mac might be Cody’s biological dad. Later, she will ask Mac to have a conversation with Cody and possibly have a DNA test. As for Cody, he will approach Selina Wu. Despite knowing Selina’s power in Port Charles, he will come up with a risky demand.

More General Hospital spoilers say that Maxie will confront Britt and ask her the reason for not accepting Cody. Further on GH, Jordan will go over what TJ witnessed in the hospital. Looks like TJ will come across something related to Ava and her visitors at the hospital. He will pass on the clue to Jordan, which will make her more suspicious. Later, Rory will take Jordan’s advice on something. Elsewhere, Trina will end up making a mess for someone.

Sonny’s Desperation To Find The Culprit; Victor Flirts With Lucy

Over with Sonny, Marcus will reject his offer. After that, Sonny will have an argument with Victor. He will suspect that Victor might be the attacker. General Hospital spoilers say that Victor’s slippery character will simply lead him to ignore Sonny’s accusations. However, he will start flirting with Lucy.

Related spoilers say that she is there with him in order to find what Anna needs. Once she is done with that, she will tell Victor that she is not at all interested in him. Possibilities are there that Victor and Lucy might seriously get some romantic sparks down the line. If that happens, Lucy and Martin’s relationship will be ruined.

Speaking of Anna, she will ask for Robert’s help in dealing with Victor. Over with Willow, she will get some nightmares. She might see herself dying after not getting proper treatment. Back with Sonny, he will confide in someone and will grow suspicious about Nikolas. Initially, he was suspecting Victor, and now it’s Nikolas. What made him change his mind? We will know that.

Next week, Ned will get concerned for Brook Lynn. He will have some serious thoughts about Brook and Chase’s relationship. Speaking of relationships, Cameron will plan a romantic evening for Josslyn. He will hope that Josslyn will like his surprise. But, things will soon take a turn for the worse.

Josslyn already had problems with him for hiding Spencer’s plan from her. Will his efforts soothe Josslyn’s heart? We will have to wait for it. Until then, watch General Hospital, it airs every weekday on ABC. For more information on spoilers, visit our website, TV Season & Spoilers.