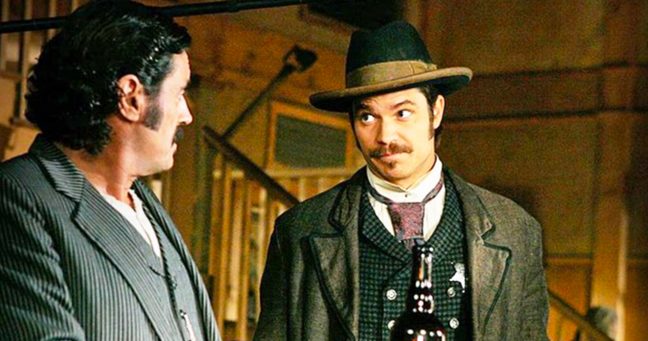 The audience has been waiting long for the Deadwood: The Movie. HBO confirmed about the Deadwood Movie back in the summer of 2017. The announcement was made at the Television Critics Association summer press tour. The film will act as the conclusion of the three-season HBO series.

The Deadwood series debuted in 2004 on the premium cable network HBO. The show aired for three seasons but got canceled for a final run. It’s been 13 years since the drama left HBO. However, the movie will wrap up all the events which were left unconcluded in the series. David Minahan will direct the film, he led some of the episodes of the series as well.

Deadwood: The Movie – Teaser Out Now

HBO released a teaser for the movie on March 21, 2019. The teaser featured all the iconic stars reuniting for the film. The teaser is fully packed with intense action and suspense. This signals that the movie will be full of severe drama and will provide a historic end to the series.

Deadwood: The Movie – Star Cast Returning From The Series

HBO programming president Casey Bloys also talked about the star cast. He stated that it’d been a logistics nightmare getting all the cast members’ schedules altogether.

Moreover, Deadwood Movie will also feature some fresh faces in the movie. Back in November 2018, Tony Curran flashed the news of completing the filming work for the film. Though, his character in the film is still a mystery to unravel.

That’s a Picture WRAP on @deadwoodHBO for me at least. A real pleasure to be part of such an incredible show. An amazing cast & crew, real dependable cocksuckers! #Deadwood #DeadwoodtheMovie #Statehood1889 pic.twitter.com/lYl3gR3RLo

What Fans Will See In The Movie?

The movie will feature years after in the chronology of the series. Time did not stop in the 1870s South Dakota mining town, where the TV series and even the movie is set.

The movie will witness South Dakota officially joining the United States of America. Former Rivalries will open once again in the film to have a showdown. The alliances get tested as the modernity and time brought change to their lives after more than a decade.

According to McShane, the change in the lives of the characters was necessary to happen. He stated that Statehood Difficulty made characters to move on, these are little changes which are great.

Ian Reviewing The Movie As “OK”

Ian McShane put forth his views about the film when he talked with Collider. According to him, the movie is OK. However, he also warned his fans not to expect an episodic piece from the film. Ian stated that it’s difficult to make a two-hour movie of an episodic TV. Meanwhile, it doesn’t affect the Deadwood fans as they have been waiting for ages to see the story getting concluded.

The teaser trailer also came along with the premiere date of Deadwood. HBO has scheduled the movie to release on May 31, 2019. Stay tuned for the updates.