An Assassin like John Wick, who kill people on his will and is a nightmare for his enemies doesn’t seem to be like a person who prays for forgiveness and solitude. The latest image for the John Wick 3: Parabellum has teased some godly sentiment in our not so retired, John Wick.

In the recent image of John Wick Chapter 3, we can see John sitting with an unknown person, holding a crucifix in his hand. The dead eye look in this image is what we regularly expect from this mighty killer. The picture teases some new theory for the upcoming installment of this mega action thriller. 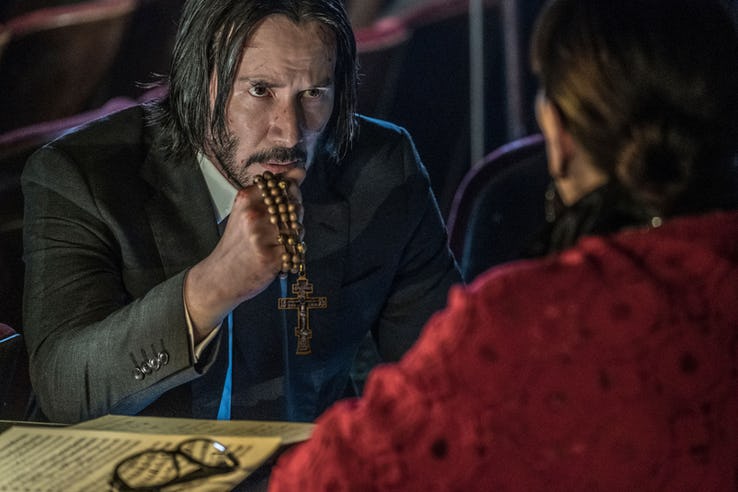 John Wick Praying For Some Help?

In John Wick Chapter 2, we saw John getting in all sort of troubles. The assassin who can’t stay retired acted in his usual manner and killed someone. But, this time his target was a member of a secret assassin society – High Table. Though this seems very reasonable of John Wick but he killed the person at the Continental – a declared neutral zone. Therefore, John has a bounty of $14 Million over his head.

This has left John in deep trouble and taking religious help or seeking forgiveness might be a way to calm him. However, John doesn’t do anything without an agenda, and this will be exciting to discover in John Wick: Parabellum.

By killing a person on the neutral ground and having a $14 Million bounty on his head, John has ensured that he has not left with many trustworthy Friends. Moreover, we saw in the first installment of John Wick that what happens when you kill someone at the Continental. However, John is not an easy target. The whole system scares of John’s will, and thus an epic battle is awaited in John Wick 3: Parabellum.

The recent image can be intercepted as John Wick finding a new Allie. John surely needs one when he feels the threat on his life – this time the most. John Wick is expected to take the most unlikely way when it comes to life and death scenario. Therefore, we can consider this to be a part of a life-saving plan.

Director Chad Stahelski while talking with USA Today said that the 3rd installment of the series would reveal some more secrets about the origin of John Wick. We did hear some stories in the prior installments of the series. However, the story is yet to be completed. Stahelski also added that the character like John have to suffer and the pile of bodies lying at the end of the film will be far from imagination.

John Wick Chapter 3 is one of the most awaited movies of the year 2019. Everyone is eager to see John Wick back in heart-stopping action. John Wick 3: Parabellum is set to premiere on May 17, 2019.remiere on