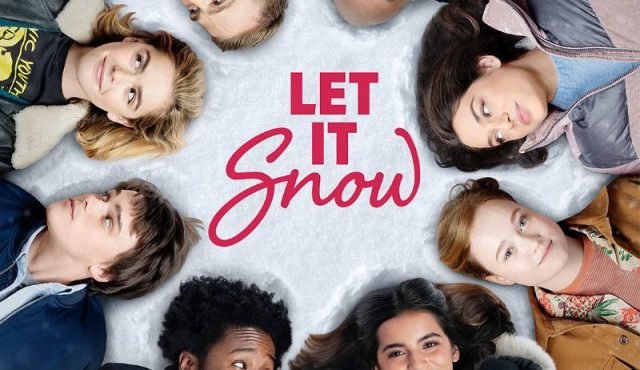 Netflix is all ready to give us our Christmas present, and this time it’s sweeter than ever. With a magnificent young star cast, the streamer’s new film Let It Snow looks pretty promising. Get ready for crazy adventures this year with the highly-anticipated teen drama based in Canada. As of now, here’s everything we know about the movie.
The popular streaming platform recently announced the release of the film on its social media platform. The upcoming Christmas film has one of the most exciting young star cast. Moreover, the cast members went on to share the official poster on their social media accounts, as well. Fans are already excited to watch the film. The Netflix Original film will be one of the most important Christmas ventures of this year.

What Is It About?

The teen film is based on a famous novel published back in 2008. Let It Snow: Three Holiday Romances by John Green, Maureen Johnson, Lauren Myracle, gained much popularity in the last decade. The young adult fiction book comprises of three separate stories that intertwine with one another. Netflix will adapt the stories in the form of a single film with a bunch of popular actors.

Universal officially optioned the rights to the novel back in 2014. Years later, in 2016, Luke Snellin was called in to direct the film. By December 2018, Netflix gained the rights, and the movie was set to release on the streamer. The productions of Let It Snow began back on February 1, 2019, and continued till the end of March. The cast and crew of the Christmas Special wrapped up the shoot in barely two months.

Alongside the official poster of the Christmas film, Netflix also shared the plot. Interestingly enough, the movie will follow the story of a bunch of teenagers in a small town. Based on the filming location, chances suggest that it can be set in Canada. Let It Snow is about a once-in-century snowstorm that hits the small town. Moreover, we may get to see the drama it creates in the lives of the characters.

The much-anticipated film is set to have one of the most exciting young star cast of all. A bunch of popular young actors has joined in to play major characters. Moreover, one of the main highlights has to be Kiernan Shipka, who stars in Netflix’s trendy series, Chilling Adventures Of Sabrina. Besides the iconic witch, Shipka is also known for her roles in Mad Men and 2019’s The Silence.


Other famous cast members include Santa Clarita Diet fame, Liv Hewson, and Isabela Manor from Dora and the Lost City of Gold. The Perks of Being a Wallflower fame Joan Cusack and Goosebumps’ Odeya Rush have major characters to play. Jacob Batalon and Shameik Moore from the Spider-Man series are also joining the cast. Mitchell Hope (Descendants), Mason Gooding (The Good Doctor), Mason Gooding (The X-Files), Anna Akana (Big City Greens) will also be seen in the film. On the other hand, Victor Rivers and Genevieve DeGraves will also be present.

When Wil Let It Snow Release?

Netflix may take a while to release the official trailer of the film. However, it has given us the premiere date already. Let It Snow is all set to hit the screen on November 8, 2019. The Christmas Special movie will be available for all Netflix subscribers around the globe.