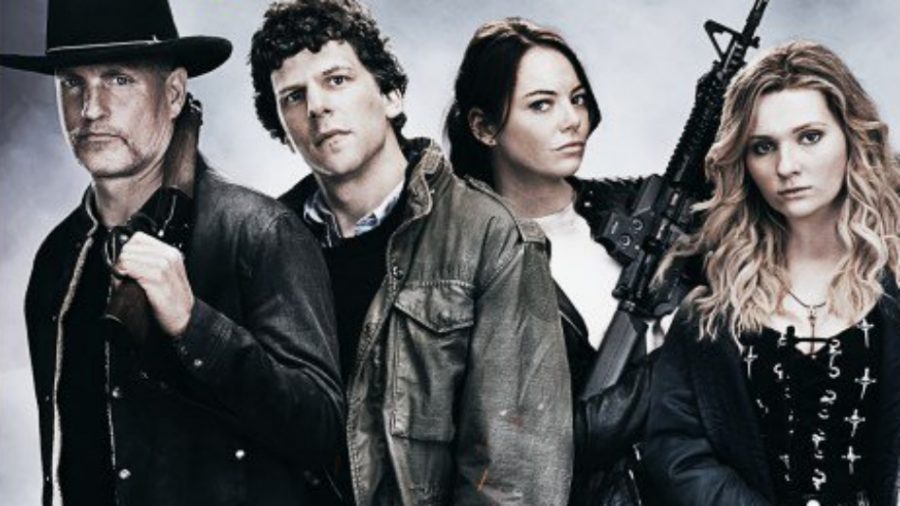 Its been a decade since the undead wandered through the scary yet  funny Zombieland. Since then rumors took flash about the sequel, Zombieland 2. Meanwhile, there is a good news for the fans. The production studio has finally announced the sequel of the movie. The announcement came thought the twitter handle of the movie franchise. The tweets says Ten Years Challenge Accepted.

Zombieland is a post-apocalyptic zombie comedy film scripted by Rhett Reese, Paul Wernick and David Callaham. The movie premiered in 2009 and created a stand-alone level for zombie movies. It also received 90% by Rotten Tomatoes (that is hard to achieve).
The tweet also featured the first look of the movie as well as the title- Zombieland: Double Tap. In the poster, fans can see the core cast members returning for the sequel. The poster features Columbus (Jesse Eisenberg), Tallahassee (Woody Harrelson), Wichita/ Krista (Emma Stone) and Little Rock (Abigail Breslin). Ruben Fleisher (Venom) will be returning as the director of the sequel movie as well. The pre production of the film began in February 2016, as announced by the writers.

The production of Zombieland: Double Tap started in January 2019. Jesse Eisenberg revealed that the filming of the sequel is going pretty well. He also added that the cast is working so hard to replicate the fans’ positive reaction that the first movie received. Reportedly the movie is a few weeks away from wrapping up the production.

Other than the four stars of Zombieland, several new characters will be joining the Zombieland 2. Zoey Deutch (Set It Up) joined the cast as Madison. She will be seen as the love interest of Columbus. However, in the previous movie, Wichita was Columbus’ ‘The One’.

Rosario Dawson (from Daredevil) will portray Nevada, a zombie slayer. Tallahassee will get attracted to her. Avan Jogia will feature as Berkeley, the epitome of the bad boy musician. Zombieland 2 will also have Thomas Middleditch and Luke Wilson. However, their characters are yet to reveal.

What Will Happen in Zombieland 2: Double Tap?

The movie will feature a significant time lapse. Super Bro Movies has also reported about the plot of the sequel. According to that,White House will be their temporary resident place, to rescue themselves from the zombies. Meanwhile, the undead will still plague the outside.
While a dispute between Columbus and Wichita, Little Rock will run away with one of the new characters. Each of them will try to find her and will eventually end up on a road-trip looking for her. On the rescue mission, they get to know about the new kinds of zombies. The zombies are also evolved in due course of time. They are Homers- The dumb ones, Hawkings- The smart ones and Ninjas- The deadly ones. It’ll be a hell lot of fun to see how the zombie killers will save themselves and meanwhile save the Little Rock.

According to the speculations, the crazy zombie movie will again collaborate with the Ghostbusters team. The Ghostbuster star Bill Murray died in the first Zombieland movie. By this, he made a cut-through path for the next film. Now, he would come back as a familiar undead zombie. Zombieland: Double Tap would also feature a cameo of Bill’s Ghostbuster co-star Dan Aykroyd.

When will Zombieland: Double Tap release?

Zombieland: Double Tap is one of the most awaited movies of 2019. Sony Pictures will release the movie worldwide. The movie is scheduled to hit big screens on October 11, 2019. That day will be the 10th anniversary of the first Zombieland movie.