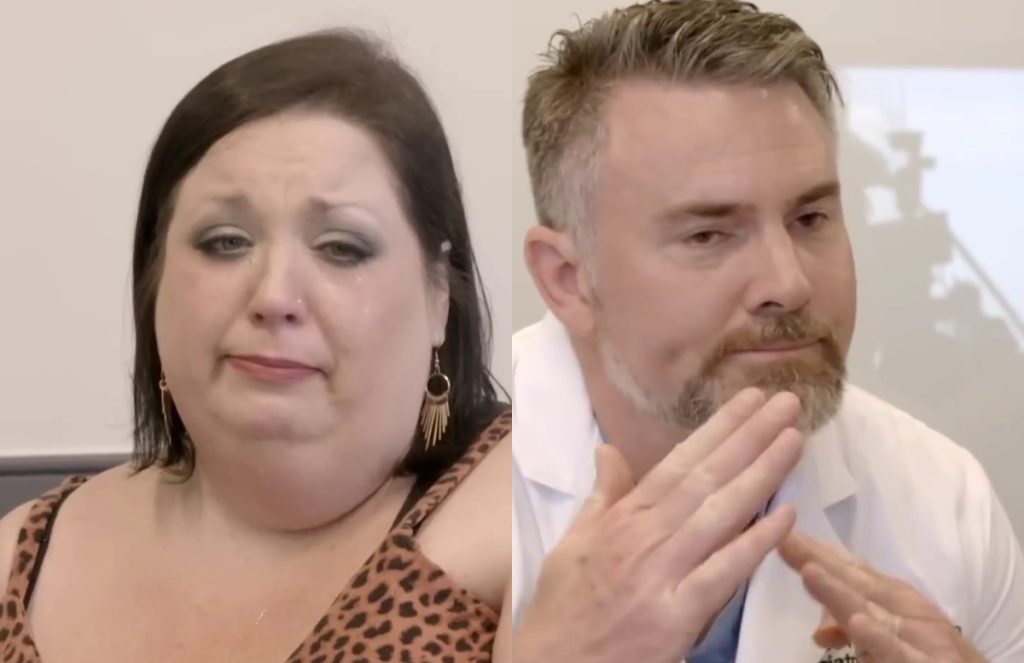 The popular TV show 1000 Lb Best Friends chronicles the lifestyle of Meghan Crumpler and her closest friends. All the cast members struggle to lose weight in the show. However, Meghan already has her weight loss surgery before appearing on the show. But she has not yet reached her goal. TLC has finally released the trailer for the upcoming season, and fans are early waiting to feature it. However, in the promo video, Meghan is getting ready for her big day. She went on shopping for her wedding with all her best friends. Although, seeing her struggling with her wedding dress made her concerned about her weight. So she recently went to see Charles Procter, her doctor and left feeling hurt. Let’s find out what caused her meltdown.

Meghan Crumpler, the star of 1000-Lb Best Friends, broke down on camera after speaking with Dr. Procter, who criticized her for her actions. Recently TLC resealed a new video clip from the upcoming season. However, in a scene, Meghan returned to Dr. Procter’s office to talk about her progress but expressed disappointment that her last visit had not been nice. She “didn’t appear very happy,” the doctor said. And Meghan went on to describe how, at her last appointment, she had been upset by what he had said and had begun to tear up. Meghan said that she gets a little triggered when she hears certain things. Moreover, she said that she went into a dark place on her last visit.

The 1000 Lb Best Friends star continued to say that during that visit, she only heard that she was a failure, which has stayed with her since then. Procter tried to look into the issue again as Meghan started to cry and noted that she hadn’t had “a single follow up visit”. Meghan was shocked to learn about it and struggled to control her emotions as she defended herself. However, fans blast out to the comment section taking her side. One fan said the doctor should have been more empathetic as Meghan is very sensitive. Others noted that in such cases, people need to hear some positivity and sympathy to get back on the right path. But the doctor’s attitude was hurtful, they stated. While others took his side and said it wasn’t his fault for how she felt about her body and progress. And as a doctor, he did what was right.

1000 Lb Best Friends: Meghan Didn’t Want To Step On The Scale, Storms Off At Friends

1000 Lb Best Friends personality Meghan walked out of the shooting after refusing to weigh herself following an altercation with Doctor Proctor. Meghan Crumpler started crying as she said her weight reduction journey had “disappointed herself.” She claimed that she “hates this battle”. However, the doctor informed her that she had to take charge of her life as she wiped her tears. She also lost her temper with her friends when they insisted on stepping on the weighing scale as she hadn’t weighed herself in the last six months or even visited Dr. Charles. Her friends were concerned that she could have put on weight since her final weigh-in, but it turned out that she had gained about 12 pounds in that time.

Meanwhile, Ashley Sutton said that she had purchased the group’s weight loss journey so they could keep track of their progress, the foods they consume, and their moods. However, to start with, they decided first to check their weight. But Meghan opposed doing that and said she would do it in person. However, her friends seem to be very annoyed at her behavior. And they all started to fight over it. Meanwhile, Ashley yelled at her and said that she understood that her last visit to the doctor triggered her, but she didn’t want to step on the scale because she had not lost any weight in reality, and now she is ashamed of it. Stay tuned to TV Season & Spoilers for further updates.