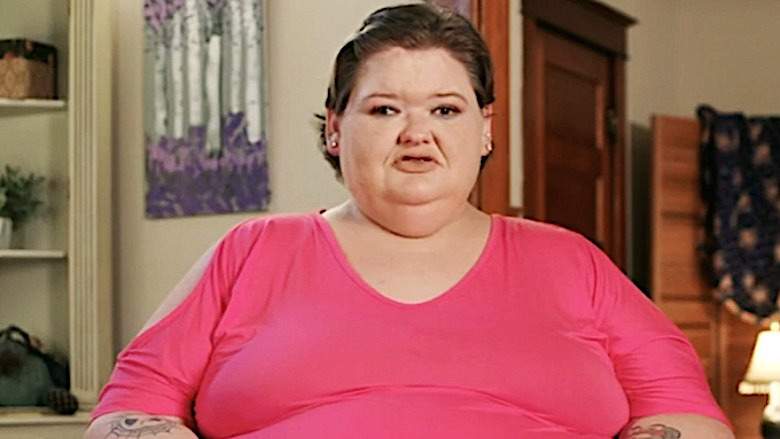 Amy Slaton from 1000 Lb Sisters is adjusting well to motherhood in the new season of the reality show. Earlier, people had seen her act like a guardian with her sister Tammy Slaton. The irony remains that Tammy is the eldest sibling out of the two. Now the star is putting her best foot forward and prioritizing her newborn son, Gage, and husband, Michael Halterman. Despite so many positive changes, some things that still bother Amy. Apparently, she wants plastic surgery. Why so? Keep reading for the whole story.

TLC released a promo from the forthcoming 1000 Lb Sisters episode. Leading cast member Amy Slaton was spending time with her family in the clip. She began talking about her body image issues. Although the reality star has undergone weight loss surgery, she still feels “unattractive”. She reveals that the bariatric surgery left her with a ton of excess skin. Hence, doing any physical activity, i.e., things as easy as walking, wears her out.

Halterman started her journey in the show with 600 lbs. The celebrity informed everyone that she is currently at 250 lbs. Apparently, her goal is 150 lbs. TV Season & Spoilers points out that thus, she is working very hard to shed it. Amidst this, the cast member talked of getting plastic surgery. It will help her get rid of the excess fat and look more toned. Eventually, Amy said she wanted to research a plastic surgeon who would help her out. She wants to remove fat from her chest, neck, and arms. However, the TLC star’s husband, Michael, kept boosting her confidence by saying she looked fine. He was sitting next to her during the discussion.

1000 Lb Sisters: Amy Concerned About Newborn Son’s Weight; Wants Him To Be ‘Normal’

In the promo segment, Amy also addressed her newborn baby boy, Gage. She called him a “well-mannered” kid. Yet, the new mom is concerned about his weight. She emphasized and said that he reminds him of her elder sister Tammy. Both share similar eating habits, and the reality show star described them as “bottomless pits”. As a result, she is concerned about her little one gaining weight like her and her sister.

The famous sister let her walls down on the clip and admitted she wanted his son to be “normal” and healthy. She explained that both the famous siblings had to struggle a lot with their weight. Hence, she doesn’t want the same thing for her son.

Moreover, she was also bothered about her child being a victim of bullying in the future. Amy believes that if her kid is a bit on the heavier side, everyone will make fun of him in school. She also confessed that his firstborn means “the world” to her, and she wants the “best” for him. Keep checking TV Season & Spoilers for further 1000 Lb Sisters updates.