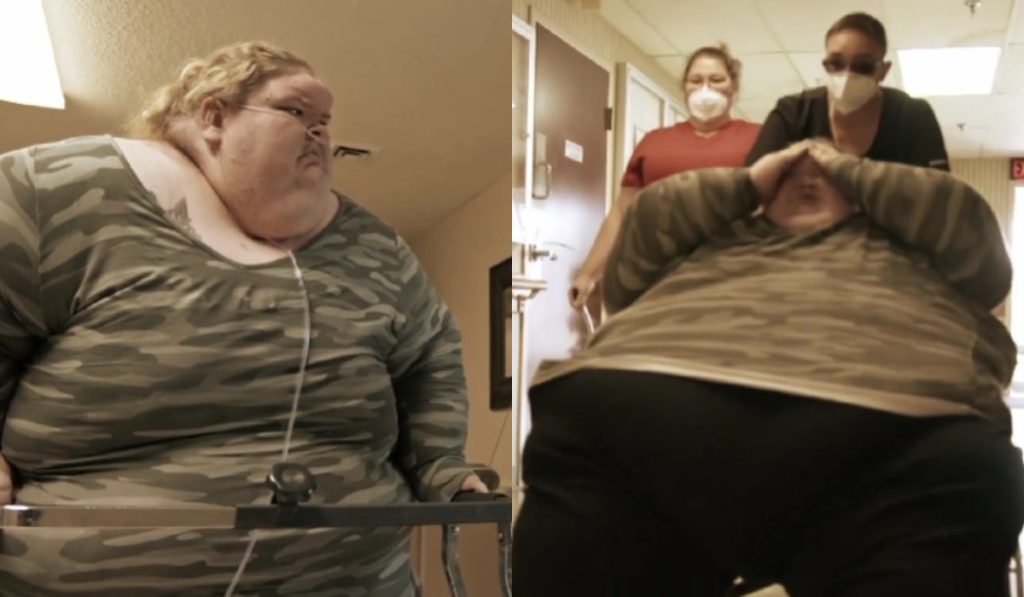 1000 Lb Sisters: Tammy Got To 717 Lb After Serious Weight Gain! “I Weighed The Most I’ve Ever Weighed”

During her debut on 1000 Lb Sisters, Tammy Slaton came off as being incredibly challenging. Despite repeated encouragement from her family and doctors to lose weight, she always relapsed. The upcoming season, nevertheless, holds out hope for a change on her part. In the show’s teaser, Tammy was shown in rehab making a self-improvement commitment. However, before that happened, she had to face a terrific truth of her life. Tammy discovered her shocking weight gain in the sneak peek video of the Season 4 Premiere. She, however, got shattered and broke into tears. She was immediately rushed to the hospital and included in a medical coma. Let’s find out when she got blacked out.

Tammy Slaton is finding it challenging to deal with her current health issues. The 1000 Lb Sisters star gets emotional as she remembers her weight gain the day she entered rehab and how it resulted in her being hospitalized. The People released an exclusive video from the new season’s premiere, where Tammy gets to know her shocking weight gain. The video st arts with Tammy’s confessional interview, where the producer asks about her emergency rush to the hospital. However, Tammy claimed that she did not remember any of it and completely got blacked out. She continued by telling that she woke up after a week in the hospital on life support. But she doesn’t remember what happened in between that.

The video then turned to the day she was taken to the rehab center. Tammy said that she decided to go back to rehab two months ago. However, reaching the center, she discovered that she had weighed the most she had ever weighed. And doctor revealed that she is 717 lbs. “I just don’t feel good”, Tammy said as she burst into tears. Tammy described her arrival at the Ohio weight loss rehab center in the video. She was struggling with excessive drinking, vaping, and depression, so returning was a difficult choice for her. She describes the day when she was rushed to the hospital. Tammy said her oxygen level was dropping, and the doctors put her into a medically induced coma. She was blacked out, but she could hear the voices of her family member. However, she woke up a week later and was doing better.

1000 Lb Sisters: Tammy Is Finally Working Heard On Herself, Fans are Impressed

Since the first season of 1000 Lb Sisters, fans have been concerned about Tammy’s health. As the season passed, her body tends to give up. She even had a near-to-death experience. On one side, where the season features her cheating on her death episode, on the other side, her TikTok videos flaunt her new weight loss transformation. Caleb Willingham, Tammy’s husband and a fellow patient in rehab, recently posted a video of his wife working through the night to save her life. The TLC personality was seated in a wheelchair exercising on an aerobic machine for her arm reduction. Slaton kept up a strict exercise regimen and refused to let her oxygen tank get in the way.

The caption said, “My ANGEL hard at work”. However, the star has unquestionably become a role model and an inspiration to many. As a result, the 1000 Lb Sisters star is receiving positive feedback from her fans. Additionally, fans praised Slaton on Reddit after posting this news. A user said they were quite proud of Tammy and thought it was great for her. Many fans of the 1000 Lb Sisters appear to be really pleased with Slaton’s decision to finally take her life seriously and make an effort to live. Many others also commended Caleb for giving her the care and encouragement she so much needed at this time. Keep coming back to TV Season & Spoilers for all the latest 1000 Lb Sisters updates.