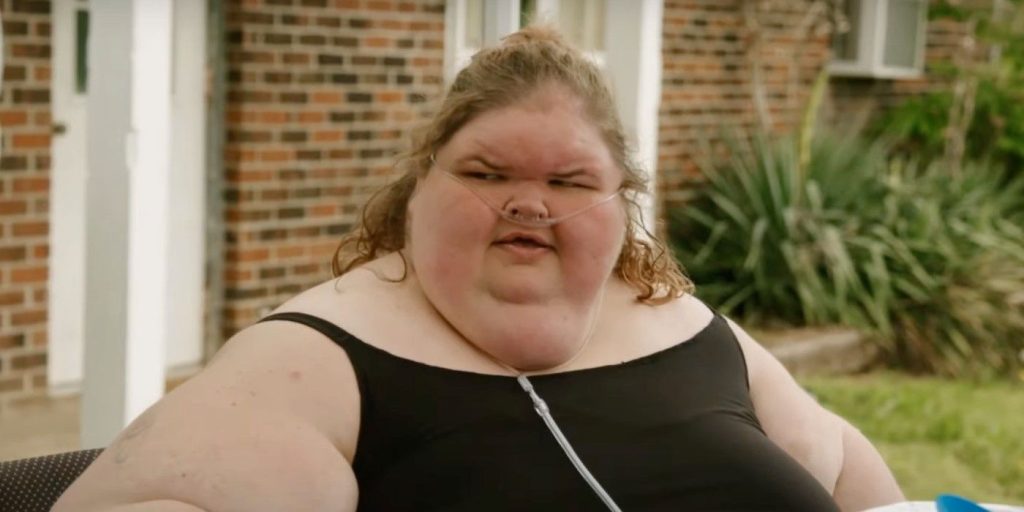 Tammy Slaton has been climbing the stairs to progress lately. That’s because she has finally gotten her wake-up call. Moreover, the 1000 Lb Sisters star is not willing to stop at anything from deviating from her weight goal. Towards the end of 2021, her ailing health was so bad that she had to take a trip to the hospital due to breathing difficulties. However, her new video reveals that she has shed around 115 Lbs since! Keep scrolling to take a look at the newly improved reality show celebrity!

Tammy Slaton failed to be a fan favorite since 1000 Lb Sisters began premiering on TLC. Apparently, viewers disapproved of her rude attitude and indifference to shed weight before it harmed her in the long run. However, things have taken a 180-degree turn since. That’s because the TV star had to take a trip to the hospital in November 2021 due to carbon dioxide poisoning. Moreover, she also went into a medically induced coma due to it and had to undergo a tracheoscopy. After such a health scare, the celebrity immediately went to rehab to bring change in her life.

It looks like her hard work is paying off. That’s because she seemed slim in her new video on Instagram. Moreover, the celebrity made a post showcasing her entire body while claiming she has lost 115 Lbs since she checked into the specialized nursing facility. Therefore, her well-wishers were extremely happy that she made such vast progress and continues to keep at it. It was almost unbelievable for them as the celebrity has only deteriorated in her reality show journey in 1000 Lb Sisters so far. Despite this, they filled her comment section with sincere wishes and compliments.

Tammy has a trachea tube attached to her neck and went through poisoning as well as a coma. Hence, viewers assume these experiences have made her weak. Moreover, they took to social media to speculate that the facility might urge her to stay longer. That’s because they want the 35-year-old to make better progress and gain her strength back. Since the famous sister has been doing so well by losing 115 lbs in a month, viewers are now positive They’ve begun to believe she has what it takes to qualify for her bariatric surgery.

Moreover, significant time has passed since the 1000 Lb Sisters season finale. Hence, the fans believe she can now shed the right amount of pounds. Then, the cast member can finally qualify for weight loss surgery by the end of 2022. However, it would only be possible if the Slaton sibling continued staying at the rehab for the whole year. So far, she has not yet disclosed her future plans to her audience through her Tik-Tok health updates. However, they now trust the star for knowing what’s best for her. Keep checking TV Season & Spoilers for more such 1000 Lb Sisters news.