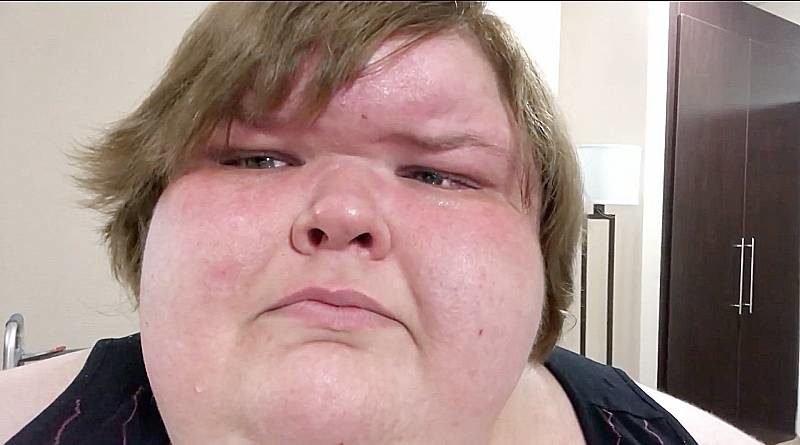 All 1000 Lb Sisters fans are pretty much done with Tammy Slaton by now. People think that she is by far one of the most problematic contestants to come out of the reality show world. Despite landing herself in trouble too many times, she never seems to learn! This time the TV star has claimed that she is ‘treated like an animal.’ What went down? Why did she say so? Keep reading to get your daily dose of TLC tea!

1000 Lb Sisters: Tammy Claims Her Family Treats Her Like An Animal!

A lot has changed in the new season of 1000 Lb Sisters. Firstly, Amy has too many additional responsibilities. In addition, she is consistently trying to lose weight after having her first son Gage and also experiencing motherhood. Secondly, Tammy is back from rehab but has shown no signs of taking her weight loss seriously. A new TLC clip from the latest episode featured Amy, Tammy, and their half-brother Chris Combs having a conversation. In it, their brother and the younger Slaton sibling agreed that Tammy is a nuisance. When she wants something, she wants it instantly. Moreover, she lacks compassion for her younger sibling, who is also raising a kid now.

As Amy doesn’t have the time to take care of her sibling, they decided to hire a nurse for her sister. This made the toxic cast member outraged. Instead of contemplating her flaws, she began to bash her family. The eldest Slaton said that her family doesn’t trust her enough to lose weight on her own and has resorted to hiring help. Tammy expressed she feels ‘invisible’ and that her family “treats her like an animal.” Moreover, she wants her dear ones to realize she is “a human” after all. But the 35-year-old has shown no positive change. Thus, the rest of her family wanted to hire a caregiver.

1000 Lb Sisters: Caregivers Not Ready To Bear With Tammy Due To Her Bad Attitude

Amy Halterman stated that she would be hiring a caregiver for her elder sister. She simply cannot handle taking care of her sister along with her 6-month-old son Gage. As a result, they put out a word for the same. Unfortunately, only 3 people turned up. This made the responsible sibling very worried. She believed that other individuals from the field must know about her sister’s ill manners and rude personality. Hence, they didn’t bother to show up as “people talk.”

Moreover, she worried that her arrogant sister would drive the potential caregivers away due to her spoilt brat-like attitude. While they interviewed the three nurses, Tammy kept asking them for weird favors like going to the liquor store for her. The reality star very well knows that her health is at risk, and consuming the wrong things can make her more severe. She continued with her weird tactics, and this again baffled the fans. However, they are still looking forward to all the drama that will unfold with the new nurse soon.