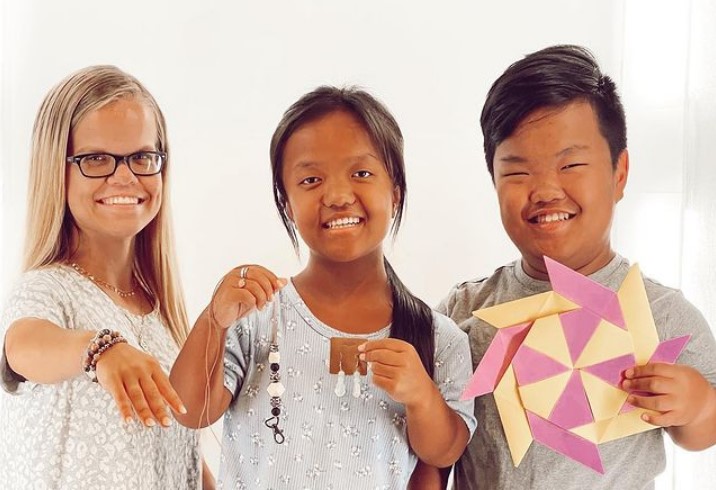 Unlike several other TLC reality shows that run solely on drama, 7 Little Johnstons has fans who love the family’s wholesome content. The Johnston parents, Trent and Amber, and their five kids are all inspirational personalities. As a family of little people, the Johnstons had a lot of challenges to face. Despite that, all five of the children have proved themselves and are quite capable at a very young age. While Jonah has a passion for car sales, Elizabeth is a certified nursing assistant.

On the other hand, Anna, Emma, and Alex are all young entrepreneurs running successful businesses. For fans who don’t know, the three kids run online businesses that earn them well in contrast to their respective ages. Hence, here are all the details about their respective ventures.

Amongst all the Johnston kids, Anna is deemed to be the popular one and has the second-highest number of followers on social media. Professionally, the TLC star is in college and desires to be a teacher in the future. However, the 21-year-old also runs a pretty successful business that is speculated to be earning her a lot already. Anna has a unique jewelry business that sells stone bracelets alongside other types of ornaments and accessories. As of now, the reality TV celebrity has close to 350K followers on her Instagram.

On the other hand, her business called, Fizz4Passion has over 50K followers on its Instagram page. Anna mainly sells her products on Etsy and has a 5-star rating with more than 3,700 orders already. With the help of her TLC salary and a pretty hefty earning from her business, the 7 Little Johnston star has managed to have a huge net worth. While the exact number is still unknown, reports say that Anna Johnston’s net worth could be somewhere between $1M to $2M.

While Anna’s jewelry business is pretty popular and is often talked about amongst the TLC audience, people aren’t aware that Emma also works in the same field. The 15-year-old has a jewelry business of her own, which is almost as successful as her elder sister’s. Trent and Amber Johnston’s second adopted daughter (aside from Anna) runs a business called EmmasRingsnthings. The business mainly sells earrings and rings alongside other jewelry. As of now, Emma has 400K followers, while her business’s page has more than 40K followers.

Like her sister Emma also has a store on Etsy, which is also rated 5-stars. Moreover, she has made around 1050 sales as of today. Fans always appreciated the teenager as she manages a lot of responsibilities alongside her school.

motivated him to start a business of his own. While Anna and Emma sell jewelry, their 15-year-old brother makes handmade origami art for his clients. As of now, his origami business is not as popular as the ones his sisters own. However, compared to other businesses in the same field, Alex’s Etsy shop has a big name and is successful enough for him to be called a young entrepreneur. He manages his business from his personal Instagram account that has over 180K followers.

Alex own runs an Etsy shop that has complete nearly 700 sales and also has a 5-star rating. Aside from origami art, the 7 Little Johnstons also sells unique stickers in his shop. Fans have been proud of all the Johnston kids for turning out to be so capable and are hoping that they continue to reach new heights of success.